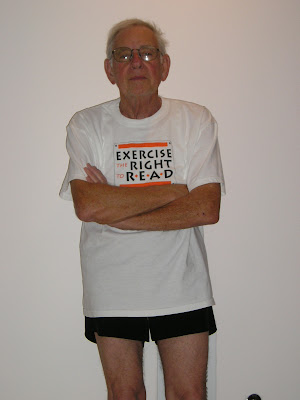 Hi! It’s Mark again, filling in while Wendelin frantically packs for our trip to NY!

Inspiration is where you find it. Take Ed, here. He became inspired to begin running recently. He’d been in good shape all his life, but earlier this year he came to the conclusion that he needed to do more aerobic activity. He and his wife Rosalyn had been walking regularly, but he realized that their walking group (as much as he enjoys their company) wasn’t challenging him enough. He’s a real intelligent, scientific sort of guy and he knew about the tremendous physiological benefits of running, so he decided he might give it a try. And a lot of people might have stopped right there, with that good intention left floating somewhere in the back of their mind. But not Ed. He made the decision to DO it, not just think about it or talk about doing it “someday”, or worse yet, make excuses due to time constraints or age, etc.

We discussed the best way to begin, and I suggested a very conservative, progressive approach. We started with 5 minute walk/run segments, and built from there. (Basically, the same program we describe in the ETRTR educational handout – “5 Easy Steps to Becoming a Runner”.)

That was last February. When he started, some of the other seniors in his walking group said to Rosalyn, “What’s he doing? Is he crazy? He’s going to kill himself!” But he stuck with it, slowly build up his time and distance. (And when he started, he wore his usual walking clothes – jeans and a sweater. But as you can see, he’s now fashionably dressed as a serious runner!)

That was then, nine short months ago. And now? He’s out there every other day, putting in his early-morning miles at the beach. He’s up to 4 miles, currently—quite an improvement from being able to run for one minute—and still improving. He knows about pace and hydration and goo and blowing your nose on the fly without missing a step. All in all, quite the runner, that guy.

And… now he’s my inspiration.
Posted by Wendelin Van Draanen at 7:24 PM