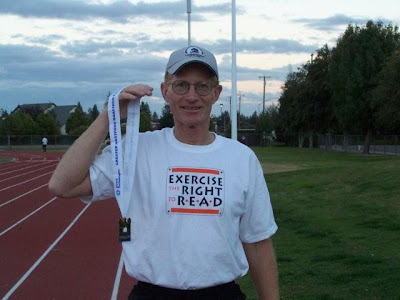 We received this inspirational guest blog from John Volkman, the librarian at Reedley High School in California. Keeping up with him would be quite a challenge!

At last year’s California School Library Association convention, Wendelin was the keynote speaker at the California Young Reader Meal banquet. When she announced that she was going to run the New York Marathon and have a reading program tied to it, I was immediately excited because those are two of my favorite activities. I have now run 87 marathons in 37 states and thought I could tie the program at our school with my running of the Hartford Marathon in October.

To motivate students to participate, I have obtained gift certificates to award to all those who meet the minimum goals, as well as other prizes for the top fundraisers including an Ipod Shuffle. I put together a packet which described the program and included running/reading/fund raising logs and other information about the marathon and exercise. I presented the program in person to all 65 of our tutorial (study hall) classes.

We are having competition between these tutorial classes. The teachers are also being challenged to participate and have been divided into 4 teams. I had the Activities Class draw a large map of the United States on which we highlight the states between Reedley and Hartford. Each day in the bulletin we read one of the reading quotes and mention something of interest about the state of the day.

I challenged those students who wanted to run their individual miles for time to add them up and see if they could beat my 26.2 miles straight time in Hartford which turned out to be 3:43:44 (Boston Marathon qualifying time for me).
Posted by Wendelin Van Draanen at 12:54 PM