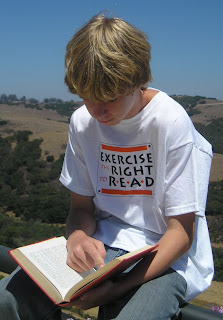 Coast to coast, schools are starting the year off right!

Another exceptional message, this one from a teacher in California.
-----
At May Grisham School in Orcutt, California, we are looking forward to the beginning of school and the start of our exercise! Starting with the first week of school, we are challenging our students to get the word out to as many friends and relatives as they can about Exercise the Right to Read. More than just looking for sponsors, we want to have them help spread the word by phone calls, e-mails and letters.

Besides that, we will start "warming up" for our marathon by doing some pretty exciting daily "crazy" runs. Our idea is to make doing exercise something everyone wants to be part of! We want to get not only a bunch of kids in our school to participate, but help to spread the word.

Our fifth graders are also going to start their year by writing letters to different schools around the country to see if they can persuade them to run and read! We think your idea is awesome.

-----
And we think May Grisham School is awesome!

Are you starting your school year off right? Send us your story, we'll send you a t-shirt like the one in the picture!
Posted by Wendelin Van Draanen at 8:47 AM No comments:

This just in from a reading specialist in New Hampshire: Bedford, New Hampshire is ready to exercise and read! We are a town with 3 elementary schools, 1 intermediate school, 1 middle school, and 1 high school. The district's reading specialists, librarians, physical education teachers, technology specialists are united to get moving and reading right when we get back to school. Each school has designated language arts teachers, known as the go-to Reading Divas, already crowned. The month of August will be spent fine tuning our plans. September will be spent getting the word out to staff, faculty, students, parents and community about First Book, Random House's commitment, the October event, and the New York City marathon that Wendelin and Mark will run. We celebrate Olde Towne Days in September and Team "Exercise the Right to Read" has a booth reserved to inform everybody of this tremendous nation-wide event. October will be spent exercising, reading, and raising funds for First Book. Our family will travel to New York City to cheer on Wendelin and Mark in person catching up with them at different mile markers. Bedford can't wait to get new books in kids' hands! Thanks, Wendelin, for celebrating exercising and reading!! Little plans or big, we'd love to hear what you're doing / planning for Exercise the Right to Read. From New Hampshire to California (to Africa!) we've heard from people who are excited about participating. If you are, too, don't be shy! Drop us a line -- we'll send you an Exercise the Right to Read t-shirt (while supplies last!).
Posted by Wendelin Van Draanen at 10:49 AM No comments:

I found out today that Sunday's Washington Post had a very nice "Book of the Week" review of Sammy Keyes and the Wild Things. Well, wa-hoo! I also got a really nice compliment from my truly excellent sister-in-law about Wild Things. (This woman really is the best. Always supportive and complimentary, smart-smart-smart, and thoughtful. Example: She gave me a bracelet and two silver charms when Sammy Keyes and the Hotel Thief came out, and has bought 2 more charms for every Sammy book since then. I guess she didn't know what she was getting into. Ha! I'm gonna have to convert to a necklace by the time I get to book 20.) Anyway, she read Wild Things and told me that she thinks it's now her favorite Sammy. (Either Sisters of Mercy (#3) or Skeleton Man (#2) was her all-time favorite before, so bumping an early title so late in the series is in itself quite a compliment.) But it was the way she described how I'd wrapped everything up at the end of the story that really made me feel good. I personally love books where all the little things tie together at the end, but doing it takes a lot of planning and plotting and balancing. Authors work really hard at weaving their threads and getting the details just right, so when somebody notices and really enjoys it, it makes you go Aaaaah inside. Aaaaah.
Posted by Wendelin Van Draanen at 9:19 PM 1 comment:

Backing Over Pots and Pans

When I was a teenager, I used my finely honed driving skills to back over some camping equipment that had been left on the side of our family's driveway. The car was not damaged, but some pots and pans were crunched, and it was my responsibility to replace them. Looking back on it, I don't understand why it was so hard to get new ones. Maybe they were a model that was no longer available...but they were just cooking pots for camping, so what did it matter? Maybe I didn't really want to pay for them because who'd left them there on the driveway to get run over, anyway? But it was on me to replace them, and bottom line -- I put it off. I kept those smashed pots in my closet, and every time I opened the door, there they were, reminding me that I hadn't done what I was supposed to do. Many years later I was talking to Mark about something that I needed to take care of and I said, "I've just got to do it. It's making me old." Thinking back through the events in my life, the first time I ever experienced that "making me old" feeling was those pots and pans. I also see them as the edge of the wedge. Oh, to go back to the day where the only thing that was "making me old" was replacing a few pots and pans! But defining and analyzing helps to address the situation; helps you take steps to deal with the things that are weighing on you most. So after re-re-rewriting the "grueling rewrite" book of previous postings, after getting a really great start on the new Sammy Keyes, after sending out letters to people about ETRTR and looking into getting a professional publicist to help out with the campaign, I finally sat down and took care of something that was making me VERY old--fan mail. Oh, my goodness. The accumulated box of letters was daunting and I just didn't know how I was ever going to get through them. I actually toyed with they idea of just chucking them. Who could blame me? Who would ever know? The kids would probably figure I never got their letter. Shoot, they'd probably become someone else's "#1 Fan!!!" during the time their letter had languished in my box. But some of these kids pour so much into their letters. They're so sweet. And the fact is I would know. Talk about making yourself old! Ay-yay-yay! So I had my son help me sort it into piles, then worked from pile to pile. And two weeks of steady work later, da-da-da-DA! I'm done!! What a relief! And it feels good to think that those kids who wrote me will open up their letters and be happy! And I can finally get this box out of my office! Oh, what a glorious day. I feel so young!
Posted by Wendelin Van Draanen at 7:12 AM No comments: