A Shoe In The Door? 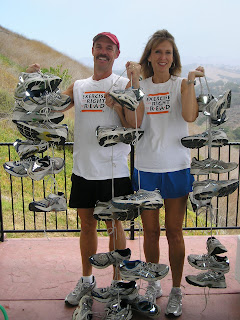 Getting sponsorship is quite an undertaking! If I take it as a whole, it's almost paralyzing. But Mark and I have been taking it bit by bit, and our latest effort has been to contact Asics and send them a copy of this picture. Those are the Asics shoes we've run through this past year.

We're back from a few much-needed days away to San Francisco. What a beautiful city! The skies were clear, and when the winds weren't gusting it was actually warm. Whenever I'm in a new city / place, I like to take a "jogging tour" of the area, so Mark, the kids, and I jogged from our motel down to the water and across the Golden Gate bridge and back. It was about 8 miles round-trip (a bit much for the kids) but what a great run! The next day we walked to and around the Embarcadero, then took a tour of Alcatraz. And the next day we spent in China Town. My ankles /calves are sore! I brought writing work to do, but by the time we were in each evening I was too tired to tackle it. Mark calls time away "sharpening the saw", and he's right -- our saws definitely needed sharpening!
Posted by Wendelin Van Draanen at 9:58 AM No comments:

Cyber Fun For Everyone

Just a quick update: The Shredderman movie aired last night on Nickelodeon. It's the first one of my books that's been turned into a movie, but I was so busy that I did not throw a party. What was I thinking? I got calls from friends and relatives today saying they had Shredderman parties, and I started feeling like I really missed out. Next time! A "Behind the Scenes" segment airs tonight, and my kids are secretly hoping there'll be a glimpse of them in it (because we spent a day "on the set") but I really doubt it. BTW, the whole cast was really great to the kids -- Nolan (aka Ned aka Devin) was super nice to them and Bubba (aka Andrew) is as funny in real life as he is in the movie. There is talk of additional Shredderman movies and if Nick does do one, I hope they structure it around the storyline of the 4th book: Enemy Spy. Andrew/Bubba would be great as Shredderman's sidekick--instead of the guy who's always side-kicking him. Cyber fun for everyone!
Posted by Wendelin Van Draanen at 7:29 PM 15 comments: 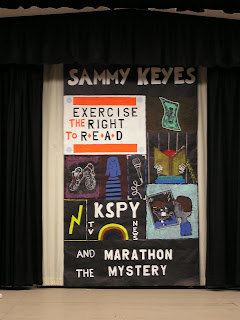 What they'll remember is the extra-curricular -- things like being in the play.
Posted by Wendelin Van Draanen at 9:08 AM No comments: