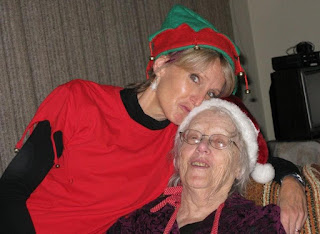 The stuff she never meant to put there in the first place.
Posted by Wendelin Van Draanen at 6:21 PM 10 comments: 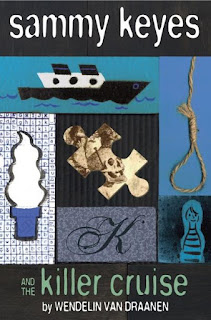 Due to events of last week (which I might get to next Sunday) I'm simply posting my tour stops for the coming week in hopes that some of you are in one of these cities and can attend (and I can meet you in person!).

Oh, and here's a little bribe: there will be some ARCs of Sammy Keyes and the Killer Cruise given away at each stop.

This is a Random House tour called "Life Actually" which features authors of realistic fiction. Those authors will be Lurlene McDaniel, Tom Leveen, Elana Arnold and yours truly in Los Angeles, and Lurlene McDaniel, Dana Reinhardt and me in San Francisco.


If you can make it, I'm happy to sign any books you already own, so don't be shy about bringing your collection.

Hope to see you in person, and if not, I'll meet you back here next Sunday.

As always, thanks for checking in!
Posted by Wendelin Van Draanen at 6:38 PM 27 comments:

The Runner Meets The Road

Happy Mother's Day to the moms among you!

You may recall my post from last year where I shared a previous Mother's Day experience that ranked pretty high in the list of Worst Days Ever (Where Nobody Died).

I told my son that if there was no Lysol sprayed in my eye this year, it would be a great day, regardless if he was late to brunch or...well just about anything else.

Except for the way it started out.

As if beginning the day with a 9 mile run (my dopey idea) isn't torture enough, not far from the turnaround point, I caught my foot on an uneven place in an intersection and went flying. My landing became a sort of unorthodox bone-density test of my knee, hands/wrists, elbow, shoulder and hip.

I'm happy to report that I passed the test with flying colors.

Yes, my bones held up fine, but my skin? Not so much. When flesh goes up against asphalt, you know who's going to win.

A woman driving a PT Cruiser advertising art services for the Lord, pulled up curbside after my husband and son had peeled me up and out of the intersection. She very kindly asked if I was all right. I assured her I was, but she came out to lay hands on me and pray for my healing nonetheless. She was about seventy, had just had a pedicure (orange-blossom toes), wore snazzy little sandals, lacy white leggings and a long, flowery tunic, which was very spring-timey in color.

When her prayer was complete, off she went to what was surely a Mother's Day festivity for hot senior mamas.

Or maybe her church was hosting a brunch for hot senior mamas.

Anyway! Mark and Colton had helped me to planter beside a flower shanty (something between a stand and a store). There was a hose attached to the building, so I took a little public bath, swabbing away blood and little asphalt rocks, and then (after considering my options and foolishly listening to my pride) I plodded the 4.5 miles home.

Not a great start to the day, but the rest of it was very nice.

And at least there was no Lysol in the eye, right?

So how was your Mother's Day?
Posted by Wendelin Van Draanen at 9:50 PM 6 comments: 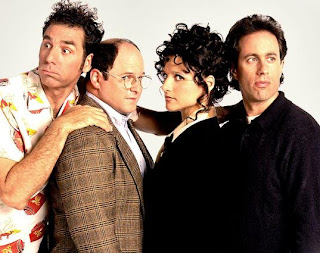 This week I'm going back to that list of questions from my regulars, and picking one from 'Jessica' about writing. She asked how I weave my "50 plot lines together," which I thought was so funny because it sounded "so Sammy."

In reality, there are usually "only" three plot lines in a Sammy Keyes book. Usually these are the mystery, Sammy's home life, and Sammy's school life. Having multiple threads really helps keep the story chugging along. And it allows time to pass in the other story lines without having to deal with filling in time (which is how stories tend to get bogged down). I've discussed before how I use the story's theme to tie the three plot lines together, so I won't delve into that again now. Instead I'll share a secret.

I learned how to plot by watching Seinfeld.

Now, I didn't watch it thinking, Whoa, this sitcom is teaching me how to plot! I didn't take notes or analyze it. I watched it because it was funny. It was actually the only television show (aside from the news) that I watched. Or, I should say, we watched. Mark and I had "real jobs," and did not have the same days off. Watching Seinfeld on Thursday nights became a standing date and something we both really looked forward to.

As with all shows, some episodes are better than others, and after a while I started recognizing that the best ones were both funny and had several seemingly disparate story lines that somehow tied together at the end. Kramer would be off on one of his goofy jaunts, Jerry would be dealing with (say) his parents, George would be involved  in one of his ill-fated schemes, and Elaine would be having some separate crisis of her own. But in the end, zap, all the threads tied together, and in some of those episodes the conclusions are wonderfully satisfying.

Mind you, I didn't realize I was paying attention to the writing, but after years of watching the show, it must've become something I absorbed. And I didn't actually think about how the show had influenced my writing until well after the Sammy Keyes series was under way and people started asking me, Where'd you learn to plot like that? and (having no formal training) I didn't really have an answer. Uh...I read a lot? Uh...Intuition? Uh...I dunno?

But then one day (with a loud click) I made the connection and now I recognize that the (quick and dirty) answer is...I learned to plot by watching Seinfeld. So if you're an aspiring writer and you're sick to death of reading about plotting, go find yourself some Seinfeld. Consider it research.

Thanks for checking in! Hope to see you next week! And as always, I look forward to seeing you in the comments.