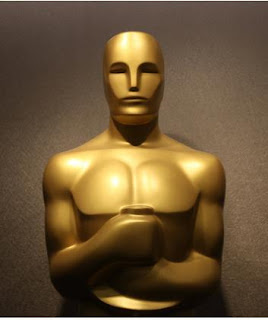 I’m sitting on the couch, eating Cajun trail mix, glad, so glad, I’m not an actress. It’s Oscar night and they’re walking the red carpet and you can bet they’ve been avoiding any and all salty foods and agonizing over their skin and hair and gown and shoes. For months now (or, at least, since the nominees were announced) they’ve been getting ready for this night, working hard to make everything perfect.
And then the fashion police will come along and tear them apart. Those shoes! That dress! What was she thinking?
I hate the fashion police. They’re mean. And petty. And cruel. And what I really want to know is, who gave Kelly Osbourne a badge? Does she have the authority to arrest herself? Why isn’t she exercising it?
Having Kelly Osbourne as a style critic is like having William Hung as a judge on American Idol.
My take on all the carpet walkers is, if they made the effort to show respect for the event, they look great. What they’re wearing and who they’re wearing is not the reason they’re walking.
Now back to my Cajun trail mix.
Posted by Wendelin Van Draanen at 7:58 PM 13 comments:

I remember receiving a letter somewhere in the early stages of the Sammy Keyes series where Nancy (my editor) sent a cover letter with a marked-up manuscript that mentioned somewhere in it that, yes, she was asking me to work on three Sammys at once.

It's been a long time since that first time, but I find myself, once again, needing to work on three Sammys at once.

Of course I can't physically work on all three at once. I have to tackle them one at a time. So, going by deadline, I've been up to my eyebrows in reviewing Justice Jack. In theory it should be easy because I could jump from one copy editor comment to the next and simply address the specific notes without reading the entire story.

Which is too bad because I drive each and every one of them crazy.

Well, there was the one who read Runaway and made wonderful comments in the margins, but that's unheard of.

(Except that you just heard of it. Right.)

Anyway, mostly copy editors pay attention to the nitty-gritty details of punctuation, style, consistency, and grammar. Well, they try to reign in the grammar, but dangling prepositions abound regardless. They also sometimes make comments about dogs that make you realize they have cats.

But never mind about that.

By and large they stick to the facts, ma'am, and the fact is that Sammy Keyes books break a really big rule of writing--they flex back and forth between present and past tense, sometimes within the same paragraph.

But you know what? Speech is fluid. When people (especially kids) talk, they move from past to present all the time. So if I'm going to capture the voice of a 13 year old, I have to break the rules. At least I choose to break the rules to portray an authentic voice. Sammy Keyes is, after all, a rule breaker.

So fifteen books into the series and I am, once again, feeling very sorry for yet another copy editor who is trying to edit by the rules. Past or present tense?  Which is it? What am I supposed to do with this? You can't switch like this! It's against the rules!!!

Poor dears. I know they're pained by the struggle to figure out how to professionally deal with this doggone rule breaker who must not know even the basics of writing.

Nancy sees the manuscripts first, and winds up crossing out all of the copy editor's tense notations (which are often done in red). And then I get the bloodied manuscript with a note from Nancy saying something like, Not as bad as it looks! The CE notated tense.

So I'm rereading the whole of Justice Jack and, tense notations aside, it's a good thing I didn't just jump from mark up to mark up because I found (what I consider to be) a pretty big mistake (which I can't believe nobody else caught!) -- I had previously edited out something on one page, but the reference to what was now gone still existed two pages later.

So even though it was "optional" for me to review the "2nd pass galleys" (I'm sure Nancy just didn't want me to see another 300 pages of bloodied verbs) I'm glad I'm going over it, and going over the whole thing. Again!

Next week I'll tell you about Sin City, and then #17. And one of these weeks I am going to do a Justice Jack ARC giveaway, so I hope you'll check back for that. Meanwhile, break some rules. Or at least a tense situation! 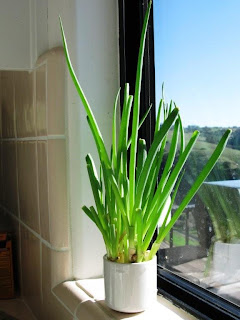 I've been distracted by onions. The green ones. The ones I buy at the store in bundles of eight or twelve, then slice and put in salad or tuna or scrambled eggs or soup or...well, you know--anything on the salt side of the culinary aisle.

Sometimes the store trims off the roots of their green onions.

I don't buy those.I buy the kind with a good stub of white left at the base, because I have a little planter box on my deck where I replant the onion ends. They grow back quite easily--all you have to do is remember to water them. It's not that replanting green onions saves you bunches of money, but it's nice to have fresh onion sprigs anytime you're in the mood for say, salad or tuna or scrambled eggs or soup.

Lately it's been blustery and, okay, I admit it--I'm a wind wimp. I also don't like it cold. Rain's okay. So's fog. Sunshine is wonderful. But wind? It makes me nervous. We're on the side of a canyon so it comes whipping through, upending all the deck furniture, flinging cushions overboard, and if we haven't taken down the umbrellas?

Even Mary Poppins couldn't handle it.

So wind is wicked, and if it's a cold wind? Brrr. I'm plugging my ears and hiding in the back corner of the house where I can't hear furniture scraping and cushions flinging and green onions flapping around for help.

Because of the weather, I started putting my last bunch of green onion stumps in a little two-inch espresso cup. I don't make espresso, but the tiny cups get used for all sorts of odd things. Like holding onion stubs until the wind and cold let up so I can go out to the planter box and plug them in the dirt.

I've done this lots of times before--I just put a little water in the bottom to keep the roots from shriveling up, and they've always held on just fine. This time, however, I wound up adding all the stumps to the cup. It's been that windy. And each time I'd add new stumps, I'd rinse the roots of all of them and add clean water. And although I've had the stumps start to shoot up in the past, I've always transferred them to the soil soon after they started sprouting. I've never grown a whole bunch before, but having so many in the tiny cup seemed to actually work better than just having a few. The stumps were held upright, supported by each other. It's worked so well, in fact, that I've been harvesting from these guys for weeks now! I rinse the roots and give fresh water every other day (or so), then pop the bunch back in the cup, put it on my windowsill and delight in how they continue to spring forth.

While I was doing the dishes last night it occurred to me that those green onions on my sill are pretty representative of life. We don't need as much as we think we need. With some decent roots, a little support, some water, and some sunshine,watch us grow and produce. Even when we're cut down, with a little time and nurturing we'll spring right back.

So, yes,  I've been distracted by onions.

Onions that make me want to thank you for the water and sunshine you bring to my life.
Posted by Wendelin Van Draanen at 11:28 AM 9 comments:

I Did My Homework!

Thanks to everyone who gave feedback on the post from two weeks ago. Lots of good discussion and suggestions and input!

So what did I do with it?

First I printed out all the comments, highlighted the important data and made a spreadsheet with a column for each actor. Then I looked each actor up on imdb.com and decided whether they were a real possibility or not. Mostly this decision was based on the actor's age. I didn't eliminate anyone because they didn't match the picture in my mind. After all, if my picture doesn't match your picture, that's most likely due to my lack of description, not your lack of detection. (As a rule, I dislike reading overly descriptive portrayals of characters, so, as a rule, I avoid doing that in my books, which can lead to under-describing, which can lead to different mental pictures.)

The one character I must have under-described is Marissa. I see her as having long curly (or, at least, fluffy and full) dark hair. Her mother's name is Yolanda, and I see Marissa as being at least part Hispanic... although I've never mentioned this overtly in the book.

About actor age: Unfortunately, in this case it really matters. If it takes, say two years to get to the "and...action!" part of this process, someone who may seem a tad old to play a character now will be way too old in two years--especially for a series. If there's a strike-through one of the names, that's why.

I embedded a link for each character, then realized I should probably transfer everything into a Word doc, so I did that, then imported pictures and birth dates for each actor to coincide with the linked list of names.

Then I divided the cast into generations (because I've been told that this is one of the appeals of the project), removed Holly and Dot in an effort to limit the 'kids' to one page. (Don't worry--they're not gone. They're just not represented at this preliminary phase.)  Then I put a * next to the actors I liked best. The image posted is actually the reduction of what took up three sheets of paper.

This was actually a whole lot of work, but I wanted a concise, visual representation of your input, and I wanted it to give an easy snapshot of a potential cast. My agent said it was "inspired" to ask for your input, and the producer got back to me right away with a "This is great!"

So I want you to know that the time and thought you put into this is appreciated and your input has been passed along. (And for those of you who did late-week comments, I will check those out, too!)

Glad you're out there--have a good week!
Posted by Wendelin Van Draanen at 5:02 PM 24 comments: