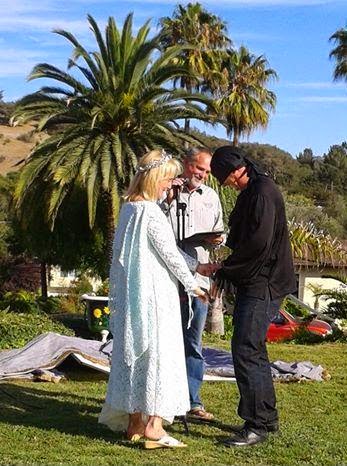 We attended the wedding of a couple of friends this weekend. It was an outdoor ceremony on a storybook perfect day.

The bride wore a summer dress, the groom, a white shirt and jeans. Per dress code guidelines, lots of guests wore shorts and flip flops.

The soon-to-be-wed couple mingled and attended to details, and when the ceremony was underway, they walked across the lawn together toward the "altar" .

The altar was a puzzling structure. It seemed a little...awkward, and I though it was a tall stack of hay bales covered by a shiny fringed cloth...until it blew over.

Definitely not hay bales, but...what was it?

Why was it even there?

No matter. The structure was re-erected and the bride and groom approached the altar, where the minister was waiting.

The minister began with a traditional opening, but when he got to the word marriage, we all shook out an ear because we'd distinctly heard, "maawidge."

Then the groom interrupted the barely-begun ceremony, and both he and his bride-to-be skedaddled behind that altar-contraption-not-hay-bales-thingee. After a few minutes of assorted undergarments flying into the air, the two reappeared in Princess Bride attire--she as Buttercup, he as the Dread Pirate Roberts.

All of us burst into whoops and clapter (=happy clapping). They didn't have to announce what characters they were--we knew immediately. And with that change of costume came a fully formed sense of surviving obstacles and misdirection and Fire Swamps and Rodents of Unusual Size to get to each other.

It struck me how neat it is--and powerful--that fictional characters can have such a strong and bonding impact on our real lives. How something as simple as a costume change can bring with it such a flood of understanding and happiness and romance.

And may our friends live happily ever after.

It was quite a weekend with the film guys, who flew in from Seattle to get footage for the documentary they're doing about Sammy Keyes and (more broadly) why books we read in our tween and teen years matter.

At first I didn't really get why they wanted to go to "Santa Martina" -- it's a fictional place, despite being inspired by a real city. I tried to explain that the Heavenly Hotel in the Sammy Keyes books doesn't look anything like the hotel it was inspired by. Nor does the Senior Highrise. Or the police station. Or any of the places Sammy frequents. I was sure the Docu-Dudes would be very disappointed.

But I was reminded this weekend that, just as characters we develop often spring from people we have crossed paths with in real life, so does setting. And setting can be very much like a character. It gives life to your story, and gives character to it as well. It doesn't have to be true to it's inspiration. It just has to help you create your story.

After I saw the crew was actually excited about the places I took them I began to relax about it. And in a funny way, it felt like we were Sammy and Friends, cruising the streets of Santa Martina, even hiding in the bushes.

So Sammy's world is "captured" now, as the Docu-Dudes like to say. And it was very interesting for me to get a new perspective on the old inspirations. It was also a little mind boggling to look around and realize that these ordinary locations are now familiar to readers around the world--something I never imagined when I wrote Hotel Thief.

The documentary will be about Sammy, but in a broader sense, it will also explore wider themes--about the importance of books and reading, about world-building and shaping your own world, about beginnings and endings (happy and otherwise). The team asked me some great questions and also interviewed a journalist who has covered my career for the past 14 years. They tell me he had a lot of really great things to say, which I'm curious to eventually see. And after witnessing the artistry of the videographer, I am starting to get the picture--these guys aren't messing around. I'm also starting to believe--this is going to be awesome!

The film will debut at the Sammy Keyes party on October 4th, and then their plan is to do the indie film circuit with it, submitting it as a "short". After that it'll probably be available online. You know you'll be the first ones to know!

One last little thought. While we were standing across the street from the "Heavenly" taking in how the hotel had been ruined by a fire, it hit me that Sammy had said in Hotel Thief that if she ever saw a fireball across the way, she'd know that Madame Nashira's cigarette and finally made contact with her hair (shellacked to unnatural heights, as is her style).

It gave me pause. And in a world gone meta, I can't help thinking that's exactly what happened.
Posted by Wendelin Van Draanen at 9:15 PM 3 comments: 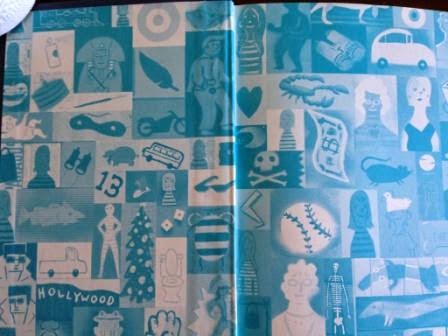 I just received a finished copy of Sammy Keyes and the Kiss Goodbye in the mail and was very happily surprised to open it and find custom endpapers! I am attaching a snapshot of them, but they are way better in person, and there's more on the backside of the turning page. It's hard to believe the book will be in stores in three weeks (and two days, but who's counting, right?).

Meanwhile, the Sammy Keyes documentary guys are going to be here next weekend. It's almost certain that I'll have a bad hair day, but I'd trade that for a good-word day in a heartbeat. I have complicated thoughts about Sammy. I hope I don't come off sounding stupid or crazy. I'd much prefer others to talk about the importance of the series, but there's no backing out now.

And the birthday "tiaras' for the Sammy Keyes Party have arrived, so if you're coming to the party for your birthday, let us know--we will make a fuss over you!

That's all for now. I should have lots to share next Sunday after the Docu-Dudes leave. As always, thanks for checking in. See you in the comments!
Posted by Wendelin Van Draanen at 2:31 PM 7 comments: 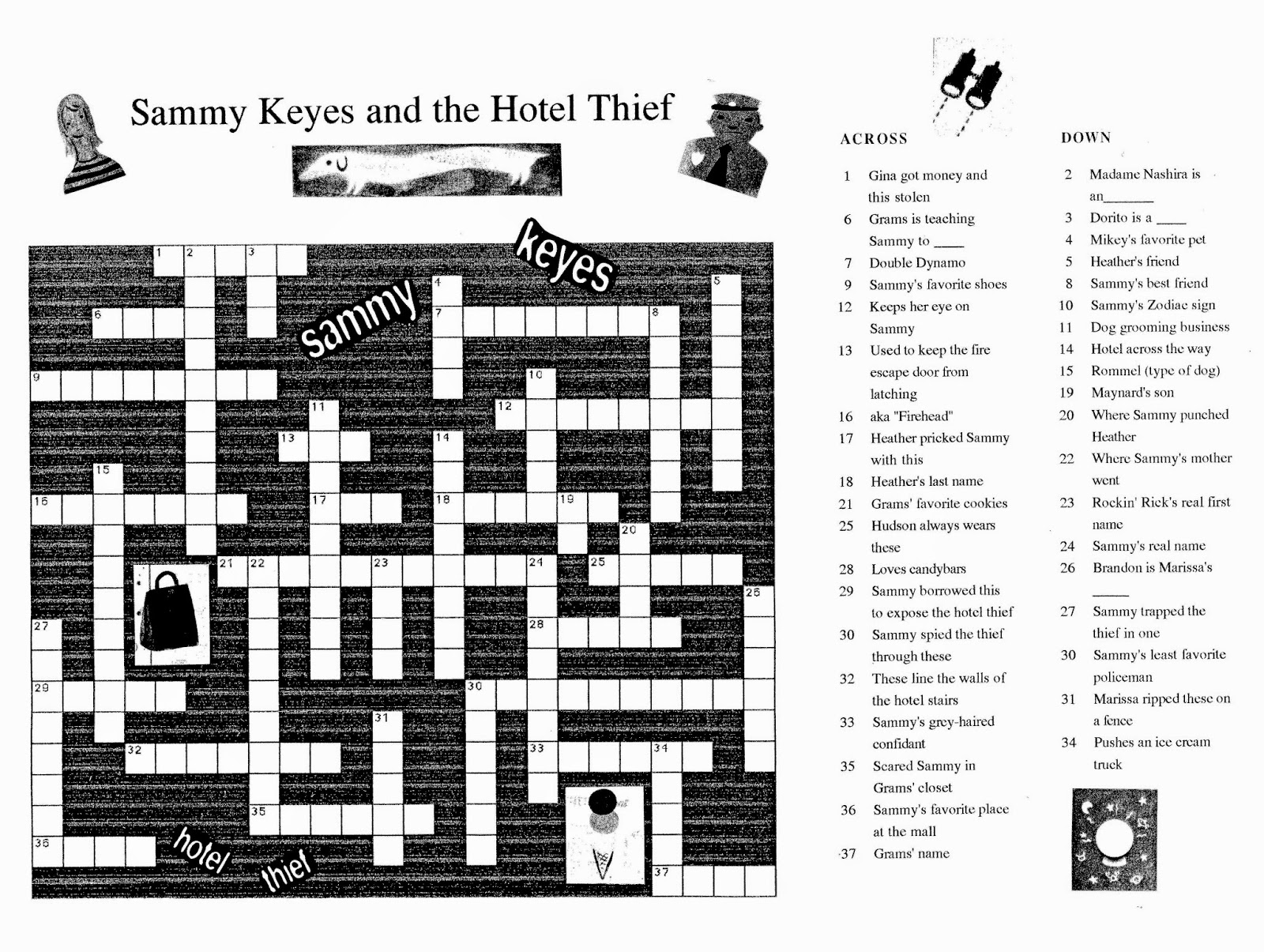 Sorry it's not one of those cool, interactive crossword puzzles. The process is print, apply pencil.

But finding the puzzle got me thinking...

On the Southern loop of the tour we participated in the Alabama Book Festival, and my favorite thing about the event was this enormous crossword puzzle they had on the grounds. Anyone could go up and marker in an answer, and people milled around it all day. 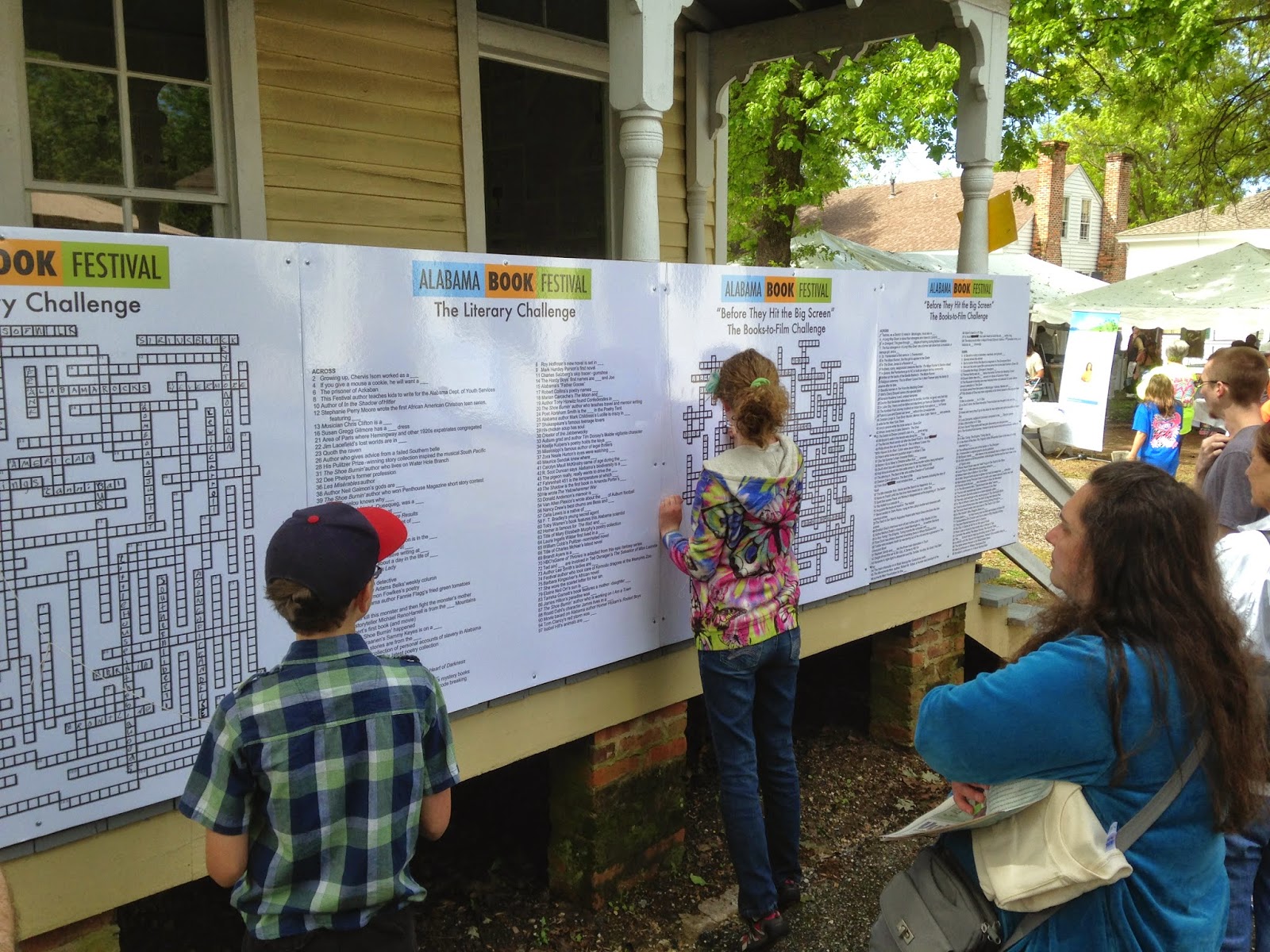 (It didn't hurt our enjoyment quotient that our book titles were part of the puzzle.)

Anyway, I hit on the idea that it would be fun to do something similar for the Sammy Keyes Party, so I spent a lot of time today trying to figure out how to make that happen.

It won't be as "installed" or as big as the ABF puzzle, but my plan is to have three sections, each with clues from groups of six Sammy Keyes books. So the first one would be Hotel Thief through Hollywood Mummy, etc. I think it'll be a super fun thing for people to do in between other stuff that'll be going on.

And for those of you who are not on Facebook, we posted a fun little snippet of our SK Party band practice the other day. It's just us goofing around, and there's no bass, so don't expect it to be anything other than goofy. And, yes, this gives away one song. It was impossible to guess, I know, but to me it's "so Sammy!" (Burning Down the House, by Talking Heads.) Thank you for all the great song input last week--I loved seeing your choices.

All for now! Have fun with the puzzle, and thanks again for checking in!
Posted by Wendelin Van Draanen at 8:04 PM 4 comments: 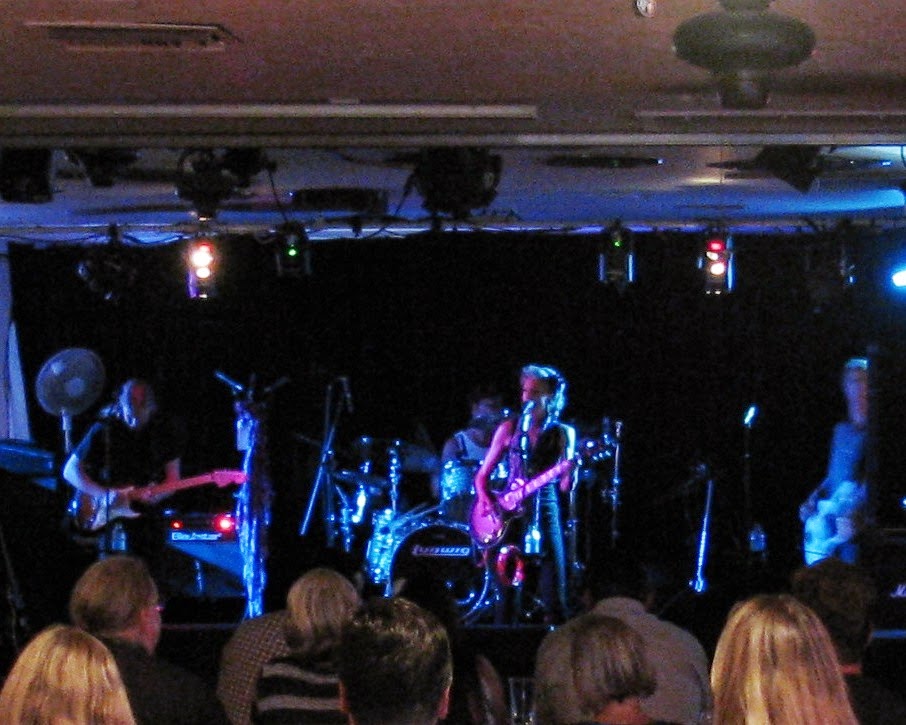 The 'we' is the family rock band. Which (for those of you who are uninitiated) sounds epically dorky, I know.

And we'll be playing a few songs at the Sammy Keyes Party on October 4th. (There'll be a house band that night and they'll lend us their gear which is epically nice, as any musician will tell you.)

Some of the songs will have Sammy-fied lyrics, and all are dedicated to certain characters.

Hmmm...actually...it would be fun to have you guess the songs. Although there are probably hundreds of songs that would apply. And probably no one'll guess the ones we're doing. But still, it would be fun to put it out there for your guesses, if you want to play along!

To narrow things down, we are a rock band. Not much bubblegum pop happening here.

So pick a song you think fits...

1) Marissa + Danny (as in her not being able to break away from him)
2) Sammy! (as an everyday girl stirring up trouble!)
3) Lucky Me to Sammiacs
4) Heather's Explanation (you will never get this!)

We'll also be doing Beatles' Birthday for the people who are coming for their birthday (so you need to let us know if that includes you), and the revamped (and greatly improved) Sammy Keyes song (full version+conga line dance break!).

So why aren't you coming to this party?

Oh, I know. Distance. Cost. Time. I do understand!

But play along and guess some songs. It'll be fun to see what matches you make!