I wanted to give my regular readers a little heads-up about next Sunday's post :

Instead of my usual newsy or personal post, there'll be instructions for a Random House sponsored contest for winning autographed copies of Sammy Keyes and the Killer Cruise via Twitter. I know some of you aren't on Twitter, but maybe you have a friend or parent who is so you can enter?

Just wanted to let you know!

Hoping you're having a good week,
Wendelin
Posted by Wendelin Van Draanen at 2:04 PM 8 comments:

Today we fulfilled my mother's wish of having her and my dad's ashes scattered in the High Sierra. These were the mountains where our family often backpacked; where we kids learned survival skills, the merits of packing light, and an appreciation of nature.

Mom would always stop and examine flowers on these treks--she had a real love of wildflowers, even the small, plain ones that the rest of us easily overlooked.

She also was intrigued by rocks. Any family vacation we took, she came home with rocks. (Her license plate was an abbreviation of Rock Gatherer, which sort of sums things up.)

After Dad died, Mom took to traveling to distant lands and (in keeping with her quirky sense of humor) packed along rocks from one end of the earth to deposit on another. She relished the thought of "confusing archaeologists of the future" with her naughty rock shuffling. Which is why it was fitting that on this trek up the mountain we carried along rocks from her collection, and packets of wildflower seeds. 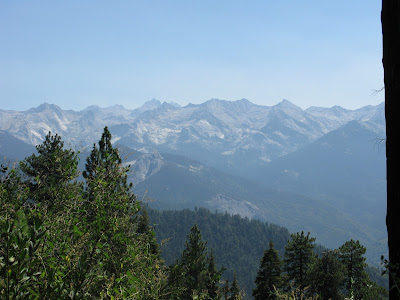 Dad's ashes have been waiting in a closet for 35 years, Mom's for only a couple of months. They're mixed together now, high in the Sierra, overlooking a stunning mountain range and valley, and the Cliffs of Valhalla (a word my sister tells me is a Norse or Germanic word for heaven). And scattered among our parents' ashes are Mom's rocks and the flower seeds we hiked in, sprinkled with some tears of their daughters.

My sister and I were there with our own families, and after the ashes were scattered, everybody took a turn clanging the metal triangle our dad made to call us home when we were kids. (I can't believe my sister backpacked it all the way up to the scattering site, but she's quite a hiker.)

For all the difficult "last set of switchbacks" my mom and dad coaxed me through over the years, this was a trek steeped in only love and gratitude; a long walk where I spent time appreciating all they did for me, and all they taught me.

It was an honor to make this journey for them.

An honor to take that final hike home.


Posted by Wendelin Van Draanen at 1:32 AM 6 comments:

I'm terrible at asking for favors. I like doing favors for other people, and I enjoy it when someone does something nice for me, but asking them to do something for me? It gives me the willies.

What got me over the Favor-Asking Threshold was wanting to do a favor for somebody else. See, Mark has a good friend (Dan) who loves the LA Dodgers. I think it's fair to say that the root of this extreme Dodger love is not the team itself. The players may be fan-worthy, but they come and go.

It's also not the City of Los Angeles. Or the contagious Dodger love effused by one-time player and longtime manager Tommy Lasorda (who, quite famously, says he bleeds Dodger blue). No, Dan's love for the Dodgers is rooted in the voice of the Dodgers--Vin Scully--the man who's been doing play-by-play coverage of Dodger ballgames for 64 seasons.

I do understand the love of Vin's voice. Growing up in a suburb of Los Angeles, it was the summertime soundtrack for our neighborhood. Our neighbors, the Myers, were huge into baseball and hearing Vin's voice reminds me of slip-'n'-slides and hot dogs and ballgames in the street.

But for Dan, Vin's voice was more than that. It was a constant in his life--a familiar voice full of storytelling and picture-painting and comfort.Talk about bleeding blue, Dan has never not listened to Dodger baseball.

Now, I have a friend who works for the Dodger organization. She is also an incredible puppeteer ("Feed me, Seymore!") and a scriptwriter. I met her during the book-to-movie process for Flipped, so I haven't known her all that long, but she's someone I recognized immediately as being sincere, astute, and forthright. It didn't take long to also see that she had a great big heart, and that she was someone I wanted as a friend.

Which is the very worst kind of person to ask a favor of.

I mean, it's just wrong to impose on a new friendship or someone's big-heartedness!

But Dan's girlfriend (learning of my Dodger connection) took me aside and asked about the possibility of getting something signed to Dan by Vin for his birthday. And knowing how much it would mean to Dan to have something signed to him by Vin, I approached the Favor-Asking Threshold and knocked.

My friend was receptive and after over a month of plotting and juggling the logistics of an epic birthday surprise, Mark & I traveled to Dodger Stadium with Dan and his girlfriend, and Dan got to shake hands with Vin and tell him what he meant to him.

I've got to say that Vin Scully is a classy guy. He looks you in the eye. He listens. And he's funny, too. When Dan told him about falling to sleep to his voice as a kid, Vin quipped, "Yes, I'm afraid I've put a lot of people to sleep over the years."

So Dan met his idol, and he did get a signed baseball. (Mark had one tucked away in his cargo shorts and when we asked Vin if he would mind autographing it for Dan, he graciously agreed. It was only afterwards that my friend told me that their contract specifically states that they cannot ask for autographs).

As if that wasn't enough, Dan also got to meet (and get pictures with) Tommy Lasorda, and Fernando Valenzuela (a star pitcher for the Dodgers in the '80's) and Nancy Bea, the Dodger's organist since the late 1980's.

All before the game!

And then...what a game! The Dodgers (who were down from the get-go) came back to beat the Mets in the bottom of the 12th inning. It was certainly a magical night at (what Vin has dubbed) the Magic Castle.

Mark and I got to meet Vin, too, and I brought him my most sports-based book as a gift. And although he probably gets all sorts of stuff from people he doesn't know, I brought it for him anyway because I wanted to give a piece of me as a token of gratitude, instead of asking for a piece of him.

Our friend told us afterwards that she had never arranged a meeting with the sportscaster before. And I could tell she was anxious about it--that she was going way out on a limb to make this happen. But she was super happy that it all worked out, and I was over-the-moon happy that I'd helped facilitate a dream-come-true moment for Dan.

And now, despite the excellent outcome, I have stepped away from the Threshold.

You won't find me near it again for a long, long time.
Posted by Wendelin Van Draanen at 6:01 PM 10 comments: 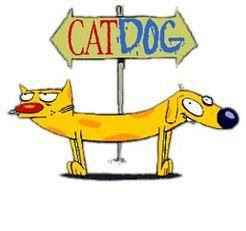 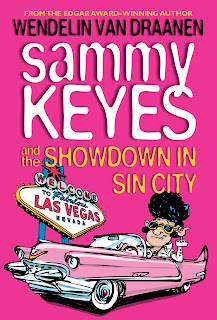 I've really enjoyed the reaction to last week's Epic Road Trip idea. Thanks to everyone who's sent in e-mails and/or comments. I've got a file going now and the idea's moved from Wouldn't-That-Be-Cool to Okay-Let's-Really-Do-This! We won't be highway bound for over a year (which seems like forever, I know), but it'll take that long to piece it all together and do it right. And it'll be fun to share the prep news with you as things shape up.

Meanwhile, in only two days Elvis is rolling out on the paperback of Sammy Keyes and the Showdown in Sin City. So if you've been waiting for the paperback to release, the time is now! (I just love this cover, done by illustrator Karl Edwards. It's pink, but somehow that's okay for this book!) 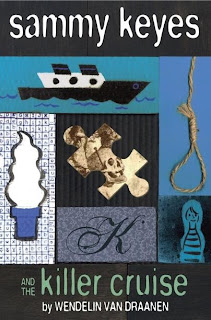 And Sammy Keyes and the Killer Cruise will be out on September 10, which is right around the ol' calendarical corner. (Sorry.) It's my homage to the mystery genre and contains nods to classic mystery writers (and their characters), and it's my take on a locked-room mystery, with coded clues (a first for Sammy), disguises (definitely not a first!), and (of course) red herrings!

And there's also Sammy & her dad stuck together on a "boat."

Finally (not to mention finally), I've turned in Sammy Keyes and the Kiss Goodbye--revised and ready to read by someone besides me (and Mark, of course). I'm sure when Nancy's done with it there'll be stuff to add (and probably subtract), but it's feeling pretty good. Like I wrapped up things y'all asked me to wrap up. Well, mostly. I found I also opened some new cans, but you didn't want it too tidy, right?

Anyway, thanks for checking in. If you haven't already weighed in on the Epic Road Trip, don't be shy. Suggest away via e-mail or in the comments.

See you next week!