Behind the Flipped Iridescent Edition 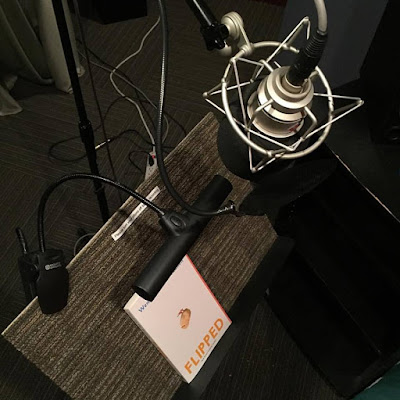 There's a new, anniversary edition of Flipped. It looks much like the original, but has an "iridescent" cover. Those of you who have read the book will know that this change was inspired by a passage in the book where Bryce Loski's grandfather tries to explain to Bryce why Juli Baker is special:

"Some of us get dipped in flat, some in satin, some in gloss...but every once in a while you find someone who is iridescent, and when you do, nothing will ever compare."


Like the book itself, the cover change is subtle. There's a new edge of orange and the white is more beautiful eggshell than flashy iridescence. Nancy (my editor) told me that it suits the book--that the more time you spend time with it, the more you see and appreciate its beauty. 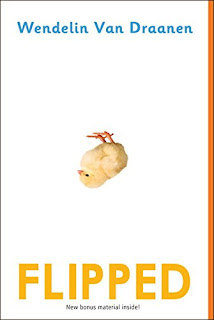 This new edition is not just a random repackage. It comes after fifteen years of fan mail demanding a sequel, and after the adaptation of the book to film. There have been a lot of questions over the fifteen years, and the new edition contains an additional 30+ pages where I answer, share, and explain. If you're someone who's been curious about the status of a sequel, or what it was like to ask the Flipped movie director--the revered Rob Reiner--to not stick to the ending of the book, or if you want your heart to swell from the profound words of a fan in China and know what it means to "hold a mighty heart," you will delight in the bonus pages.


Along with the anniversary edition of the book, there will be a new audio book, produced by Listening Library with voice actors Ryan Gesell doing Bryce's pages, and Tara Sands doing Juli's. Listening Library asked me if I'd be willing to lend my voice to the new bonus pages, since they're written first person--me talking to my readers.


So this week I made the trek to the Listening Library studios in Los Angeles and did my first "voice work." It was interesting and almost fun, but I found myself getting choked up--something that doesn't make for good recording!

What this says, though, is that these pages are personal. They hold little stories that I had never intended to share. Little bits of my life that shaped me, that shaped Flipped. Typing them for the book was one thing, but speaking them? Even alone, inside the darkened room of a vocal booth, saying the words aloud was emotional in a way I find impossible to explain. 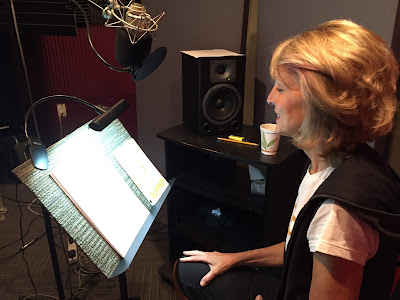 The truth is, that's the same with me for Flipped itself. Don't ask me to read passages aloud. I just can't do it. Maybe fifteen years from now I'll be able to spend time in Bryce and Juli's world and not tear up.

Somehow, I doubt it.

Until then, may you appreciate nature and your neighbor, may the rising sun send streaks of fire through the clouds around you, and, most of all, may you find a love that is iridescent. 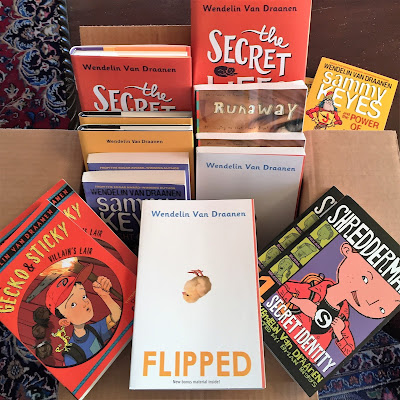 It's November, the month where we find ourselves reflecting on things for which we're thankful.


Don't worry, I'm not going to hit you with my list.

Instead, I'm doing a giveaway for teachers / librarians (or educators of any kind). It'll be a box of books with duplicates of assorted (signed) titles, some paperback, some hardcover--whatever I can cram inside the box. The idea is that the winner keeps one copy of each title for their classroom or library, and gives the duplicate titles away to students at their school. Get one, give one.

Isn't that an awesome idea?

Well, not if you're not a teacher or librarian, right? But how about this--you know one of those don't you? You may see one every day! So tell them about giveaway, with the understanding that you get to keep one of the books if they win.

The November giveaway is happening on Twitter (where you can find me at @WendelinVanD), and I will do a Book Bouquet Giveaway each week through the end of the month (4 boxes).

Please note: The random-draw winner's mailing address must be that of a school or library.

I know some of my regular blog readers don't do the social media thing, so to you guys, don't dismay! I promise to also do some sort of giveaway here at the blog in December.

Meanwhile, tell the teachers you know to join the fun here.