The person behind this is also the person coordinating the Sammy Keyes party on October 4th in Washington state, where the documentary will premiere. This is his vision and since he has a doctorate in children's literature and has been enthused about Sammy since Hotel Thief came out in 1998, I think it's okay to trust him with explaining what regular readers here already know--Sammy Keyes matters!

Anyway, there'll be a little docu-team coming here in mid-August to get a bunch of footage, and in preparation for that Mark and I ventured into "Santa Martina" to get some possible inspiration-location photographs.

Is there a Senior Highrise?

A swoopy sidewalk around the mall?

Or the basement in Snake Eyes?

What about the graveyard...is it as described in Night of Skulls?

Well, yes and no.

After our picture taking tour, what struck me most was how an author's imagination fills in space and creates a renovation of reality. Something sparks an image in the writer's mind, and then it builds from there. And when you revisit the original inspiration you find  it's been dwarfed by the picture you've built around it.

The Heavenly Hotel, for example, was based on an old rundown hotel that had some faded pink trim. From that came the HEAVENLY with its pink neon sign and mirrored stairwells.

The point of the documentary is not primarily to document the places Sammy's world was fictionalized from, but rather to explore the contribution of the series. Genre fiction is often marginalized, and Sammy Keyes is considered genre fiction. A mystery series. And really, what can a mystery series contribute besides entertainment?

Recognition for the substance of Sammy Keyes has felt like a battle over the years. "Mystery series" seemed just too big a barrier for people in literature circles to see beyond.

Maybe it's because we've come to the end of the series that it can now be assessed as a whole body of work, not just "the next Sammy Keyes". Maybe this is an unexpected benefit of having reached the heart-wrenching end. I'm just grateful that someone has taken the lead on putting into words--and on film--why Sammy Keyes matters.

Because you know what? She does.

As always, thanks for checking in. Looking forward to seeing you in the comments! 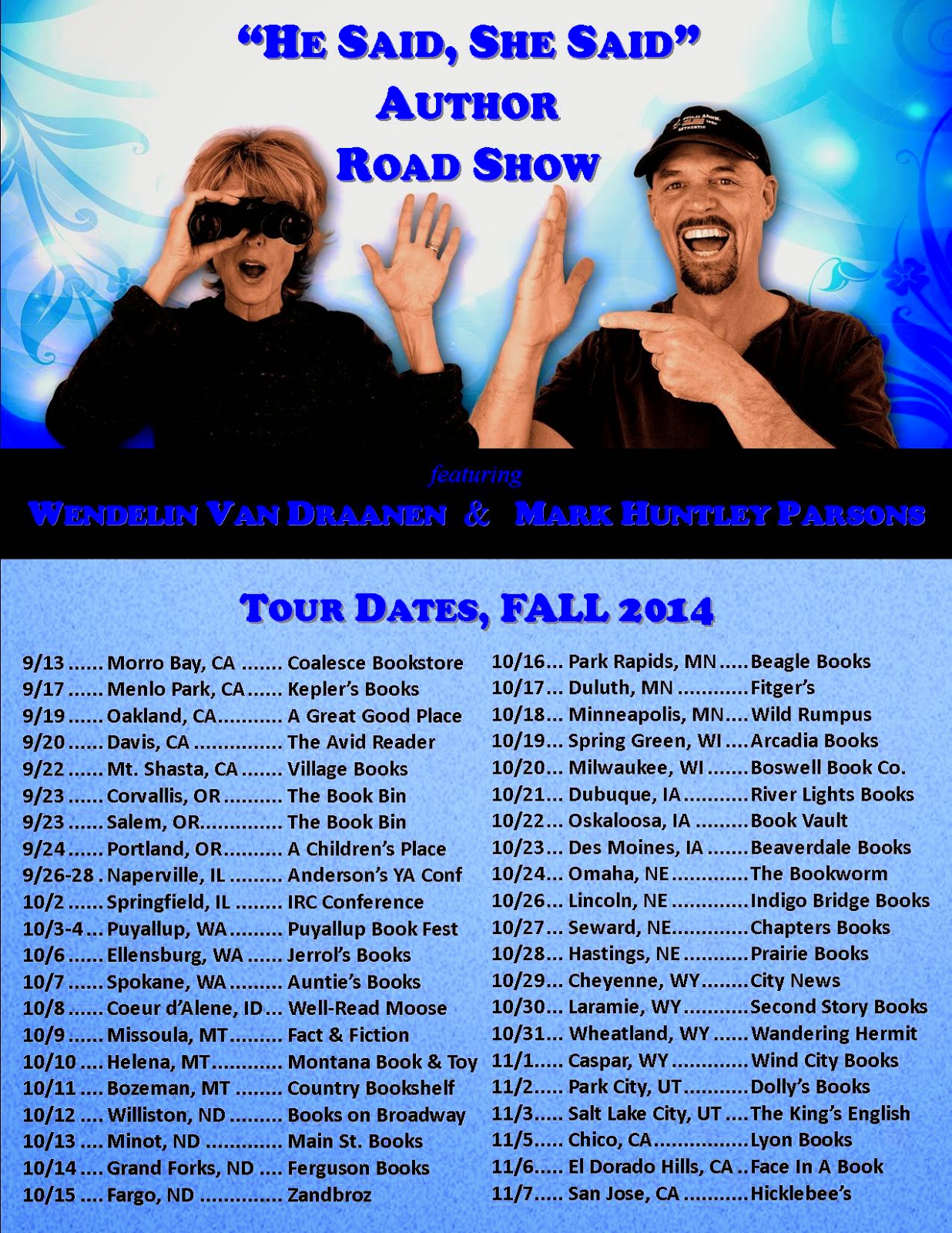 After months of planning we have northern loop Road Show dates ready to share! So if you're in...

...check the roster for a stop near you!

I want you to know that we did everything we could to get to the places people requested (and some of those were definite sidetracks from logical routing, but in the tradition of this "Goodbye" for Sammy Keyes, that seemed more than appropriate).


On the roster you'll notice the Puyallup Book Festival. This Festival has two exciting days planned.

The first one (Friday, 10/3) is billed as "An Evening of Teens, Books, and Rock 'n' Roll." Mark will be one of the featured YA authors, and it looks to be an awesome event with Santana drumming legend Michael Shrieve.

The second night (Saturday, 10/4) is the Goodbye Party for Sammy Keyes (aka Sammy-con!), and the plans for the night keep getting better and better! I will post about it separately, soon!

For now I'm going to leave you with our "War Room Map" which has been taped to the wall of our office since we started planning the first loop almost a year ago. (Green squares were the Southern Loop, orange is the upcoming Northern Loop.) I've really come to love this map. Our son pointed out that the roads look like arteries and veins and capillaries, and they give it the feel of being alive. Creepy, maybe, but I think it's cool. 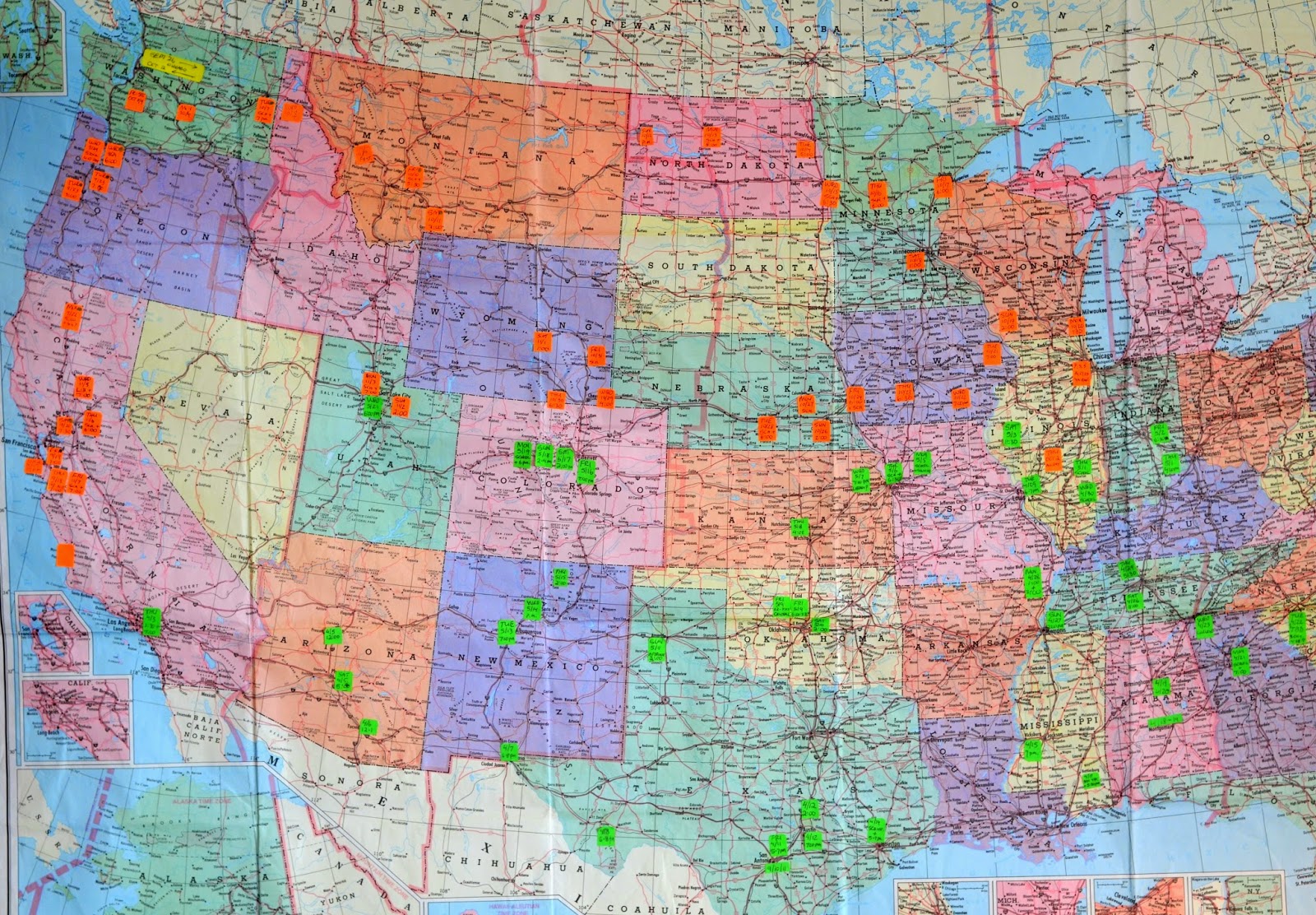 Putting together this tour was tons of work, but now that we have our stops, dates, and finalized route, I'm excited for September, and especially excited to find out...who's coming to see us?

This has been my battle cry lately: “Howler!”

(Oh, by the way, this is Mark.  Wendelin’s a little under the weather and has hit the hay early.)

And the reason this has been my battle cry lately is, well… a long-ish story.  But I’ll try to keep it short-ish.  (For those who know me, you can stop laughing anytime now…)

See, Wendelin’s been working on a new book.  (Shh… it’s top secret.  So secret that I can’t even mention the name.  But I have to say that I’m totally LOVING this book – it’s so awesome in so many ways!)  And a very small part of the book involves a little story-within-a-story (written by a young boy) that features a guy who has a pet wolf named Howler.  (Of course.  Like, what would YOU name your pet wolf???)  Actually, Howler is more than just a pet - he’s closer a companion, a furry sidekick, a partner in anti-crime.  And even though he really only makes a brief appearance, I was so taken by him that I started referring to the book itself as simply “Howler”, which is shorter than the actual title.

(I do that.  Make up short nicknames for things vs. using a better/longer descriptor, I mean.  Including – but certainly not limited to - clothing ensembles.  Like, uh… my favorite uber-casual outfit is a pair of red running shorts, a white tank-top, and a red ball cap.  Otherwise known as ‘The Lifeguard’.  And then there’s ‘The Zookeeper’, ‘The Joe Perry’, and ‘The Old Gray Mare’.  Among many others.  It’s undoubtedly the influence of Sammy on me…)

And now ‘Howler’ has morphed such that it not only refers to the book itself, but to the very act of writing the book.  So when I notice that Wendelin is kind of just… let’s say… not doing anything terribly important at the moment (as judged by a Howler super-fan, that is), I just walk by and quietly say (in the world’s loudest stage whisper), “Howler!”  Which is my way of saying, “I love this freakin book and I want you to work on it so that I can read another chapter of it, not soon, but right-darn-now!”)

See, I’m a big believer in the idea that you should do what you can to honestly support the creative endeavors of those close to you, and to me there’s nothing like having someone actively waiting to read what you’re currently working on.  Doesn’t mean I’m a blind cheerleader – that’s not exactly the definition of ‘honest’, is it?  But if I honestly like something, there’s nothing wrong with – and everything right with – letting the person know that I’m really enjoying what they’re doing.

Creativity can be hard.  It can look easy from the outside, but on the inside, that’s YOU you’re putting out there, in that writing or painting or sculpture or song.  So don’t make it worse for the person laying it on the line by being too cool for school.  (You know what I mean – the dude who reads your story as though he’s getting paid to pontificate on every little thing he would have done different, or the girl who finishes your latest bloodletting-on-the-page and comments, “I found three typos.”)  You may not love everything (and while good constructive commentary is certainly a gift, it’s a learned skill - which is why we have professional editors), but when you do come across a work-in-progress that you genuinely enjoy, for God’s sake don’t be too cool to tell the person that you find their work good or great or valuable or stunning or clever or breathtaking or whatever descriptor best fits.  Trust me – they’re not too cool to benefit from the validation, especially if they can sense that’s it’s honest and heart-felt.

Which is why - if you walk by our place these days - you just might catch a glimpse of a lifeguard shouting, “Howler!”
Posted by Wendelin Van Draanen at 9:54 PM 4 comments: 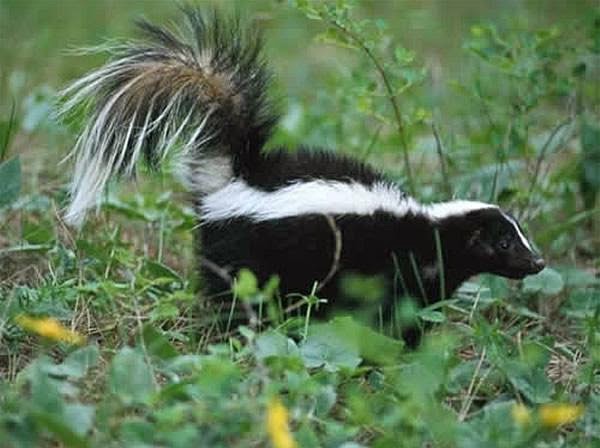 There's a skunk in our neighborhood.

It's a cute thing, really.

And I want to kill it.

It's like a toxic tanker, spraying fumes that blow in my window in the middle of the night; fumes that cloud my house with a smell so potent it burns my eyes. I can't stand being in  my own house. I run, gasping, for a deck, only to find that it's worse outside than inside. I slam the windows closed, dashing from room to room for refuge, sputtering and gagging,water streaming from my eyes while Mark miraculously continues to sleep.

At first Mark accused me of having an overactive imagination. He barely smelled a thing. Thought I was exaggerating. Couldn't understand what I was so worked up over. "Just go back to sleep," he groaned.

Sleep!? We're being fumigated! How can you sleep through this? WAKE UP!

Then it happened again.

People who visited us tried not to comment on the potent skunk smell of our house (as their eyes watered and they attempted to surreptitiously breathe through their sleeves).

Don't tell me about tomato juice. Or hydrogen peroxide and baking soda. The whole house is green with gas, and the smell doesn't air out. We run  a tornado of fans and air purifiers, and still, a month later the odor lingers.

I bought magic pellets, infused with fox urine. The ad claimed that sprinkling this foxy dust around the property would keep skunks from crossing the line.

Only you have to reapply it every couple of months.

And one canister doesn't cover much property.

And...how are they getting this fox urine, anyway?

I saw the beast coming down the driveway the evening of July 3rd. It was waving it's furry flag as it waddled straight for our house. "Mark!" I hollered. "Come quick!"

It was gone...and under the house...before Mark could reach me. And the question became, What do you want me to do about it?

"Kill it!" I cried, 'cause really, I am done thinking this skunk is any relation to Bambi's Flower. It is a devious, diabolical, trigger-happy fumigator!

But no, we did not kill the beast.

And to thank us the next day--the Fourth of July--its toxic fireworks went off again.

I have a friend who wants to get a pygmy goat. Being someone who lives in an area where pygmy goats (and chickens and other small farm animals) are allowed to roam, she knows a little something about skunks. She had advice for me about traps. And trapping. And skunks not being able to spray if their tails aren't up.

It calmed me down a lot. Finally, a solution that didn't involve fox urine or murder. I've now got a call into the county which will lend tormented citizens a trap. (It's a simple cage, from what I understand, that captures the animal with its tail down.) So I'm going to trap that beast, and the county will then pick it up and let it go out in the wild somewhere where it can live stinkily ever after.

And now that I've calmed down a little, I've had time to reflect on how all of this relates more broadly to the proper handling of pests that pollute your life. Not the fuzzy kind. The human kind. You can shut your windows and lock yourself away. You can retaliate or fire back. Or you can remove them from your life and let them be who they are...elsewhere.

It's made me realize that removal is the key.

No guilt, no anger, no fear.

####
As always, thanks for checking in! Here's hoping your week has open windows and fresh breezes!
Posted by Wendelin Van Draanen at 9:12 AM 6 comments: