A guy hurried past my table as I was signing stock for a bookstore event that had just finished.

(Whoa, I wrote that like I'm telling a joke. I'm not. This happened yesterday. Promise.)

He was on his way to the bathroom.

He was tall, and had dark, up-combed hair with a wide blonde streak. The fingernails on one hand were painted black. The others were not.

Interrupting his beeline toward the back of the store, he came skidding to a halt in front of my table.

Then he just stared at me.

"Are you...?" he asked, looking at all the evidence on the table. "OH MY GOD! You're the Sammy Keyes lady?"

"You came to my school when I was in FOURTH GRADE. I loved these books! And you sang a song....?"

Painted nails snapped as he tried to remember.

So I helped him out, "Sammy Keyes and the Sisters of Mercy..."

"YES! OH MY GOD! THAT SONG WAS STUCK IN MY HEAD FOR YEARS! I'm an ENGLISH MAJOR now!"

(He was not hard of hearing, he was just...excited.)

"I really gotta go," he said, obviously swimming. But as he started away, he said, "I CAN'T BELIEVE IT'S YOU! I'm an ENGLISH major now!" and as he disappeared across the store, I could hear him singing, "Sammy Keyes and the Sisters of Mercy..."

There are some moments in life I'll never forget.

This was one of them. 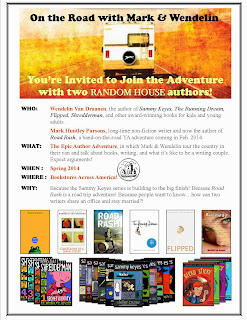 You should see our office. It's like a Rock 'n' Roll Road Trip war room. Only this time we'll be packing books and pens, not music gear.

Well, okay, maybe we'll bring along a cajon, so Mark has something to tap on besides my shoulder. Or the dash. (The tapping can get very annoying, as Sammy will attest.)

And maybe a guitar. So I have something to do when it's his turn behind the wheel as we drive across Texas.

(Have you ever truly considered how wide Texas is?)

So yes! This means the plan is coming together.We have independent bookstores in Arizona, New Mexico, Texas, Mississippi, Alabama, Georgia, Tennessee, Missouri, Kansas, Oklahoma, Arkansas, and Colorado who are onboard for the "southern half" of the states. (The "northern half" we'll do next Fall.) On our wall, there's a big ol' map with little pink and green dots all over it as the yesses come in and the plan starts shaping up. On my desk, there's a fat binder with correspondences, notes, and pictures, and a massive spreadsheet draped over a mound of smaller maps and bookstore lists. There's also my master list of notes from requests people from the blog have made. Highlighted! Scribbled on with stuff like, Work this in! and Must go!

(There's also a teacup somewhere in this mess.)

(And I could swear Mark brought me a cookie earlier.)

Anyway, yesterday I also had the wild idea that we need to have Nancy (my editor) join us for a few days on the road. Or a week, if she can stand it! Get out of NYC and into our van as we blaze across Mississippi! Yes, it's adventure time, city girl!

(I really need to stop having random conversations in the middle of my posts, sorry.)

If you want to be part of this and you haven't yet chimed in on a place (state, city, bookstore) you'd like us to visit, do so! If you have some wild (or, okay, even tame) idea you'd like to suggest, speak up! I'm really looking forward to meeting some of you in person. It's one of the reasons we're going as far east as, say, Georgia.

That's all for tonight! As always, thanks for checking in. See you in the comments!
Posted by Wendelin Van Draanen at 7:51 PM 38 comments:

We drove over 8 hours to get to a middle school that was supposed to be only 4.5 hours away.

That constipated beast, Los Angeles, was in our way.

It was dark (and late) when we finally rolled up to what the GPS told us was the location of our hotel room.

As fatigue would have it, it turned out not to be our hotel room. It was, instead some swanky villa estates. But we couldn't tell for sure that we weren't in the right place because...well, did I mention it was dark? And late? And that we'd been driving 9 hours?

I flagged down a security guard at the swanky villa estates and was given directions. They involved going out the way we'd come, turning right, and right, and right again.

No, we couldn't shortcut, or believe me, we would have pulled a Sammy Keyes.

After three rights we almost blasted past the hotel entrance because it was dark. And late. And we'd been driving for 10 hours. Did I mention that?

And in case you're wondering, the dark part is true. I don't know whether this desert town's residents are into the green aspect of starry night lighting, but the roadways were just...dim.

And, seeing how it was late and we'd been driving for 11 hours, I'm sure we were a bit dim ourselves.

The hotel room may not have been inside a swanky villa estate, but it still turned out to be way too much luxury for two weary travelers. Unfortunately, the restaurant was already closed.

Luckily, the PTO prez had left a gift bag for us

Which was a good thing because there's no way we wanted to venture out for dinner and we were famished. It was late. And dark. And we'd been traveling for 12 hours!

Sorry. My intention was not to go on and on for hours about the trip. The traveling to do school visits is always the hard part. And I shouldn't complain. At least Mark was with me this time!

No, my intention was to tell you about a freaky coincidence.

This middle school in the starry night desert booked me almost a year ago. They have Swear to Howdy as part of their core curriculum. I will just come out and say that I am an instant fan of any school that has STH as part of their curriculum. Not because it's my book specifically, but because of all my books it's the one that takes courage to adopt. It's meant to be a discussion book. It serves its purpose well, and in the process has been known to make a certain type of educator uncomfortable.

So knowing that this school loved and taught and discussed Swear to Howdy, made the 13 hour drive seem worthwhile. A frog stranglin' rain couldn't have kept me away.

In anticipation of my coming to visit, the school encouraged kids to also read Sammy Keyes and the Hotel Thief, or Flipped, or The Running Dream.

A lot of teachers read The Running Dream.

The freaky coincidence? Last week, the elementary school adjacent to this middle school was struck by tragedy. An elderly man hit the gas instead of the brake and rammed his car through the fence and into a metal box of some sort, causing metal parts to go flying onto the playground. One boy's leg was so badly injured by flying metal parts that doctors wound up amputating his leg below the knee. "It's the same leg as [TRD's main character] Jessica," the vice principal told me.

He also told me that in the one week between the accident and my arrival, the schools had already done bake sales and raised $12,000 dollars.

In a very odd way, it felt like my book had come to life. For the boy's sake I would erase every page if it meant what had happened to him could also be erased, but that's not possible, so the goal's got to be to get him, like Jessica, to a new starting line.

After my presentation--which contains slides of an amputee putting on his prosthetic leg--I asked the students to include the boy when he attends their middle school next year, and I think they will. It's a really good school, with a brave staff. I think maybe I'll go back someday.

Whatever. The point is...

I hope you had a fun week, and lots of adventure on Sammy's favorite day. I have e-mailed all the book winners and want to thank everyone who participated. Loved the pictures and the creativity involved. The prize for "funniest" goes to a submission for "Lady Lana" on a tabletop holding her cheeks, with a mouse in the foreground. Cracked me up!

Our Halloween: We live off the beaten path, so Mark and I have taken to doing reverse trick-or-treating in our neighborhood. We head out with a bucket of candy and stop cars and adults and kids trick-or-treating and give them candy. And since it was a nice night out, we also threw handfuls up at people sitting on balconies sipping their adult beverages.

That was quite entertaining.

Switching subjects, I know there are questions out there.

Here are some answers.

Sammy movie news: Hope to have something for you by the end of the year.

Contest for name in last Sammy: I haven't forgotten.

The picture on this post: Mark and I are playing around with images to wrap the van on our Epic Road Trip Adventure. We're thinking this would look good / funny / interesting on the back window. It would be in color, but Mark cobbled this together for tonight's post to give you an idea. Comments?

That's all for now. As always, thanks for checking in. I'll see you in the comments!