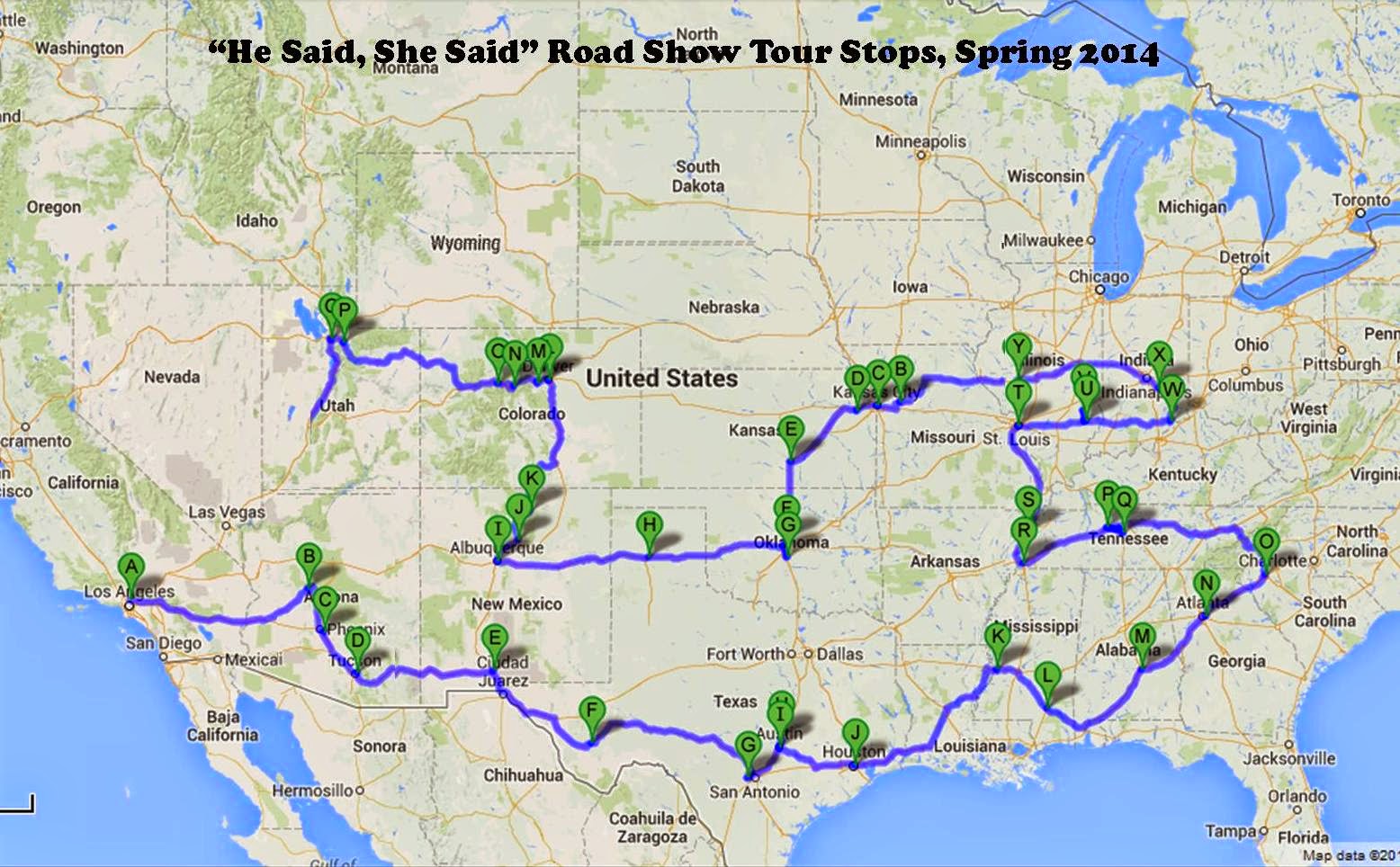 The best part was meeting "Sammiacs." I can't even describe how wonderful it was for me to meet y'all.

For you Northies who have been asking for info about the fall loop through northern states, we'll get information to you as soon as we can.  For now, I still have to unpack!

But before I do, I want to present a contest!

I know I said I wasn't going to have one for the ARC of Sammy Keyes and the Kiss Goodbye, but how about the final book? I never said I wouldn't give one of those away! So when my author copies come in (usually a week before they're available in stores), I'll turn around and mail one out to the contest winner.

Here are the directions:

Send me an e-mail at : mail@exercisetherighttoread.org
In the Subject line, type: KISS GOODBYE CONTEST
In the body of the e-mail :


Thanks to everyone who followed along on tour with me, here and on Facebook and Twitter. It really was great to have you involved. And for those of you came out to an event (or drove ridiculous distances to meet me), I will always cherish meeting you.

Now get busy and give the contest a shot! Your deadline is Saturday, May 31st at midnight!

It has been a great week, with wonderful encounters and some exceptional store visits. But I'm tired, so instead of details, I'm afraid I'm going to tell you a little story about a horse.

I don't think my parents knew much about horses. Or mules. But one backpacking vacation they rented us one of each to hike in some of the camping equipment. We kids were all for that. It seemed so extravagant!

I don't remember a lot of details about this backpacking trip, other than that the pack animals seemed really slow hiking in. There was the novelty of taking turns riding, but that wore off quickly because it seemed worse than hiking. It felt slower than walking. And it was uncomfortable. The swaying side to side. The being jostled about. Plus, it was scary being up on a horse. It seemed so big.

What is most vivid in my memory about this trip was nearing the end of the hike back out. We were a couple of miles from home base when those lumbering beasts came to life. Especially the horse. My dad tried to control it, but the closer we got, the harder that was, until, in the end, the horse just took off with pots and pans clanging as it galloped home.

I tell you this little story because tonight, I feel like that horse.
Posted by Wendelin Van Draanen at 8:16 PM 7 comments:

Tour, Week 6 (Punked By A Librarian!)

Over the years, I've visited a lot of incredible schools for "Author Day" but until this week I'd never had a parade.

A parade! With floats and a marching band and kids cheering as we drove down the street.

It felt like the middle school version of Coming Home week on American Idol, and it took place in Oklahoma where Central Middle School (which has hosted me several years in a row), has become a home away from home.

The day didn't start with a parade. It started with strict instructions from the school's librarian to meet her in a church parking lot near the school. (I've learned not to ask too many questions of this librarian. I've learned that she has a vision and you just need to go with it.)

And then the day really started.

We got pulled over by a cop.

At first I thought it was a prank, set up by said librarian. So I hopped out of the car.

"Get back in your vehicle," he barked. And, from his no-BS demeanor and seeing how he was fully decked with bullet-proof vest under his uniform, sun glasses, and a firearm, I got back in the vehicle.

"Why are you here?" he asked, scrutinizing the van.

So I explained. About the librarian. And us being authors. And doing a school visit.

"This area is under surveillance," he said. "You need to leave."

Because of his demeanor, I was now totally convinced that we had to get the heck out of the empty church parking lot before we blew his undercover operation. But still. It just came out... "Surveillance?"

He frowned and beamed authority through his sunglasses. "Yes." And then he added, "I can't believe Officer Borsch hasn't told you about this."

"Aghh!' I cried and jumped out of the van and shoved him. "You totally had me!"

He laughed and was clearly pleased, and then the librarian jumped out of his police car in a Sammy Forever shirt and I immediately started crying.

And then we headed for the school, with our lights-flashing police escort, where kids in high-tops and on skateboards greeted us with cheers and signs as we wound our way through nearly 800 kids, teachers, and school staff through the campus.

And then we watched as the parade--complete with marching band, cartwheelers, skateboarders, and shopping cart floats based on our books--went by.

And now, even though they can't capture it, here are a few pictures anyway!

And here are a few of the floats, all built up around shopping carts.

And Mark got a his own life-sized display, complete with standee and outfitted "Bad Mobile" 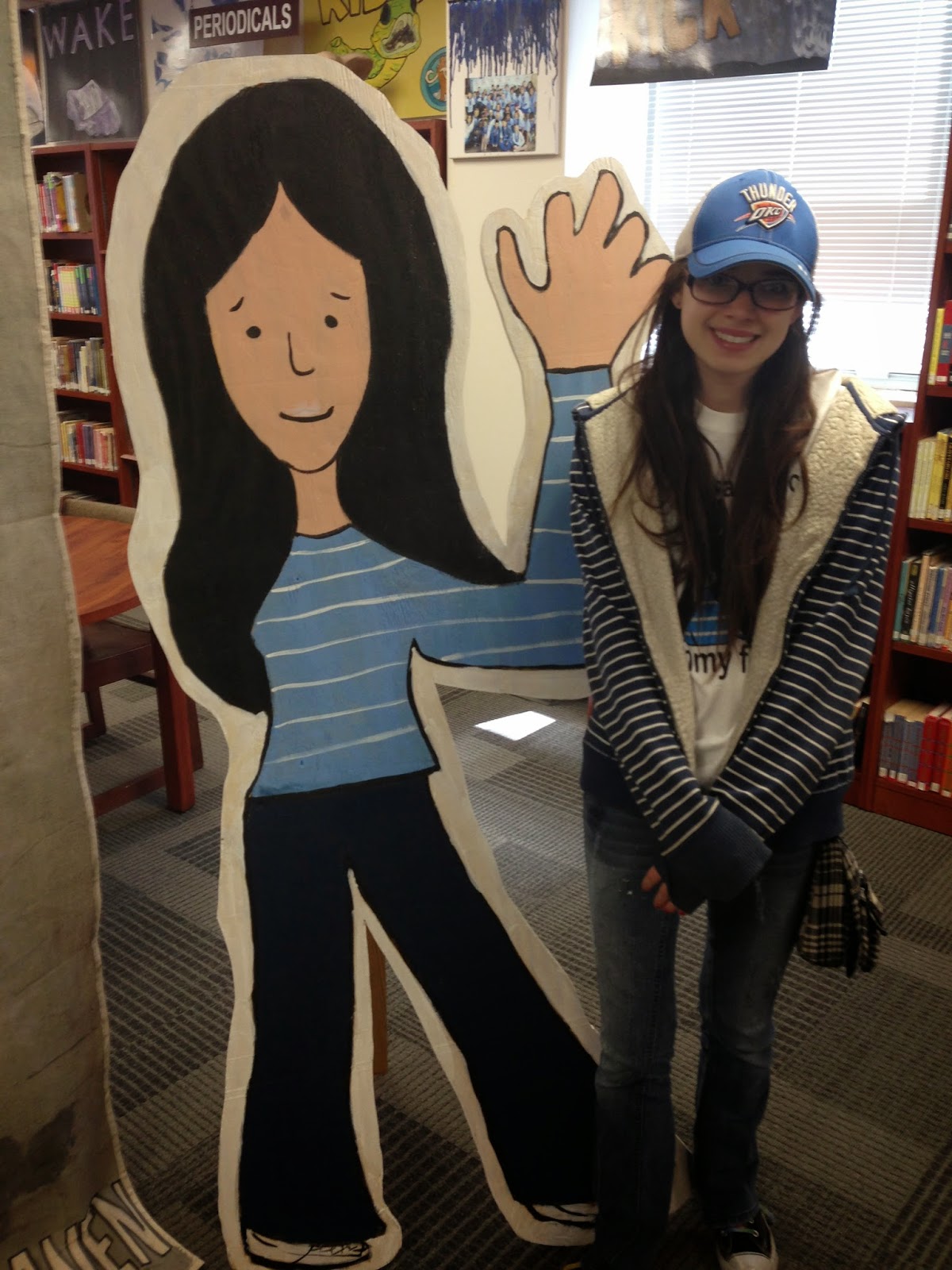 Posted by Wendelin Van Draanen at 9:12 AM 19 comments:

What's also nice are the common threads, that do tie things together. We are all part of the same country. We share a history, and the viewpoints of that shared history from different regions has been very interesting.

"Main St., USA" is now something I have a picture for. Before it was just a political phrase. Now it's a real place that was once at the center of town, and often still is. It involves brick or stone. Lots of it. And vertical storefronts. And buildings that have their original name and the date they were built cut into stone.

There is a reason that one out of every four of the independent bookstores we are visiting on this tour is located on the Main St. of their town--bookstores began and belong in the heart of a community.

A lot of the bookstores have had a cat. Or two. One had three.

Some have a dog. Or two.

Many are run by couples. Or sisters.

Most have been in the book business for decades, weathering changes in the industry, the economy, and the shuttering of other small businesses on Main St., USA.

All of them want to be booksellers. It's what they love. It's who they are. 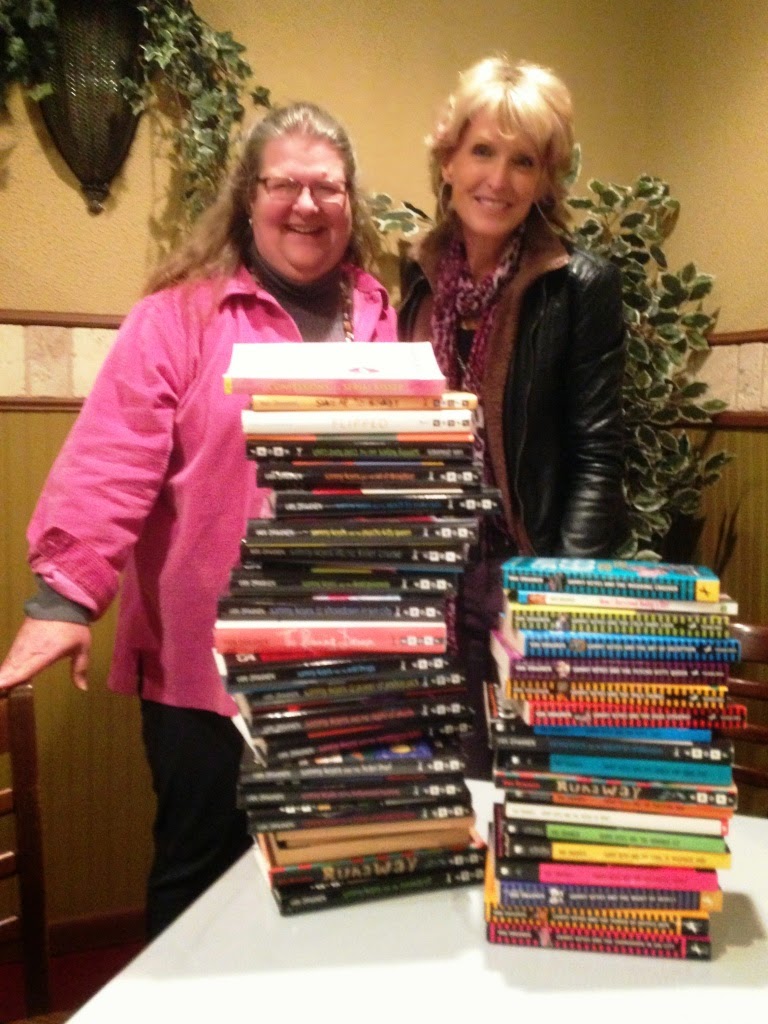 At almost every stop, there have been Sammiacs. Awesome, incredible, wonderful people...males (one named Casey!), females (one named Sammy, and one named Heather!) (Yes, at different stops.)

And there's been a huge range in ages, which just goes to show you what we've known all along--Sammy cannot be held to a tidy little classification. She knows how to bust out and sidetrack!

The attendee drive record is 7 hours "for shoelaces" and the number-of-books record was broken this week by a woman from Michigan (4 hrs., one way) who had over 40 books (many of them first printings).

On Friday a girl and her mom traveled 4 hours for our 6:30-8:30 PM event, and had to drive back that night because the girl's college graduation was the next day.

So the trip has been educational, heartwarming, and fun, and I'm looking forward to the coming week, which will have us traveling through Missouri, Kansas, and Oklahoma.

Can't wait to see who we'll meet there!
Posted by Wendelin Van Draanen at 5:24 PM 4 comments: