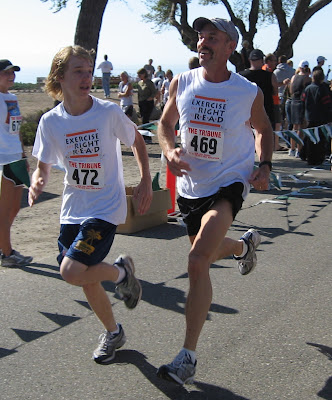 It’s easy for runners to get caught up in the clock and judge the success or failure of every run strictly by the numbers on your watch as you cross the finish line. In fact, runners are such a chrono-centric group that the term “personal best” has come to mean simply “fastest time to date”, with no regard to how good the run actually was, in terms of enjoyment or natural beauty or fitness or camaraderie on the trail.

Well, I got a little lesson in this today, and I hope I’m smart enough to retain it for life.

Today I posted what was by far my “worst” half-marathon time ever, yet the race was definitely a personal best. This was because I had the distinct pleasure of coaching, and then running with, my younger son as he completed his first half marathon. (He’s the one peeking over our shoulders on our home page…)

He’s only 13, and last year when our older son (15 at the time) completed his first half, the younger one announced that next year, he would do it also. Wendelin and I privately had our doubts but we decided to take him at his word, so this summer when we started training, we invited him along and he joined in without (much) complaining. The boys & I spent a lot of Saturday mornings slogging through the hills in our area, but in the end it was worth it… as always.

Wendelin and our older boy had a great day (and he beat his previous time by a minute, so he had a PR in the traditional sense of the word). But it turned out that out of almost 700 entrants, our younger son was the youngest of all, and he placed first in his age group (okay, there were only three boys under 15, but still…). So not only did he finish (his real goal) but he medaled as well (a nice bonus which really put the icing on his day).

Last year after this event, Wendelin told me what a great feeling it was, running with our older son as he crossed the finish line for the first time. Today, I truly understand what she meant. I’m probably happier than the guy who took first place. It really was a Personal Best.
Posted by Wendelin Van Draanen at 7:36 PM

What a wonderful story! It really does make you think about what a true accomplishment is and it really isn't about the clock or just checking things off.

What a wonderful family event. Good for all of you!!