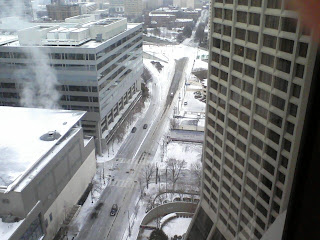 I made it! And what's weird is that for a day that we were all thinking was going to be nothin' but trouble, everything went smoothly. I can't say as much for people traveling on the roads of Atlanta last night because during our trek from the airport to the hotel we passed by at least 6 cars skidded out on the freeway in the snow. My driver said they'd been there since the big storm last night. They're just in the lanes of the "freeway" which was icy and snowy and had a max speed tonight of about 25. I felt like I was in some end-of-the-world movie -- snowy roads, cars abandoned, big city buildings, and us, crawling along the freeway at 25 mph with nobody else around. Yeah, it was a little eerie! The driver was very careful, but we did slip slide a little. He told me his name, but each time we skidded a little I wanted to pinch my nose and say "Skidworth!" You have to be a Sponge Bob fan to understand why I think that's so hilarious. Anyway, how lucky am I that my tour started today and not yesterday? Skidworth! Okay. Enough of that. Obviously I'm punchy. Two very interesting chance meetings at the airport today. My connection was in Phoenix, and I've been to Phoenix enough times to know that Terminal 4 of the airport is the Barry M. Goldwater Terminal. It's in big letters outside, and inside. If you're one of my young readers, you almost certainly have no clue who Barry M. Goldwater was, so here's a little history: He was a senator from Arizona who ran for president against Lyndon Johnson in 1964, a year after LBJ took over the presidency following John F. Kennedy's assassinated. His senate seat is now filled by John McCain. Well, today in the Phoenix airport, at the gate for the Atlanta flight there was this guy, probably about 70. (No, it wasn't BMG, he died in 1998.) He was dressed in tasseled loafers, dark slacks, a white shirt, and vest. He was sitting next to me in the terminal, and was on the phone most of the time. Shortly before we began boarding we talked a little -- just pleasant do-you-think-we'll-make-it-to-Atlanta type chit chat. Which led to talk of air travel. Which led to how we don't like it. Which led to him asking me why I...a 'girl' in snow boots, jeans, two sweatshirts, surrounded by carry-on luggage...would have cause to have to travel. Obviously, I don't look like much of a business person. The pink streak, I'm sure, doesn't help. So I told him that I write books--novels, mostly--for kids, and that this was the first day of a book tour. That seemed to really interest him, and then it came out that he'd written a book, too. So I asked what he'd written and he said it was a book based on a journal his dad had kept. "So...was your dad somebody famous?" He nodded. "Barry Goldwater." So, there I am, standing in Barry M. Goldwater Terminal, talking to Barry M. Goldwater's son, whose name turned out to be....Barry M. Goldwater Jr. I continued talking until I left him in first class and made my way back to sardine class, where I somehow jockeyed into an empty aisle seat with no screaming baby next to me (poor dear) and an empty middle seat beside me. (Bonus!) The Window Guy was quiet for about half the trip while I ate and worked, and then we started talking to each other. You know. Small talk. Like, isn't-it-amazing-that-we're-actually-on-our-way-to-Atlanta type chit chat. And then it came out that he's an up-and-coming reality show personality who goes by Bully the Kid. He's an announcer for events based around pit bulls, of all things. It's not dog fighting, it's more the opposite -- he gets dogs that are used for fighting unchained. Smart guy, and a good guy, too. Really solid. We talked about Hollywood and how to keep life real because things are moving really fast for him and oftentimes people skid out of control in those circumstances. Skidworth! Never mind. That was just dumb. But hey, I'm tired and I'm allowed. Wow now it's 12:30 AM Atlanta time. I'd better quit yakking and hit the sheets. Thanks for stopping by. And for worrying about me. I know some of you were and I think that's really sweet of you. But I'm fine. Everything's cool. Cold, actually. Maybe I should turn up the heat before my nose starts dripping icicles. Skidworth! Shut-up, Wendelin, and go to bed. Yes, ma'am! (Skidworth!)
Posted by Wendelin Van Draanen at 8:29 PM

Let the Running Dream begin and may it bring hope, encouragement, and inspiration to a multitude of readers. So glad you have safely arrived in Atlanta. Be careful out there in winter wonderland.

Just heard that today's event is cancelled. Drat. I had my hiking poles and snowboots all ready to go, too. Still, it's better to keep people safe.

I hope you're able to find something interesting to do in Atlanta -- I highly recommend the Martin Luther King Center (if it's open); it's not too far from downtown. http://www.nps.gov/malu/index.htm

Beach: So sorry! Yes, you heard it right. Icy, icy roads. Closed schools. At least I'm not stuck at an airport. Sorry to be missing you. Tomorrow doesn't look any more promising...