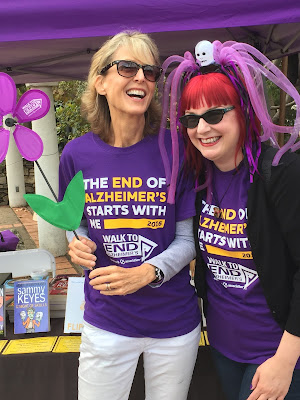 After trying several scenarios of in-home care as an option for our mother, my sister and I met with the family liaison at a dementia-care facility. Her name was Jenny, and she was empathetic and informed and had an almost magical way of calming us down. These were frightening, choppy waters for us, and Jenny helped us feel like we weren't going to drown after all.


Five years later, the book launch for The Secret Life of Lincoln Jones happened yesterday at an Alzheimer's Walk because of Jenny. In the time since my mom had passed away, I'd run into Jenny around town. With her colorful styling and sunny personality, she's easy to spot in a crowd But beneath that fun and fashionable exterior, there's a serious woman with a masters in gerontology--someone I really liked.

So when the manuscript for Lincoln Jones was ready, I asked her to read it and give feedback. I wanted her professional notes, but I also wanted to know if she agreed that--although the book is aimed at 4th-6th graders--this was a book caregivers would also really enjoy. In my mind it definitely was, but I wanted the opinion of an objective third party from inside the caregiver community.

I was a little nervous for her to read it because there's always the overlap between real life and the fiction it inspires. I hoped the story would be received in the spirit intended, but...people react to things from their own perspective. I've learned there's no guarantee that your humor will be shared, or that your outlook will be theirs. 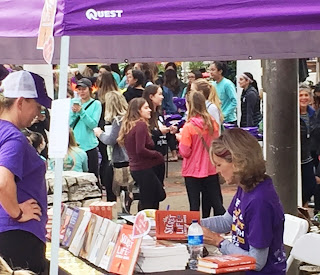 After she read it, Jenny and I met for lunch. She very enthusiastically reinforced my thinking on Lincoln Jones being a book caregivers would love, and we began brainstorming ways we could connect the book with that community. Jenny is how I wound up meeting the development director of our region's Alzheimer's Association, and how it came to be that my first stand-alone novel in almost six years launched at an Alzheimer's Walk. 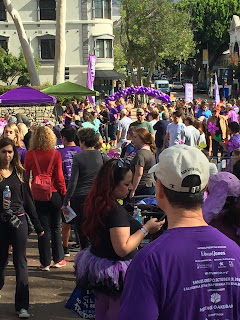 Since my mom had passed away, my chance conversations with Jenny had revolved around our common ground, which had to do with my mom and my family and now my book. I never like that imbalance, so with some time to spend over lunch, I was determined to get to know Jenny better.  And, holy smokes, why did it take me so long to take a deep breath and listen?

At the Walk yesterday, the town's mayor spoke about how Alzheimer's has affected her family. You could tell--behind her welcome and support for the Walk, there were stories.

And later at my booksale table, everyone who bought a book gave me a little window into their connection to dementia or caregiving and it struck me again--everyone has stories--stories that are as moving and vital to them as mine are to me. 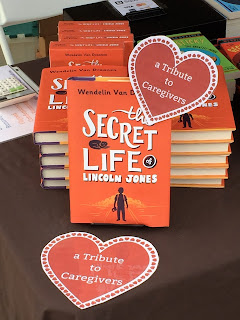 In the pages of the book, Lincoln's teacher urges him to open up. "Your story matters," she tells him, and once again I find myself in the Twilight Zone of learning things from my own character.

Lincoln doesn't open up easily. In part because he's afraid to, but also because he hasn't found the right people yet to trust.

This is actually not uncommon. For adults, and for kids. We're wary of being hurt. Maybe hurt again.

So if you already have a close group of trusted friends that you confide in, reassess the balance of those relationships. Remember also to listen.

And if you don't, I hope that reading Lincoln's story helps you find the courage to let people in and to share what's in your heart.

Because it's true--your story matters.
Posted by Wendelin Van Draanen at 11:30 AM

That is so true!! Oddly enough, I often feel this imbalance most with my own mother. We talk at least once or twice each week, and 90% of the conversation revolves around ME and my life, kids, problems, dreams, etc. My mom is a saint and always says that she loves talking about all of my stuff with me when I address my one-sided babbling, but it's so true that when you care about someone, the sharing really needs to be two-way. Bonds form when we share our hearts, so those bonds are strengthened when others share their hearts in return. I love that your book launch was at an awareness walk. Perfect. I am SO excited to read about Lincoln--I ordered the book for my birthday gift from myself (and from you I guess, haha--I'm notorious for ordering myself birthday books) but I gave it to my husband to keep until Friday (my birthday) so I can resist the temptation to sneak a peek sooner. It's fun to have a good book to look forward to, but also torturous! I was walking through a bookstore yesterday and may or may not have visited Lincoln Jones on his shelf and peeked at the first page or two before hastily closing the book, looking around guiltily, and beelining it for the door. Birthdays and books just GO together, and I can't wait!!!

I love this image of you sneaking a peek at your birthday book in a bookstore after hiding it away from yourself at home. This really tickles me! I have a little idea about your mom -- ask her to write down little stories about her life when she was a kid /a teen / a young mom...stories you can always have and read and share with family. She may want to hear all about what's going on with you over the phone, but tell her you want to trade with her stories. I bet she'll go for that!

This is a very important message that you have given through this post. We do not have time to listen and give time to our loved ones. We should take time out to share our hearts and thoughts.