When The Ceiling Hits The Floor 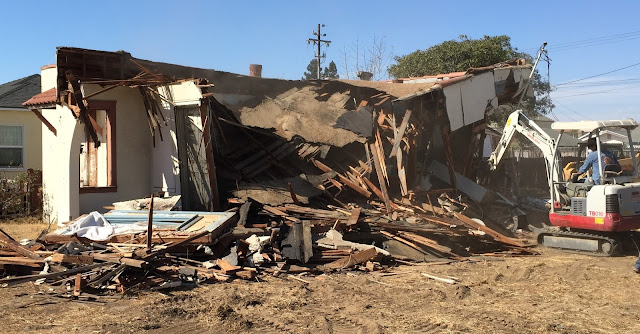 The Hope-in-the-Mail house got torn down this week.

Which was surprising to me. For most of the time we rented it, I just wanted to move. Mark has always said that we'd look back on the place as our honeymoon cottage, but after being crammed inside 400 sq. ft. with two kids and two dogs, after too many gunshots in the neighborhood and drug addicts on our porch, after recurring mold on the walls and leaks in the roof, I disagreed.

When we finally moved out, other tenants lived there for a while, and then the house went vacant. Got boarded up. Sat for years, crumbling.

Somewhere along the line I started calling it the Hope-in-the-Mail house because it's the place we came up with that saying. It's the place we learned to let the manuscripts we'd mail off to New York buoy us through our workday. It's the first home our kids knew, and the place I wrote the first six Sammy Keyes.

Mark and I went to witness the demolition. I don't know why. Maybe to say goodbye?

What I know for sure is, I would rather work from dawn to dusk building something than watch someone else's work be torn down. There's something terribly sad about seeing anything--even a crumbling house--destroyed. It brings into sharp focus how temporary our efforts, our accomplishments, our lives are.

The guy operating a skip loader recognized me. He's done work at the house we now live in. A house much different than the one he was tearing down.

I was already kinda weepy from watching the crew work. "You're probably wondering what my fascination with this house is," I sniffed."People who know where we live now usually jump to wrong conclusions. This is where we started."

He was surprised, but got it right away. "Did you live here with the kids?" he asked.

I nodded. "Until they were six and eight."

He smiled. "I may own my own business now, but when I was eight, I was a Chicklets boy."

"No kidding?" I asked, because if you've ever been just south of the California border you know exactly what that means. He's come a long way from that life--I'm imagining a real hope-in-the-mail story, one I plan to follow up on.


Mark and I left shortly after that. Neither of us wanted to watch any more. But after we got home I started kicking myself about the mailbox.

Why didn't I take the mailbox?

It was right there, bolted to the stucco wall of the porch. Ugly. Old. Metal. Full of spiders. 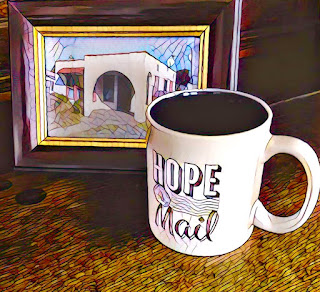 I wanted that mailbox!

I tried to track it down by phone but it was already gone, which is probably for the best. It's had a good life. A useful life.

And really, in the end, it's not the stuff that matters. It's the intangible things we bring to a situation, and what we learn and take away. I learned a lot in that little house. About who I am and what I believe and what kind of person I want to be.

It's not the mailbox that's important.

It's the hope that flowed through it.

But I still think of it as our (very) little honeymoon cottage. :)

I love this story! You have such an amazingly clear, insightful perspective on life and success. Your integrity, transparency, and hard work are as impressive as your accomplishments. Thanks for always sharing from your heart.

You will always have the lovely painting of your house (who did that--very nice)and the Hope in the Mail cups.

Mark, you are clearly still the wonderful guy I married.

This may be the best blog post I have ever read. Thank you, Wendelin.

Dear friend; I love this story! Like every successful individual, you understand and appreciate the journey and lessons learned that got you where you are now. I'm proud to know you and Mark. ❤

One of my colleagues at Central just sent me a text saying she read this blog and bawled. I told her I didn't see the "Hope in the Mail" house in person, but the first thing you did when you gave my friends and I the tour of your beautiful, yet very functional, very lived-in home several years ago was to show a camera photo of the first house where I think you used a pull-down ironing board to write the first Sammy Keyes books early in the morning before teaching high school computer science all day.

I'll never forget that! You have dreamed big and worked hard for everything you have, and that is the message I love that you share with audiences across the country. You are also extremely generous with what you have earned.