And Then There Were Mugs 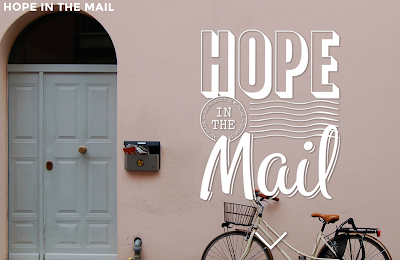 At last year's Central Coast Writers' Conference, I met a scriptwriter/ novelist named Doug Richardson. He was part of the impressively credentialed staff that was brought in from Los Angeles to help aspiring writers get up to speed on the hows of Hollywood. We were backstage waiting to go on for the opening night "keynote panel" when we were first introduced.

I'm not well-versed in the whos of Hollywood, but even I had heard of some of movies on Doug's credits sheet--Die Harder, Money Train, and Bad Boys.

It was an impressive resume, to say the least, but he didn't want to talk about himself or his work. He wanted to talk about Flipped.

Because it was his daughter's favorite book & movie. According to him, she was obsessed with it.

Clearly, this guy was all right. Not just because he was so enthused Flipped, but because as the conversation unfolded it became obvious that he was a really caring dad. Doug is not a gushy guy. He actually acts all gruff and curmudgeonly. But when he talks about his kids, his wife, his family, that act becomes completely transparent. 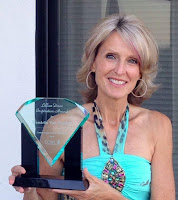 Anyway, last year the conference committee bestowed upon me the Lillian Dean Inspiration Award, and in exchange for my diamond-shaped trophy I was asked to give a short -- three minute or less -- acceptance "speech."


Since I was receiving an award for being inspiring, I tried to say something that would help the audience of aspiring writers continue on their quest for success--in whatever form that was for them. Encouraged to do so by my very supportive friend Wendy who loved the expression, I shared about putting "hope in the mail" and how I started using the phrase during the long rejection phase of my quest to be published.

Afterwards, Doug told me all the reasons he loved the expression. A lot of people did. But after the conference, he stayed in touch with me and kept mentioning it, and even wrote a post for his very entertaining blog about it.

Our son Connor is the one who saw a broader application for the expression. We were lucky to have him home for the summer between graduating college and relocating to Portland, and during that time, he took on the task of painting the Big Picture for me: Hope in the Mail could be an on-line home for people who needed inspiration--a place to go to hear about someone else's path through hard times in pursuit of their dreams. From written stories to podcasts to videoblogs, the site could collect stories from around the world and help lift the spirits of anyone who visited. 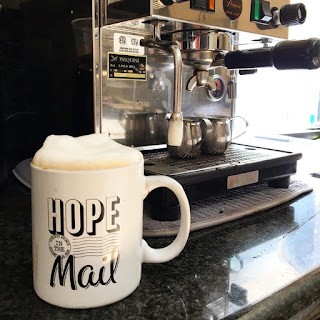 There could also be mugs.


So now, a year after my first encounter with Doug--at our second CCWC conference together this weekend--I gave him a coffee mug and told him how his reaction to my little speech contributed to putting the wheels in motion. Today he posted this wonderful picture.

In addition to mugs we also have a fledgling website, which I hope you'll visit. Tell us your story, or tell us about someone you think would help others put hope in the mail. And sign up to get some e-hope yourself once we're truly in motion. Everyone needs a dose of hope once in a while, right? Go find it and give it at HopeInTheMail.com

PS You can find this teddy bear of a curmudgeon (also known as Doug Richardson)... 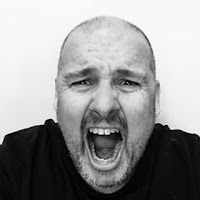 ...at his website at DougRichardson.com, where you can also check out his books, including the Lucky Dey thrillers.

I love this idea! Mail really IS a hopeful thing in itself. When I open the mailbox and see a stack of envelopes there, I automatically start hoping that at least one of them is from a living, breathing person who is writing to ME because we're friends, instead of advertising to me or billing me or bullying me! Haha, mail is hope. I couldn't get the new website to load this time, but I'll try again later!

Shaina, that is so true! Even though paper mail is 95% junk and bills, I always hold out hope that there'll be something good in it. The website seems fine...I hope you'll try it again!