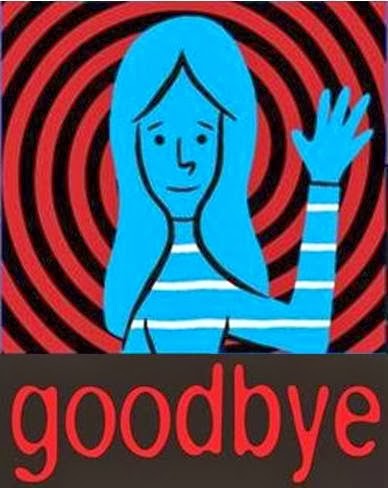 When the ARCs (advance reader's copies) for Sammy Keyes and the Kiss Goodbye arrived I cried (again). It just sort of hit me (again). But they arrived with the re-copy-edited manuscript, which meant that I had to quit ignoring that, although the story was already bound as a pre-book, it was not yet a book and I had work to do.

This was the first book in all the times I've been through this (seemingly endless) revision process that I received the ARCs along with the manuscript. So it set up a  new process for me, without me even realizing it.

Usually, I get the manuscript and I go through all the mark-ups and weigh what's been suggested (and wonder if the comma that's been edited out wasn't one that was put in by a different copy editor during the previous go-round).

This time, I had the ARC in front of me, too, and (just for ''fun') I picked it up and started reading it. It sucked me right in! But by the end of the first chapter I'd already noticed three little things that I thought could use tweaking.

So I checked the manuscript to see if the copy editor had noticed those tweakable areas, and sure enough, there were notes by two of them. Which showed me that I wasn't just being picky. If I stumbled and she stumbled, some smoothing definitely needed to be done.

What I wound up doing, was reading a chapter of the clean version ARC (with no notes from anybody), making corrections in the ARC as I saw fit, then turning to the manuscript and going through the copy editor's notes and suggestions. There was always some overlap, plus I got the benefit of being able to read the story for flow and humor and sense (like, is it clear to whom that pronoun is referring?), without the distractions of other people's notes.

It took me over 30 books to discover it, but I really like this new process.

I know that statement will drive some of you crazy (because you're dying to read the book, not because you think I'm an egomaniac), but this book makes the series feel whole. I know I said before that I thought I should maybe stop after Sin City because I loved the way it ended, but writing Killer Cruise was very satisfying in the Sammy/dad arena, and now with Kiss Goodbye, I know it really is time.

That didn't mean I didn't cry (again) when I read the last page.

And I predict that 191 days from today, you (my beloved Sammiacs) will, too.
Posted by Wendelin Van Draanen at 9:43 PM

I know I will cry. I was almost in tears when I was thinking about what the description for the book said on Amazon. This books is going to be emotional, I feel it in my bones.

The new process sounds like it is working really well. It it a great idea.

In other news I am working on this playlist for your roadtrip and I think it will be a little interesting. At think I put a like 3 or 4 Disney songs on it. But who can't love a good Disney song every now and then?

I want to read it now. So you won't be giving away ARC for this book will you? I don't think i can wait that many days.

I don't want to read it but i can't wait to at the same time, i'm having mixed emotions on the matter.

I really hope you decide to write another spinoff like Holly's or something so that this adventure doesn't really end. Or that the TV show/ movie idea gets picked up.

Hi Ms. Van Draanen, I was wondering if you could give me the name of the font you use on the Sammy Keyes covers? The one that says 'goodbye' in this post?

ARCs: It seems wrong to let them out. It seems more fair to wait for Sept. 9th

PLAYLIST: Looking forward to it. My fav' Disney songs come from 101 Dalmatians (Cruella, DeVille, Cruella DeVille, if she doesn't scare you, no evil thing will...!)

Hi, Mrs. Van Draanen. I recently started reading your books and I don't know which books I like better. I am 9 years old. I really like The Gecko and Sticky books. They are "asombroso" but I am sad there is not a number 5. Do you plan on writing any more? I really want to know who Damian calls? I'm going loco berry burrito wondering. My mom thinks you will not write any more Gecko and Sticky. Is this true?

Now i feel less polite since I do not refer to you as "Ms." or "Mrs." van Draanen. It seems so formal considering the fact that we discuss the weirdest things on here.

Oh and yeah I figured that about the ARCs... well I only have to wait until two days after my birthday so maybe i can convince my parents to buy me it... though i've never bought a sammy keyes book (gasp!) but i yet have like ten of them.

P.S. Disney songs are the greatest

I know I will be crying as I read the final Sammy Keyes book. Ten years of Sammy is not enough, saying good-bye is going to be hard

Just saw a picture of the van and it looks fantastic! So much cooler than I was picturing. I love all the covers, they look amazing!

The new process sounds interesting. Did you catch anything the copy editors missed? I usually only notice 1-2 mistakes in the Sammy Keyes books, which is less than many other books I've read, but I'm sure even one must drive you crazy as an author.

I understand about not giving out ARCs. I hope I'll have some spare cash to order it so I don't have to wait for the library to get it this time.

The boy I babysit also wishes there were a 5th Gecko and Sticky, but I thought you said they were finished? It's a superhero story: good will triumph each time but must stay vigilant because evil is always lurking...

That sounds like a fabulous way to edit of your book (the last read-through at least). And I'm really glad you started reading (just to check, ha, I know how that works) and got sucked in -- because if you can get sucked in when you already know the story and have gone over the words a billion times, the book is going to be excellent when it finally gets to us.

O.O the Sammy font has a name? It's not called "the Sammy Keyes font"? (I love that font. I like both the paint-and-cardboard-collage hardcover art and the cartoon paperback art, but I'm partial to the hardcovers because the paperback spines are not Sammy spines.)

ARCs: Yes, I agree, it makes more sense to have everyone crying over the Very Last Sammy at the same(-ish) time.

I have songs for your road trip playlist! I'm not as dedicated as Kylie ;) these are just songs that came on the radio at work and I said yes that one.

The Heart of Rock 'n' Roll is the Beat, which is kind of perfect because it ties in to Road Rash (see title), Sammy Keyes (L.A., Hollywood, the Sunset Strip is something everyone should see), and there's a bit where they shout out cities (Chicago! Detroit!) and you could easily drown them out with the next two cities on your list. And then there's the bit when it sounds like they could break into Funky Town. I just. The only problem is it might make you want to dance too much. Or maybe that's me.

And Free Fallin', which I got to hear for the first time when it came on the radio at work. (It was really fun connecting this song on the radio with a song I have only read in a book, hearing the first line and thinking, Is this...? and then getting to "a good girl, crazy for Elvis" and thinking, Yup. -- although it was much slower than I imagined it.) Anyway, I thought it might work for the late-night your-turn-driving part of your playlist (if you're going to do that).

I'll see what else I can drum up.

Norma! I hope you see this. I've been meaning to answer your question forever. The Gecko & Sticky. I LOVE the Gecko & Sticky and I'm hoping someday to write some more...but by then you will no longer be 9 years old and on to other things. Thank you very much for you nice comment. It made me laugh in the best of ways! Because (repeating myself) I love The Gecko & Stick books and wish more people knew about them. So I really appreciate what you said, and I'M SORRY it took me forever to write back. Please tell me you saw this! And...for now it's time to say, Adios!

Jessica: YES, I found mistakes that the copy editor had missed...and she found ones that I had missed. It's so strange to read something so many times and still MISS things. I think I'm a glossy reader--I gloss over things seeing what is supposed to be there?

EVERYBODY: It's okay to call me Wendelin. I prefer that! Just don't go crazy and call me Wendy. I'm way too tall to be a Wendy. And not nearly cute enough!