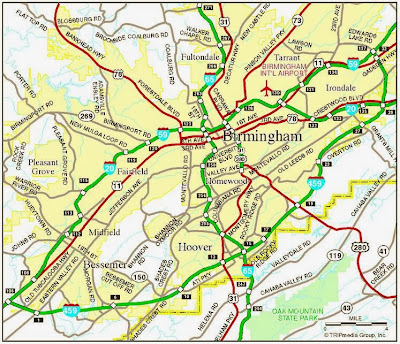 Many years ago, when the kids were still little and it was a huge deal to leave them, the school & library director at my publishing house asked if I'd be willing to participate in an event in Birmingham, Alabama.

I had no clue how hard it would be to be to get there (very), or what participating in this event would entail (uh...breakfast?).

Yes, it took all day (and 3 planes) to get to Birmingham, and the following morning after breakfast with a small group of librarians, I went back to the airport and flew home.

"I am never going to Birmingham for breakfast again!" I told Mark (and the kids and the dogs and the dishes). And when other questionable invitations would came along, Mark would say, "Wait. Is this another breakfast in Birmingham?"

After all, it had been a colossal waste of time, and for what?

Well, the funny thing is, about a year after the infamous Breakfast in Birmingham, librarians from a group of middle schools in Homewood, Alabama invited me to come visit all their schools. As in, paying school visits.They had a bunch of them lined up.

"We met you in Birmingham!" they said, "At the breakfast!"

I loved everything about that visit. From the kids at the schools, to the people who taught them, to the way food was always on the table, to the humorous phrases they used, to the way the whisked me into a second-hand store after I told them my little Edgar dress story. (Have I told you my Edgar dress story?)

In fact, I was so charmed by it--by all of it--that I took notes.

Notes that would become the voice and the flavor of Swear to Howdy--a book I wrote with Alabama in mind; one I had those same librarians read and weigh in on before publication.

In 2006 my "Southern belle" friends had me back for more school visits, and we have stayed in touch since. I've tried to "explain them" to Mark, but really, their hospitality is something you more have to experience than can explain.

So I let them know we were embarking on this wild road trip tour, and that we would take a little detour into Homewood if they wanted to have a reunion. Almost right after I sent the message, one of them messaged back, "I'll cook!"

So after speaking at the Alabama Book Festival in Montgomery, we'll head to Homewood to meet up with the ladies. And the next day you know where I'll be dragging Mark, right?

Into Birmingham for breakfast!
Posted by Wendelin Van Draanen at 7:19 PM

I have yet to experience southern hospitality, but from what I have heard and just read it is fantastic.

This post kind of goes along with something I was thinking today. I was going through pictures for a calendar I'm making my sister and I would look at some photos and think that you can never tell what moments are going to matter. I never knew that 10 years ago me falling asleep next to our couch in my bathing suit would be one of my favorite memories to look back on. It is kind of like you could have never have new how important that breakfast was when you were there, but now it has done so much for you.

I don't know the Edgar dress story, but I'm not sure I've ever read the whole blog archive, so I might have just missed it. (Apparently there's a Sammiac secret handshake -- I mean song -- that I don't know, either.)

Those Homewood ladies are going to show up the Decaturites/Atlantans (most of us are transplants, not true Southern ladies, though I have friends who are, so I know what you mean -- you can tell I'm not because I cannot abide sweet tea, and I like to keep the meat out of my veg, thank you very much). That's okay, though, because we're "a clean, green, safe, and thriving community" and "a city of homes, schools, and places of worship" (those do not do it justice, I promise... it's so much more than that, and much more than a hotel room on a barren icy street).

Your experiences in Alabama sound like they turned out a lot better than mine did! And that's all I'll say about THAT subject.... (Really, it's for the best. *nodding*)

Maybe next week I'll tell the Edgar dress story. I can't find it in the archives. I don't like repeating myself, though, so if anyone remembers, speak up.

Jessica, I'm looking forward to seeing Georgia during a more peachy season :-) FYI, we've got 4/21 penciled on the calendar for LSoS--it'll be after the first of the year before we apply ink.

Kylie, that memory makes me so curious!

Ryan, really sounds like we don't want to know!

From what I remember it was the day that I can first remember swimming on my own. The week before my mom got me this awesome new bathing suit that I couldn't wait to swim in. The day finally came where I got to wear it and swim on my own. I spent all day in the pool, between splash fights and just floating it was the best day of that summer. When my mom called me in for dinner I went inside and sat on the speaker next to my couch and just passed out. I don't think I would have ever remembered that day without that photo.

"I'll cook!" Oh, you know it's on if somebody is cooking.

Kylie, a calendar with a different picture for each day? Wheesh! That's a lot of work for not very much time to enjoy each picture.

I don't recall the Edgar dress story. Yes, do tell!

Jessica, I think the only ways to have heard the Sammy Keyes Song are a) to have had Wendelin sing it at your school, and b) to have stumbled upon a copy of Art of Deception with a CD in the back, so it's not really a secret handshake of Sammy Keyes fans. The exposure is too random! Something like "cool your heels" (or Holy Literary Highness ;-) ) is more like it.

Not that that really helps with the "there's a Sammy Keyes song and I can't find it!" feeling, I know.

Let's just say that it is a lot of gluing and frustration.

Wait, Kylie, you're assembling it by hand? My sister made (monthly) calendars for the family for Christmas one year, but she just laid out the pictures on her computer (using a provided template), and then had a store print them out for her. Which still took a lot of time. I can't even imagine how much time you're spending.

My most time-intensive present was recording me reading the second Harry Potter book on a tape for my then-first-grader nephew (I had been babysitting him before and after school, and reading HP was the only way to get the boy out of bed, but I had to move suddenly partway through the second book). The worst part is that the tape volume was fine on my tape players, but he couldn't really hear it on his, so it didn't even work! I hope your project goes better.

This year, I'm making ornaments with my grandmother's picture for everyone in my family, but she was a quilter, and I'm "quilting" a picture frame (using paper), but it's tricky figuring out how big to make each little square (because they need equal spacing both horizontally and vertically, and I need the corners to line up). And then I have to cut them all out and arrange them in a pleasing pattern, then découpage the top to seal them. I'm sure the last several will be easy, but the first one is tough.

P.S. Kylie, that sounds like an awesome memory. Wendelin, I now have 4/21 penciled on my calendar as well (but peach season is a little later; it might be mulberry season, though -- and possibly pollen season, which is a wonder, though a nuisance -- the counts get into the 6000+).

I have done online ones for monthly calendars, bit they didn't have it for a daily calendar. I sent all my pictures to a company for them to print for me so the pictures looked nice. All I do is cute paper into 6x6 sizes glue the picture on, hole punch and date it. But after a few months it gets a little tiring.

Recording a Harry potter book sounds like a lot. Did you do it all in one day? Or split it up?

I spaced it out over a week or so, reading about 1 to 2 hours at a time. The official recording is 9 hours; I think I read a little faster, but it was still over 7 hours. I don't think I would have even tried had it been the fourth or later book!

Jessica, I think you should get the recording back. And what a sweet thing to have done.

Wow that was a lot of dedication. And it is such a sweet gift.