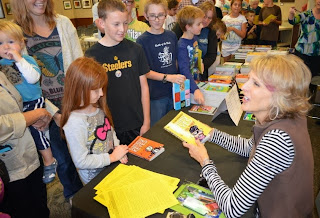 When I taught high school, I had a student with the last name of Borsch.

There was also a Keyes.

You get the picture.

I didn't fashion the characters after the students, I just lifted their names out of my grade book. It's a good source. Way better than 10,001 Names For Baby.

UNTIL I got published and my former students started hearing rumors about the names in the Sammy Keyes series.

That's when the questions (and the rumors) started.

And now that my former students have children of their own, well, I have some explaining to do.

"No! Officer Borsch is NOT your dad! Your dad was a good student. Very nice! He just happened to have a great name for that particular character. Did you know that borsch(t) is a type of soup? Made of beets? Usually served cold? With sour cream? No, really! Your dad never told you that?"

(Whose face is beet-red now?)

"And he's a great character! How far have you read? Oh, just through Sisters of Mercy? You have to read a few more books, but you'll see! He's one of the BEST characters in the series. I love Officer Borsch!"

At my talk at the "Santa Martina Public Library" I confessed that I was a little worried about the whole naming thing, but it turned out that none of my former students were there to call me out on that. They just wanted to say hi after so many years and have their kids meet me.

Plus they thought it was pretty cool that their names were in books translated into a whole bunch of foreign languages. Even if you can't read the language, you can pick out the names!

So overall, it was a big relief, and a wonderful experience. Still, it's probably a good thing that my grade book is closed for good.
Posted by Wendelin Van Draanen at 9:11 PM

All I can picture is one of their kids going to school and doing a book report on Sammy Keyes. When the teacher asked why they chose this book I can just picture them saying, "One of the characters was named after my Dad."

I can't believe that you were a high school teacher! I wish I had you as a teacher! I bet you were everyone's favorite!

The Beet Soup part had me busting up! I can just picture all of that in my head.

Have a great week everyone!

So the Beet Soup thing is really hilarious! And the beet red part, too!

Anyways, thank goodness I got the time being on here, though school's back on the list. *sigh*

Can't wait till winter break! Have a great week!

You must've been an awesome high school teacher! And I hear all kinds of names in my school, and school kids do have pretty interesting names sometimes. By the way, that's beet soup part of your post was really funny!
Hope everybody is having a good week!

Traditional names started getting odd spellings during my last couple of years of teaching. I remember looking at my roll sheet and seeing "Aarik" -- I'm like, ...what? And then I sounded it out: Eric.

That was about the same time that Taylor became used as a boy's name...and then almost immediately switched to a girl's name.

Yeah, I was pretty hyper for a teacher. And the funny thing is that when my first book came out my students (who only knew me as Mrs. Parsons) asked me, How'd you make THAT name up? I just told them, Blame my parents!

WAIT THEY KNEW YOU AS Mrs. PARSONS? I though you always just used "van Draanen"! I can't imagine... Wendelin Parsons or Wendelin van Parsons? I never put those together. It was always Mark Parsons and Wendelin van Draanen....

Every time Officer Borsch(t)'s face turned red, it cracked me up. I can't recall if you ever had him go "beet red" though. It really was the perfect name for him.

I guess it'd be pretty obvious that the character is nothing like them, though I'd wonder whether you secretly hated me if you'd named someone like Heather Acosta after me!

I saw this cool video about Afghan girl skaters, and I thought you guys might be interested in the work of Skateistan. I bet Sammy and Holly would love to go to a skate-school!

Hyper teachers were always my favorites!

Jessica, thanks for sharing the skating school with us, that is so neat. Sammy and Holly would have a blast. :-)

This week I have a story you all might enjoy!

I have this good friend from high school who's Jewish. We still live in the same place, but since November and December are really busy, we get to see each other a grand total of maybe once over the two months. So last year I started a tradition of sending her one envelope for each day of Hanukkah with a little something to make her smile.

SO for the fourth day of Hanukkah (Dec. 1), I mailed her a photocopy of the cookie scene from Justice Jack, ending with the first page of Chapter Three, and today I left a box of cookies on her porch (which, yes, is a day late, but we've been having Wind Chill Advisories here in Minnesota and you can't have Sinterklaas getting frostbite, now can you?).

So then on December first I get two text messages:

But who is the man who is not sinterklaas??? Ahhhhhhhh


(P.S. Wendelin I'm not sure that's technically "proper use," but I figured you wouldn't mind, especially once you heard the outcome :-) )