The Ugly Dirty Shredded Rubber Chicken (and a Book Giveaway) 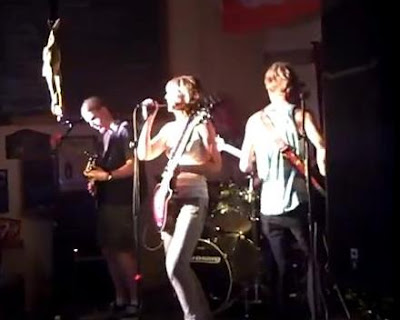 As those of you who follow my weekly postings know, last night was the Risky Whippet "concert."  I mentioned before that someone was threatening to record parts of it. They did. So I have a two minute YouTube link for you, which you will either find cool or ridiculous. Hey. It's rock and roll. Anyway, if you watch it you're bound to notice and eventually discern that that ugly yellow thing dangling from the ceiling in front of my face is a rubber chicken.
Yes, that's right--an ugly, dirty, shredded rubber chicken

So, you ask, what is an ugly, dirty, shredded rubber chicken doing dangling in front of the stage (by a chain, no less)?

And neither did Billy Pratt.

And yeah, I was wondering the same thing myself. It was gross and I really wanted to take it down. I mean, how was I supposed to concentrate on my hard-spun lyrics with a ugly rubber chicken dangling in front of my face?

The bar owner knew what I was thinking. "Don't touch the chicken," he growled at me. "Ya gotta work around the chicken. All bands do."

Of course I asked what the significance of the chicken was, and was told, basically, that it was good luck.

A dirty shredded rubber chicken hung by it's neck on a chain in front of your stage signifies good luck?

Mark knew I was about to pop off so he pulled me away and told me, Look, Wendelin. Just deal with the chicken.

So we set up our gear and rocked the house and I guess the chicken worked because everything went great. I even got a round of cheers when (to my younger son's chagrin) I introduced the band as our family and identified myself as "the mom."

"Yeah, Mom!" the chicken heads at the bar shouted.

Anyway, if you want to see the two minute "sampler" on YouTube and check out the dangling chicken for yourself, here's the link.

And now onto the reason most of you have tuned in to this week's blog babblings--the Sammy Keyes and the Night of Skulls giveaway contest.

Actually, it's not a contest. I did a contest last time. This time I'm just going to make it luck-based. (Influenced, I'm afraid, by the chicken.)

As (I hope) you know, there are going to be 18 books in the Sammy Keyes series, so simply pick a number between 1-18, inclusive, and send it, along with your name and mailing address, to mail@exercisetherighttoread.org  Put NIGHT OF SKULLS GUESS in the subject line.

This is NOT A RACE. You may send in your e-mail anytime between now and Saturday, October 8th. I'll go through the entries on Sunday the 9th and announce the answer during next week's post. I have three books to give away, so if more than three of you guess the correct number I'll either scare up more books or have a run off contest. The only hint I have about this number is that I like it. That's it.

So dangle an ugly rubber chicken in front of your face and send me a number!
Posted by Wendelin Van Draanen at 8:40 PM

Oh man. I'm glad I looked at this tonight. I needed a pick me up and you always crack me up. Love the clip and always love to hear what you have to say! I wish I could abandon my "jewel" vibe and rock out sometimes! Haha.

We need to talk soon! I miss talking to you so often! :) Glad you're doing well and getting out there!

....a rubber chicken? Really? I'm gonna have to watch that video! lol

Well that's so awesome!!! I am definitely going to enter!! :)

1. It looks like you guys have a TON of fun with rock 'n roll. Way to go on the concert! (did I see some high tops?)
2. I have a rubber chicken, but it's neither shredded nor hung by a chain. Maybe that's why it's never been a lucky chicken? My 8 month old daughter likes to chew on it--who needs a teething ring anyways?
3. I'm still chuckling over that dangling rubber chicken...how strange!

Well, your inner-rocker self was certainly rockin' the house for this concert. I always love to watch when you kick it into high-performance mode...no matter what the venue: a stage in a bar, a stage in a school, small-group discussions/writing workshops,etc. You are just so talented, energetic, and entertaining.

The rest of your band complement you so well. I love it when Connor gets the hair going. Colton makes the guitar talk, and Mark on the drums is just amazing.

No comments on the chicken except to say that the next time you visit Central you can bet there will be a rubber chicken to greet you.

hey wendilin,
i'm not sure if i can email the entry ( i'll try ) but i was wondering, if i could submit the number here ;)
- thanks

Wow a rubber chicken? Wish I could have heard the story behind that. :) A number between 1 and 18? How is one supposed to pick???

I already sent my email to enter (though I had to send it twice since I made an error when I sent it off. I always make the most stupid mistakes xD)

Can I borrow your voice? Just for next Tuesday? I have theater auditions next week and I have to sing and act. They say that they'll ask you to join if you can act. LIES. THEY WANT SINGERS. Ah well. I'll go buy a rubber chicken and bring it with me.

I must think long and hard about the number...I must get it...psshhaw watch me be waaaay off.

I feel bad for the rubber chicken. No one wants to be hung on a string like that. :( Poor rubber chicken. Other than that, I'm PUMPED for the next Sammy Keyes book!!!! That was pretty epic on the rock 'n roll there. :)

ok well i sent an email please tell me if you got it ;)

I really liked the clip, you and your family are so cool!
And I'm so glad that SK 14 will come out soon!
I hope you have a great week!

How many times can we enter??

Hm. I left a comment but it didn't post--so I'll try again! The e-mails are definitely coming through, no worries! And those of you who forgot to include your info and sent it later, I've got it together, so no worries there, either! Please enter only once, 'cause otherwise you could enter all the numbers, right? So I'm just taking the first entry per person. Thanks for the laughs and the comments and the e-mails!

I've entered!
I'm going to get my sister to enter of that's okay.
We're both huge SK fans!(:

I just read the first chapter of Night of Skulls.
OMG.
Ms. Van Draanen..
MIRACLE WORKER EXTRAORDINARE.
Oh, and also, I sing too, and I would SO not be able to sing with a chicken dangling there.
Why don't they put the "good luck" somewhere else? Like, I dunno, BEHIND the singer?
Cool. Real cool.
But it made me laugh because that's so random, lol.
Xoxo
Steph

Has someone guessed the right number yet! And if no one does get it then what??