And The Winning Number Is... 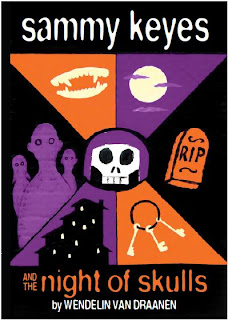 Well, it is NOT thirteen. Sorry to the over thirty of you who guessed that number, but pfew to me, because I would have had to have a run off and would feel bad about not being able to send each of you a book.
I liked the explanation some of you sent regarding why 13 was your choice--especially the ones that referred to Sammy's recurring age.

So thirteen was the most frequently guessed number, followed by seven, which is also not The Number.

Interesting that the two numbers guessed most were the "lucky" number and the "unlucky" number.

The numbers NOBODY guessed were one and three.

Fortunately, neither was The Number.

Although three was a contender.

And a lot of you also guessed four, and your explanation was based on the first four books and the last four books...I really liked that.

But the winning number was also not four, sorry.

So, good grief, why don't I tell you already?

Yeah, sorry. I know--you've been waiting all week.

Cutting to the chase: the winning number is nine.

There were five correct guesses, but two of them did not include mailing addresses. Sigh. What am I supposed to do with you? The instructions were really clear and really easy. And I have three books to give away. Five minus two-with-no-addresses equals three.
Okay, right now The Nines are freaking out. Did I send my address?! Please! I was just excited!
Yeah, yeah, I know. And I like that you're excited. And maybe a little forgetful. It reminds me of my mad scientist son. So fine. I'll e-mail you back and the subject will be HEY SPACE CASE!- and if you e-mail me your address, I'll scare up a book for you.
Boo!
Congratulations to those of you who won--if you sent me your address I'll autograph your book and get it in the mail tomorrow. And thank you to everyone who submitted a guess, and especially for the nice comments you included. I wish you could all have won a book! Maybe we'll do this again in May when Sammy Keyes and the Power of Justice Jack comes out.
Whether you won or not, I hope you enjoy Night of Skulls (which comes out on Tuesday).

See you next Sunday!
Posted by Wendelin Van Draanen at 3:27 PM

So unbelievably excited for the book......... I preordered mine a month ago. :D

Anyone expecting the new Jacky Faber or The Son of Neptune??? Very exciting......... Also preordered a month ago, I will (hopefully) get it Tuesday. :D

Congrats to all of you who won! Hope you enjoy the book :)

I mentally submitted an 8 just because I'm partial to that number. No particular reason, though. *shrug* =)

I tend to like prime numbers as well, so 1 and 3 would certainly have been considerations for me. Along with 5, 11 and 17. (I wouldn't include 7 or 13 for reasons below...) Three has the added advantage of being the first digit in PI, which I'm also partial towards. =)

I find this little experiment interesting, though. I figured 7 and 13 would be the "obvious" choices--and perhaps would get a lot of picks because of that. Or maybe *none* at all if everyone else also thought those choices were "obvious" and deliberately chose something else as a result. Guess not! So I figured those would either get a LOT of votes or none at all, but couldn't decided which way I thought it would fall.

Four is considered an unlucky number in Chinese because it's pronounced "si" which is similar to the Chinese word for "death." Allegedly, casinos in Las Vegas don't use that number to cater to their Chinese guests--just like most hotels skip the 13th floor. I haven't looked to verify that claim, though! Did you happen to notice when you were doing "research" there? =)

Nine is a good, solid number, though, and it most noteworthy for not being prime! =)

But I only submitted mental guesses--we already have a few autographed books from you now! Figured it's time to let others enjoy these. =) And anyhow, I happened to notice that there's a display at the Barnes and Noble in SLO with TONS of your autographed books the last time I was there! I know where to find them. ;o)

Mental Note: Gotta get on over to the bookstore on Tuesday!!

Ah, so close and yet so far. I picked 8. Too bad. My consolation prize? New Sammy Keyes book on Tuesday!!! Can't wait!!!

Ha ha! I think I guessed wrong AND forgot to send my address! Well now I can pre-order my book. It won't be a signed copy, but I'm pretty sure that the story will still be good. :) You actually visited my younger brother's school about...9 or 10 years ago in Jackson, TN, and you signed 2 of his Sammy books. Now that he's 19 and off to see the world, he bequeathed me his Sammy collection. Thank goodness he did, because our teeeeeeny tiny library only has 7 or 8 of the books!

DARNIT.
D;
I chose 16...I'm excited!
I asked my sister to join the contest but that didn't happen. );
Congrats to the winners,I can't wait for the book (:

Holy crap, when did it become October?!?!? SK AND THE NIGHT OF SKULLS IS COMING OUT!!! I DIDN'T REALIZE IT WAS SO SOON! Two months of college have passed by... how the heck did that happen? Just a couple months ago I was counting the days, and now it has snuck up on me. Well I'm getting a ride to a bookstore this week or I'll go nutso. As if I wasn't already xD. Thanks for hosting this contest/drawing/whatchamacallit, and congrats to all the winners! :D

YAY!!! keep workin' hard! we are all supporting you Wendelin!

Hey, why doesnt Barnes and Nobles sell sammy Keyes? They dont even have the new ones come in on the day. THIS SUCKS. I literally drove there for nothing, then. Um. I had to order it. I was just wondering because B&N is like one of the only 2 majjor booksellers, so I thought maybe Sammy Keyes should be sold there. I have to wait until Saturday. :(( xoxo

YAAAAY! I just finished reading sammy keyes and the night of skulls and LOVED it just as much as all the other books. Thanks for making such enjoyable books (^__^)

Waaaaaaaaaaaaaat!!!! u finished it? awww man i want to really read it now!

I just got my pre-ordered copy, and I'm really enjoying it. But I wanted to let you (and by extension, your publisher) know that there's a misprint on pages 106 and 107.

(I'm really excited about that, actually. I've never gotten a misprint before!)

NOoooooo! Not a misprint...and two? After ALL THE TIMES we went over it? Please be wrong!

A sentence at the bottom of page 106 is repeated at the top of 107.
So you get to read a line from the story twice. No big deal. I was so caught up in the back and forth between Billy's and Casey's funny alliterations to describe the dead that I didn't notice. I've read many young adult books with major mistakes (grammar, sentence structure, words left out,pages duplicated or missing etc.). This book has no issues like that.

Oh, yes, not a terrible misprint at all! Just a repeated sentence.

Anyway, I finished, and it was a lovely book, which is way more important. Thank you for it; I enjoyed it a lot.

yeah i noticed the double sentence thing as well. But it isn't a super big deal :) loved the book!

*possible spoiler alerts if you haven't read the whole thing!!*

I loved how Casey and Sammy didn't act different just because they're finally together - their interactions were pretty much the same with a few extra kisses thrown in and I thought that was a good way of handling their new relationship :) The Billy/Marissa development is great too, I've never thought about them being together before this book but now I can see it happening! The mystery was interesting this time around as well and things I seemingly thought weren't going to add to the story in the beginning ended up being really crucial! I enjoyed that I didn't know who would be guilty until the very end. I liked the return of Elyssa as well :) Already can't wait for book 15!

Oh gosh...I shou;dn't hve scrolled to the bottom of the comments. I caught a couple of spoilers. Slly postal service and their slowness in delivering book. I read the free chapter and a half on Nook PC Reader. Ah, well. Take what you can get.

I shouldn't have guessed 13! It seemed so obvious that no one would guess it...? Haha. Cannot wait to read Night of Skulls. See you in three days!

I'm actually crying right now. ;( REAL TEARS.
Basically, Barnes and Noble said it would be sent in a long time ago but its been a long time and it keeps being delayed, and I've been waiting all week long for it, and I've been trying to have some sort of self-control and act cool about this,
BUT TODAY I HAVE LOST IT.
This is literal proof: http://xxtellmeimawreckxx.blogspot.com/2011/10/aaaaaaaaaaaaaaaaaaaaaaaaaaaaaahhhhhhhhh.html
I would totally drive to B&N myself right now, but my mom took my car and is out buying bathtubs for the new house and
I AM SO SAD.
WENDELIN VAN DRAANEN I AM REALLY SAD I REALLY WANT TO READ YOUR NEW SAMMY KEYES BOOK REALLY BUT THE BOOKSTORE WONT. IT JUST.
I should leave before I crack and have another meltdown like I did in that "AHHH" post.
Okay.

Okay, I read it.
That was ab ook of epic proportions.
I can thank my mom for driving all around town to find me this book, harassing the people at the Oakbrook B&N to go in their room thing and find it for me.
THANKS FOR THE AWESOME BOOK.
Next one comes out when?
OMG.
xoxo

It seems like everyone but me has read this book >.<"
I NEED ITTTTT!
I'm dying here D:

Epic proportions! Yes! Thank you all for the great comments. And I've alerted RH to the error. At least it was obviously a mechanical error (and not something embarrassing or stupid.)

Answer: Justice Jack comes out in May! Wow, that's quick! Maybe that's why I've been working so hard...

May?! I'm so excited for it right now <3 I just finished Night of Skulls (took me forever to get it since I couldn't get a ride to B&N) It is amazing! I laughed sooo much and I almost cried a few times >> I love how the plots intertwined. I literally felt like a psycho while reading this because I was so loud in my reactions xD

p.s: sammy keyes and the night of skulls was........ AMAZING!!!!!!!!!!!!!!!! i was shocked at how things took a turn, especially w/ danny and marissa and billy (and sammy and casey!) but i had to remind myself that (sniff sniff) our characters are growing up! :) :( i imagine in my insane and wild fantasy that sammy and casey get married one day......... shoot, i'd marry a guy like casey! he's so sweet and compassionate and understanding and everything a girl could wish for in a guy...... (happy, dreamy sigh) :D