Let The Son Shine In! 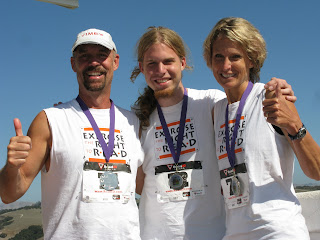 My sons are both awesome, but today was Colton's day. He's been training for months to run his first marathon, and today was the big day. Mark and I trained with him.-how else is a college student going to get up every Saturday at 6:00 AM to go for the week's "long run" -- a distance that stretches up to 20 miles a few weeks before "race day"?
He confessed today that he "tapererd early." Meaning that for the past two weeks, instead of reducing his mid-week runs like the schedule dictated, he just didn't do them.

Also, the carbo-loading he did this past week at his dorm included eating an entire box of Captain Crunch, another of Cocoa Puffs, and another of Honey Bunches of Oats.

Not smart. Especially when you need to keep your intestines...uh...streamlined.

Anyway, today proved (once again) that attitude is everything. Colton's super smart (although he did not apply his intelligence to his marathon prep this past week), and really, really nice. He may look like a shred metal guitar player (because he is) but he has got to be one of the kindest, gentlest people on this planet.

He's also got this wonderful enthusiasm for certain things, and today that shone through in a big way. "This is gonna be fun," he kept saying.when we got him out of bed at 5:30 this morning, and he continued to say it all the way to the starting line.

You think so, I thought to myself, because you've never done a marathon. They hurt. A lot. Why am I doing this again? Who's stupid idea was this? Oh,yeah. Yours.

Then off we went, me keeping the pace because we'd agreed to run as a family and I am the undisputed boat anchor. At mile eight Colton's still yammering. Wow, look at this scenery! (It was beautiful.) Wow! This is so much fun! (No comment.) Thank you SO much for doing this with me. This is the best time I've had in ages! (Poor, poor you.)

At mile 20 he's still excited, but when I ask him how he can still have so much energy, he tells me that he's just trying to keep a positive attitude. Then he says, "I didn't hit the wall like I did in training. Did you hit the wall!" (Yeah, about eight miles ago.) "I was sort of  looking forward to hitting the wall so I could really see what it's like to go inside my mind and pull up my reserves."

Yup, attitude is everything.

Still. At Mile 22 I'm completely wilted. The sun has broken through and is baking me into the asphalt. My feet are blistered and my intestines are duking it out, making me nauseous. (Maybe I should have had some Captain Crunch.) And then Colton suddenly charges ahead and then scrambles up a steep embankment onto a field.

Mark just shakes his head. "I have no idea."

"Wow, that was really stupid," Colton says when he joins us again. "I was just seeing what I still had in me, but I think I'm going to fall over now."

Mark and I just shake our heads at him. But Colton's still staying positive, acting like he's actually pleased to have legs of lead. "Are yours sore, Mom?" (Thud-thud-thud.) "Because my legs are whoa! Jelly!"

When we finally crossed the finish line at 26.2 miles and Colton got his first marathon medal slung around his neck, he turned and thanked me for being the pace keeper. "I'd have been sprinting and walking if it wasn't for you." And when I tried to apologize for slowing him down he said, "Are you kidding? I couldn't have done this any faster."

I know there are lots of things I should be updating about Sammy Keyes, but they'll have to wait a week. This post is dedicated to Colton--an inspiring human being, and an an awesome son.
Posted by Wendelin Van Draanen at 7:12 PM

Insane is all I have to say. I am no runner and running over twenty miles...wow. I try to think how far that would be from my house to whatever familiar place and I can just say I'm glad I'm not in your running shoes :-) Congratulations to all of you and great job Colton!

I thought you might be interested in reading a few posting that where written about your Sammy Keyes Series, along with mentions of some of your other stand-alone books.

I hope you enjoy them and that everything is accurate.

All I can say is wow. I love that you dedicated this entry to your son the week your new book comes out. Such an awesome story aout you and your family. Thanks for sharing that in the midst of all the excitement with Night of Skulls. Congrats to all of you, especially Colton!

Okay, Colton sounds super awesome and super funny.
I wish I could just meet your whole family.
You should have a book signing/book tour thing where you bring your whole family along.
I can just imagine you about to die, and your son going "Wow, would you look at that nice-looking tree over there? That is some beaut of a tree!"
I wish Colton was my older brother.

Sorry, but I'm commenting again because I just noticed the irony of your post title!
Let the SON shine. Like, son, your child, aka Colton. Which is what this post is about.
Okay, I'm done.

I could never run 26 miles. Which is kind of funny, because I have *hiked* well over 30 miles in a single day with a heavy pack on, but to RUN that distance? I'm so not a runner.... I'd poop out after a quarter mile, most. =)

Good job to all!

Aww, such a sweet post. Your son sounds super awesome. You must be really proud. Glad you powered through the marathon!

Geeze, over twenty miles? I don't think I could run anywhere close to that. I doubt I could even walk that haha. Congrats to all of you! :)

Hurray! Good job on the marathon! I have run just one. And it was awful. So naturally I have to do another one just to make sure... since I was pregnant during my first marathon, I've convinced myself that it will be much better/easier to run 26.2 miles without the extra weight of a little zygote. We'll see.
Anyways, I think it's so cool that your FAMILY could do a marathon together. Marathons are emotional events, so it must've been fun to share it together! :)

DANG! 26.2 miles. During Cross Country practice, I just about died at the half-mile point (which is wierd cuz I can run my PE miles just fine). Well, congrats to ur son!

You're so pretty, Wendelin!