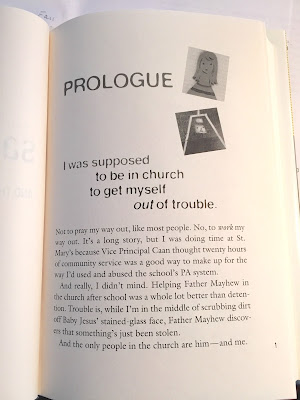 Last week I shared the new outsides of the Sammy Keyes series. This week we look inside.

There's a lot that goes into the interior design of a book. A lot more than you might think. There are decisions regarding font, point size, margins, chapter headings, as well as little style touches.

In the case of the Sammy Keyes series, the interior style is pretty basic. Each of the 18 books begins with the word Prologue, followed by an enlarged point size and offset first sentence. These, as well as each chapter heading, are set in the same font that's used on the book covers: Expose.

There are bits of art from the cover design inserted sparsely throughout the book--usually to accentuate the beginning or end of a chapter--but the rest of each volume is simply text.

Those design choices resulted in an integrated look for the hardcovers. When the paperback covers started getting different artwork the designers bridged the looks by continuing to use the Expose font on the covers. Expose was the "Sammy Keyes font." 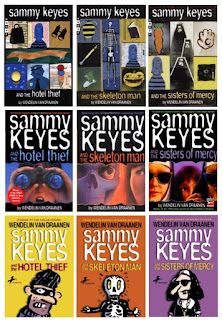 So the interior chapter headings and opening sentences still made sense, but once they moved away from the original art, the bits of art that echoed the hardcover jackets did not. Readers who'd only seen the paperbacks wouldn't understand the odd squares of different art, so why weren't they removed?

I asked, but the answer was kind of vague, and it didn't seem that crucial, so I just let it go.

But as the series progressed, some of the inserted squares of art in the interiors of new hardcover editions looked murky. Some were almost unrecognizable as art.

I was told they just weren't printing clearly on the paper that was now being used. That situation coupled with the weirdness of having the squares in the paperback pages led to the logical decision to stop adding them to the interior pages in upcoming titles. That is why, from Wedding Crasher (book 13) on, the bits of art no longer appeared past the Prologue page.

This all relates to the new look in that the new paperback covers do not use Expose. After much discussion about the pros and cons, the design team decided they wanted to rebrand the whole series with a completely fresh look.

And yet, when I mentioned updating the interiors so that all the old art bits were removed and the chapter headings and opening lines were no longer in Expose, I got some worrisome news: They maybe, probably, couldn't do that.

Nancy (my editor) explained that the first books in the series were originated long enough ago that there were no digital files; the pages were on actual film, like negatives, and so it would be cost-prohibitive (and way too much work) to regenerate the books digitally.

She gave me a little glimmer of hope, though, saying they would approach a different printer to see if there was any way around the situation.

This maybe-probably-not impacted more than just the style of the interior. It threw a monkey wrench into a decision I've been agonizing over for a couple of years: Should I take this opportunity to gently address text that might make the series seem dated? If interior changes were impossible, that option was off the table.

Fans of the series will recognize how important a decision to-tweak or not-to-tweak the text is. It has been truly agonizing! And I do plan to tell you all about it, but sharing that decision and the rationale behind it will make this post much too long.

Also, it's an ongoing, evolving situation.

So I'm afraid I'm leaving you with...

Sorry, no peeking ahead possible. The story will continue next week. (And I will finish, but bring your flashlight - it may be a long night.)

Until then, thank you for stopping by. See you in the comments!
Posted by Wendelin Van Draanen at 4:18 PM

No, not a cliffhanger! This is why I waited until today to read Lincoln Jones... which was amazing, by the way. It might be your best book yet, and since you know how much The Running Dream meant to me personally, you know that's really saying something.

Anyway, back to the topic at hand... I hope the other printer worked out so you could fix both the look and the minor story things you wanted to fix. I actually thought there was something you should have included in earlier books after reading Sin City... I don't think I've shared it yet because I didn't want to spoil anything for other readers. I guess I won't share it now unless you'd like me to...

*hangs on tenterhooks for the next week*

I really enjoy and appreciate how you're sharing these behind-the-scenes details with us... but oh no, a cliffhanger! Oh well, you are an author, so I guess cliffhangers are a must. :D

Off the top of my head, I can't remember anything terribly dated in the books, and what's nice about Sammy is she doesn't really have much access to technology, so there isn't much to worry about there. If you do end up changing things, though, it definitely would be interesting to compare the different versions.

I'm not a professional author or anything, but I do write a whole lot for fun--mostly journal-ish posts on the family blog--but I can see how the decision to tweak would be simultaneously tempting and agonizing. My journaling side balks at changing anything that was written previously because that entry is a specific piece of history and every mistake makes it PART of the day I wrote it. A long-published book feels the same way! But...not all the way! I can see how it would be so nice to be able to go back and nudge a few bits into better alignment. Good luck with that tough call! I don't envy that decision. I too find these backstage passes you've been posting fascinating. Thanks for sharing!

The only dated thing I can think about is Sammy buying a CD player in Cold Hard Cash and I don't really see that as dates seeing as for Christmas a few years ago by nephews all got CD players because they are cheaper than iPod and they were just getting them for the music. Plus (if I am recalling it correctly) doesn't the most recent books feature social media? After Sin City wasn't Heather posting online all about their time in Vegas?

I hope it all works out! Can't wait to hear more about it! I loved all the artwork in the books, it is something that I feel is very unique to Sammy Keyes and I don't see a lot of books doing it. Thanks for telling us all about this!

I hope everyone has a wonderful week!

Loving the comments and am tempted to explain further here, but it will be better (and more cohesive) if I save it for the next post. Looking forward to sharing more! Hope you are all having a great week so far!