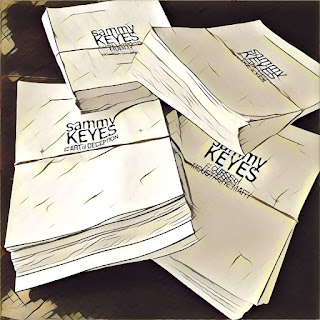 Any series writer will tell you - tech is a headache. You can't keep up with it or predict how long a current trend or innovation will be relevant. (Which, I suspect, is the reason we're seeing so many books set in eras prior to the tech explosion.)

Also, cell phones are the bane of a mystery writer's plotting. There is no longer a believable excuse for not taking the picture, not recording the conversation, not texting your location from the trunk of a bad guy's car. And having the cell phone break or die or get forgotten is desperate plotting. Cell phones take the fun and creative solutions out of contemporary mystery writing. Everything can be traced. And really, how exciting are texts? Not exactly the stuff page-turners are made of.

I remember reading about Sue Grafton's decision to keep her alphabet series set in the 80's. She began that series in 1982, which is when the first book (A is for Alibi) takes place, and the entire series is dedicated to that decade's style and technology. This seems right for that series. It fits.

I purposely didn't do that with Sammy Keyes. The readership window is so much smaller when writing for youth than it is when writing for adults, so even though Sammy grows up a month at a time from one book to the next, I never specified a year. I also did what I could to avoid describing things in a way that might date the stories too quickly. I wanted my readers to feel like Sammy's world was their world.

But tech can trip you up! For example, during the writing of the early books I remember the price of a pay phone was going up again. It had been rising steadily and was on its way to fifty cents per call. So when Sammy uses a pay phone, I thought I'd be smart and have her insert "coins" instead of a specific amount. I wasn't imagining a time just a few short years later when pay phones would be nearly obsolete.

Also, as time ticked along behind the creation of the series, I adapted as I went. I worked at being subtle, introducing new tech and modernization casually. I wanted the book to feel relevant in the year it was released. Fortunately (!) Sammy lives in an old highrise full of old people; a place with shoddy maintenance and inattentive management. Also, Sammy's grandmother is on a fixed income, and Sammy has all sorts of legitimate excuses for not have access to technology.

Outside the highrise, though, tech happened. And with the opportunity to revisit the text while the books were getting an updated look, I weighed the pros and cons of making some subtle changes so that new readers (yes, a new generation of readers) wouldn't be thrown by things they'd never heard of.

After much discussion at home and some with Nancy (my editor), I decided to dip into the pages of Hotel Thief--the oldest title--and see how difficult (or, even, possible) gentle updating would be.

I will take a little sidetrack to share that I have never read a Sammy after it was published. I've read each and every one dozens of times during the revision process prior to publication, but once they became real books, I just didn't want to. Mostly that was because I knew I couldn't read them for pleasure. I would always be finding places I should have done or worded or said something differently. 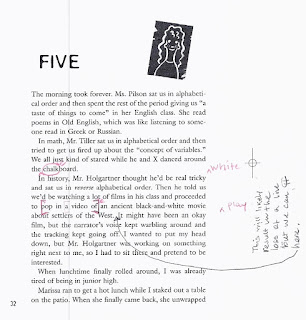 So it was with a certain amount of trepidation that I revisited Hotel Thief after nearly twenty years.

But you know what?

And I was so relieved to feel that way about it!

You know what else?

To my surprise, it didn't take much tweaking.

So to finally end last week's cliffhanger, yes, I did it. I went through the pages, subtly excised, carefully added, but didn't change one single thing that didn't meet my reasons for what I was doing.

Not changing optional things was actually hard. There were places I wanted to pull out filler phrases ("Now"s and such). And there were places where the switch in tense could have been done better. Lots of places. But I didn't touch them. Not any of them. 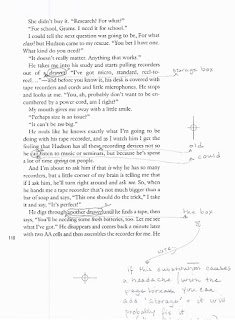 Encouraged, I went on and revisited Skeleton Man and Sisters of Mercy - the other titles set for re-release in May. In the end, each title had only about ten pages where little changes had been made - surprisingly little! But some of those changes took me hours to finesse, because I had to keep the line (or, sometimes, character) count the same. If I cut or added too much it might pull (or push) the length of the paragraph, which would then affect the page breaks--something I had to avoid.

When I'd completed the manuscripts, I made copies of the changed pages and sent them off to Nancy, certain that this was the right course of action.

And then I got some bad news. As it turned out, the older titles were on film. Changes might be impossible. Here's the news, directly from Nancy: It’s ironic that the earliest books will have the most tech things to change but the corrections will be the hardest to make because the printing technology has changed… .  It would be easy to make changes to the final books in the series because they’re all digital files, but on those we probably have the fewest corrections…

At this point I was seriously invested so I did a little (well, yes, more than a little) pleading. This didn't fall on deaf ears because Nancy was invested, too. After all, she's been the one and only editor of all 18 books and she's the one shepherding the reissue through this whole arduous process. 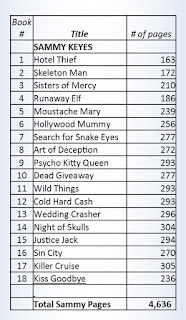 And the good news is, they have found a printer who is able to do the changes. To celebrate, Nancy sent me Runaway Elf (#4) to work on, and the next 4 titles arrived in a box yesterday. So you know what I'll be doing for the next many weeks!

I'll leave you with this graphic of the titles with their page count (and total pages for the series), to drive home that yes, this is a lot of work, and yes, it would have been much easier to just leave the text alone.

So if you're a purist and disagree with my touching the text, I hope you'll be reassured by the examples I've included. Changes are being done with the lightest touch, and with the sole purpose of keeping Sammy and her feisty, funny ways infiltrating the hearts of readers, (and spreading girl power!) for years to come.

Thanks, as always, for making time to visit. Looking forward to seeing you in the comments!
Posted by Wendelin Van Draanen at 5:53 PM

This was fascinating to read! First of all, though it's understandable, it's still amazing that you haven't read any of the Sammy books after sending them off. When you reread Hotel Thief, and found it very strong and very entertaining, I hope you thought, "I guess everyone is right - these books ARE wonderful!" That's so interesting how you're subtly updating the books, and that you have very specific parameters for how you want to do it, and how you can do it. Can I ask - why does the word "drawer" warrant a change to "storage box"? So excited for the first set of books in May!

Great insight and information, Wendelin. I've been struggling with that as I revise an old (favorite and unsold) screenplay. Glad to know I'm not the only one facing the curse of tech advances. Be well. And congratulations on the re-launch of your series.

MarqueeMovies: Thank you! And yes, I'm trying to be VERY subtle. So subtle you can't figure out what I'm doing :-) The "drawer" to "storage box" signaled the boxing up of unused technology. You don't have something within reach if replacement technology is so accessible (like recording with your phone). So that's why I did that!

Thanks, Peter! It's nice to have your company with this :-) Good luck with your revision. I saw you've gone offline for Lent, so I hope you're getting a lot done!

This is very interesting. Thank you for sharing. I see how subtle the changes are, and I appreciate why you have chosen to make them. However, as someone who has been cycling through Sammy non-stop for three years, I can tell you that the small examples of outdated tech are soooo not an issue at all for me or my eleven year old. Your themes are universal and timeless. A pay phone here and there doesn't diminish the wonderful storytelling in the least.

This is the kind of stuff that I love to hear about. So amazing!! The work that is required, and I often read Sue Grafton and I think of her plan to keep it retro even though everything was evolving so fast around her. Makes it easier for her really. And of course the real thing IS the story. And the details can mean so much, especially to fans.

Amanda - that's so true about the real thing being the story. No amount of updating is going to save a story that doesn't stand up, regardless of aspects that might date it. This "update" was optional for me - my publisher didn't ask me to do it - but I didn't want little things to jolt new (young) readers out of the story. What I've learned is that it's wise avoid current cultural references, as much as possible, and that it turned out to be fortuitous that Sammy is a thrift store kid. Didn't see the long-term benefit to that, but it's turned out to be very helpful.