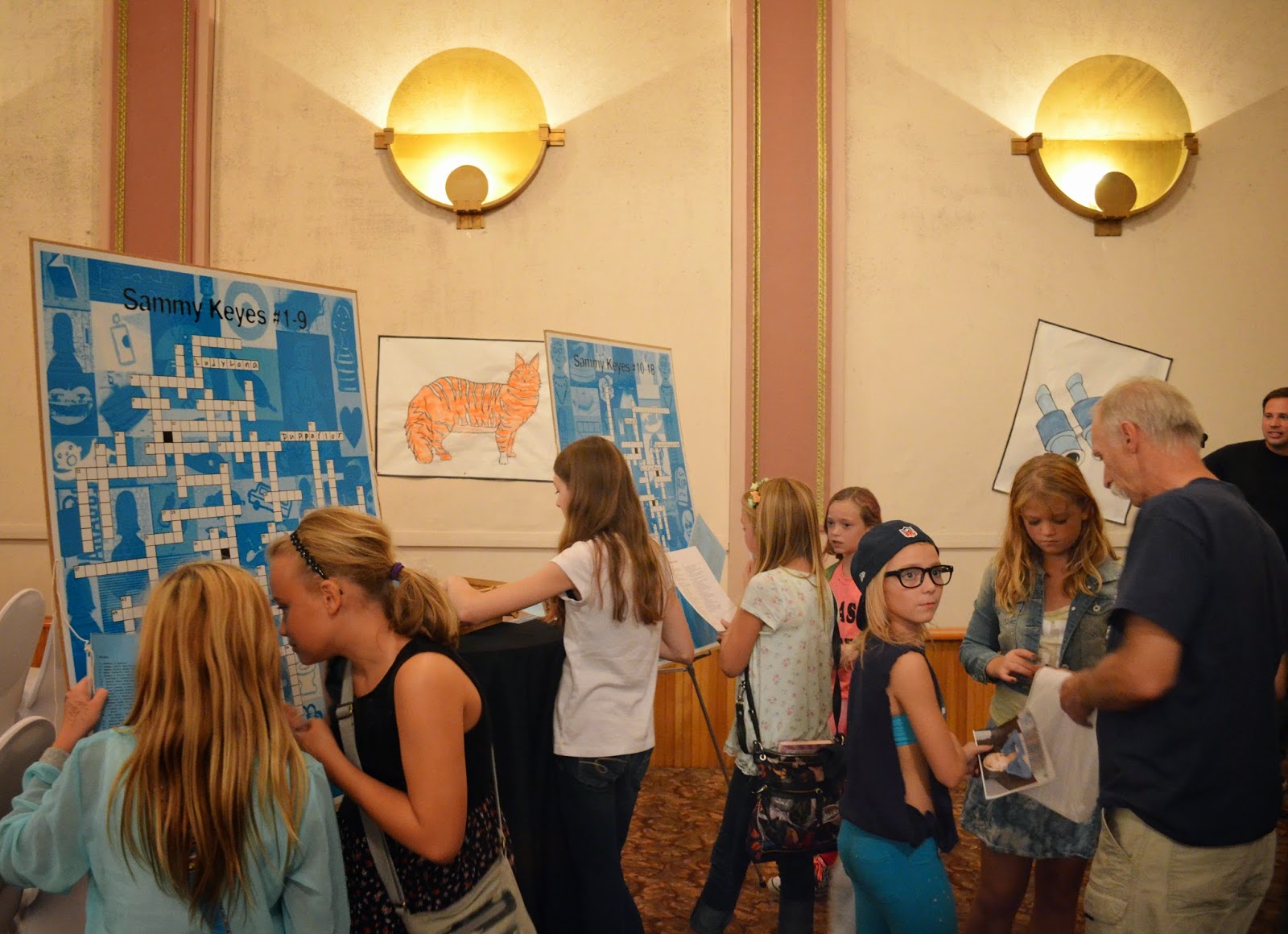 Big apologies for being over a week late with this. My PC blue-screened me, and I have been struggling to get coordinated with a new system -- the pictures have been the big problem. But here are a few from the party, and a little summary.

I still almost don't know where to start because the whole evening was like the coolest dream ever. An enormous amount of planning went into the event. We contributed what we could, but the Puyallup Library staff pulled off a night I'll never forget--full of surprises and such good energy that I know nothing could possibly top it.

We arrived at the Liberty Theater about an hour before the doors were supposed to open so we (the family band, Risky Whippet) could run through the 6 songs we were going to perform with some first-time Whippettes (who included editor Nancy, agent Ginger, RH sales rep Deanna, and seasoned Whippette and friend Carol).

The evening's house band (whose bass drum sported a Darren Cole & the Troublemakers logo) was running behind with their setup, so we went to an upstairs room where we ran through the set acoustically one time. That's all the back-up team got--but they did great when the boas and sunglasses went on and lights came up!

First, though, there was the filing in of hundreds of people, the guest book sign-in, the Sammy Keyes puzzle doing, and the handing out of free books to those sporting Sammy-style shoes....

A sort of mid-stream photo shoot with me and guests happened organically. Some have been uploaded to the Sammy Keyes Books facebook page (where we hope more pictures will appear before too long..)

After meeting people and mingling for a while, the library director, Tim Wadham, got up and made some introductions, and then it was time to see the Sammy Keyes documentary.

I wish I could tell you everything about the documentary, but it felt kind of like a dream, and then it was over. Some of the people we videoed during the Southern Loop of the tour were in it. (We sent them the footage and they used some of it, which was so cool.) It was like seeing friends pop up unexpectedly to say hi. My understanding is that some of the video they took at the party will be added to the documentary for the final cut. I'll keep you posted on the wheres and whens of being able to see it. Not sure right now! 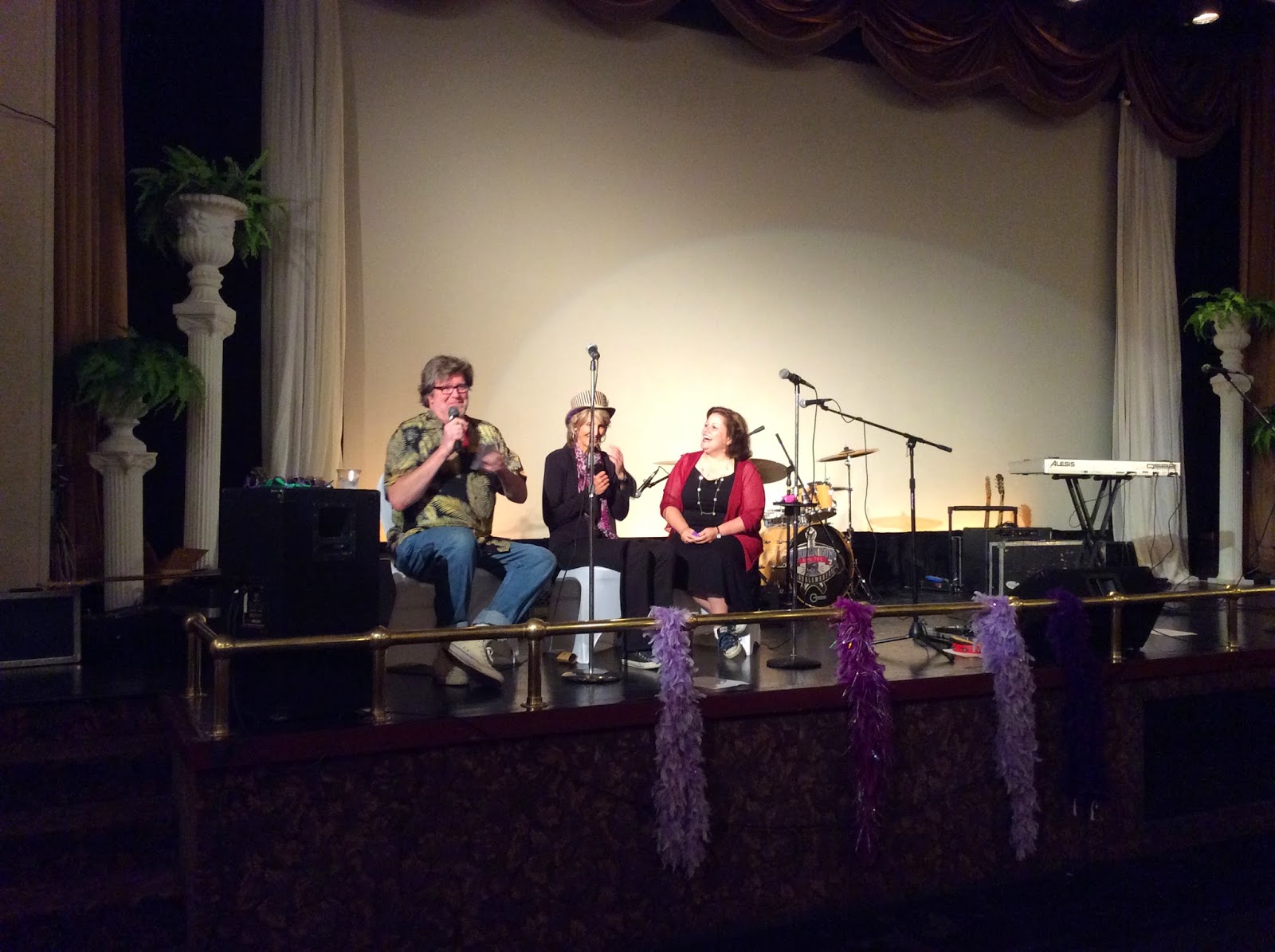 After the documentary came the interview, which was conducted by a man who really is larger than life. His name is Walter Mayes and he has a personality and heart to match his six-and-a-half foot frame. I met him at a function in...maybe San Diego?...when I was a brand new author. I was by myself at some social thing and he came booming up to me with an enthusiasm that made me want to hold on and not let go. He gushed about How I Survived Being A Girl and was just so warm and effusive. He has a long history inside publishing and once you meet him, you don't forget him. He goes by Walter-the-Giant-Storyteller and he did a story time for little kids at the Puyallup Library the morning before the Sammy Keyes Party, which we adults all attended and loved. He did voices and sang and projected enthusiasm across the expansive library, and Mark and I are still singing his version of Wombat Stew.

Anyway, many months ago Tim arranged for Walter to be the MC at the party, and Walter conducted an onstage interview with Nancy and me which included a booming (and quite adorable) rant about why he was refusing to read the last Sammy Keyes book. (NO! I REFUSE! IT CANNOT END!) 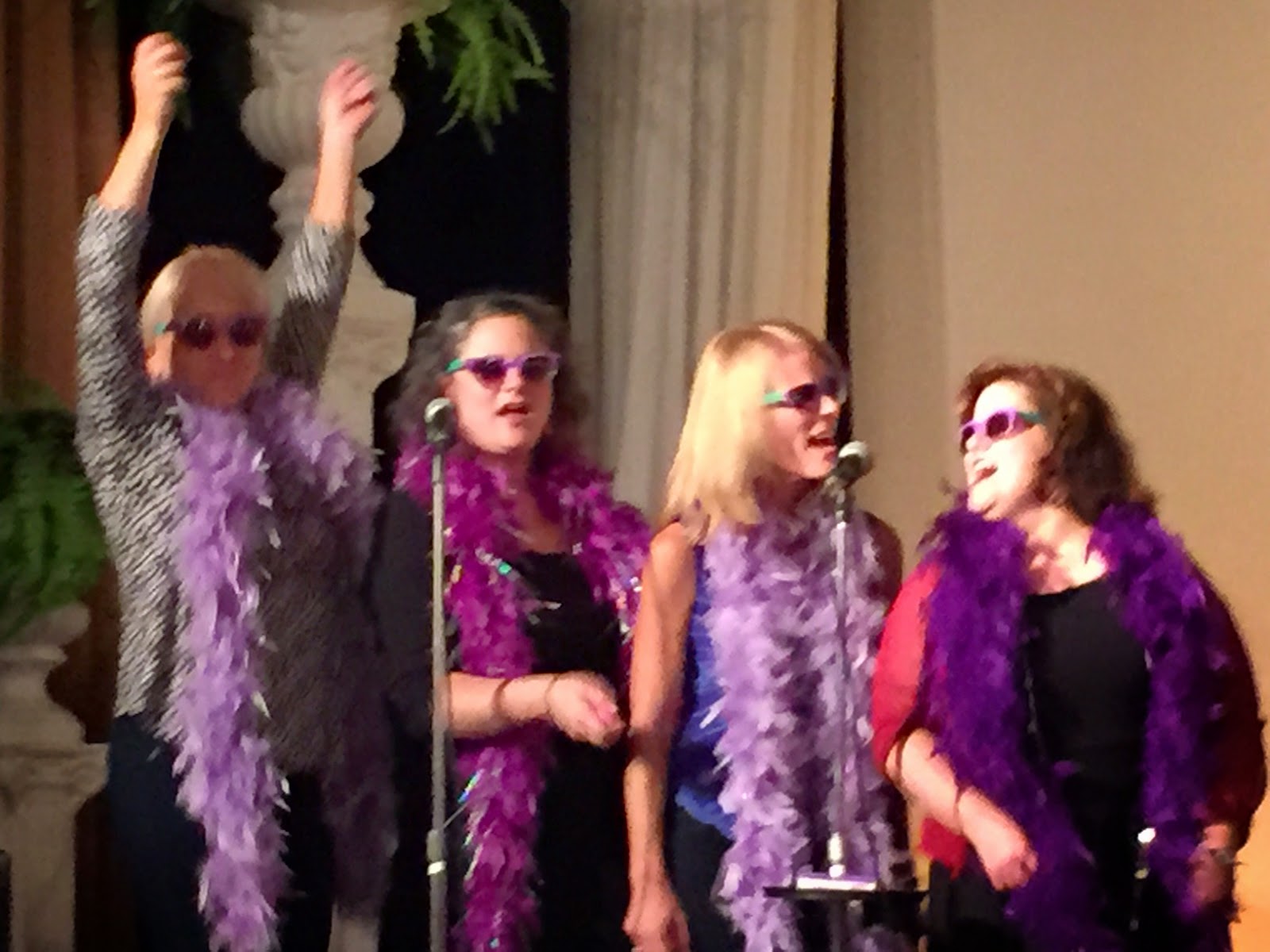 After that, it was time for Risky Whippet and the NY Whippettes to get up and make some noise. It didn’t take but a song for the boas to be swaying and “my girls” to be having some fun. The songs we did were:
Knock on Wood (dedicated to Sammiacs)
Chain of Fools (the Marissa and Danny song)
Birthday (Beatles' version, for birthday people—I had a picture in my head of a bunch of birthday people jamming around onstage with us, but the kids that came up were mostly terrified.) 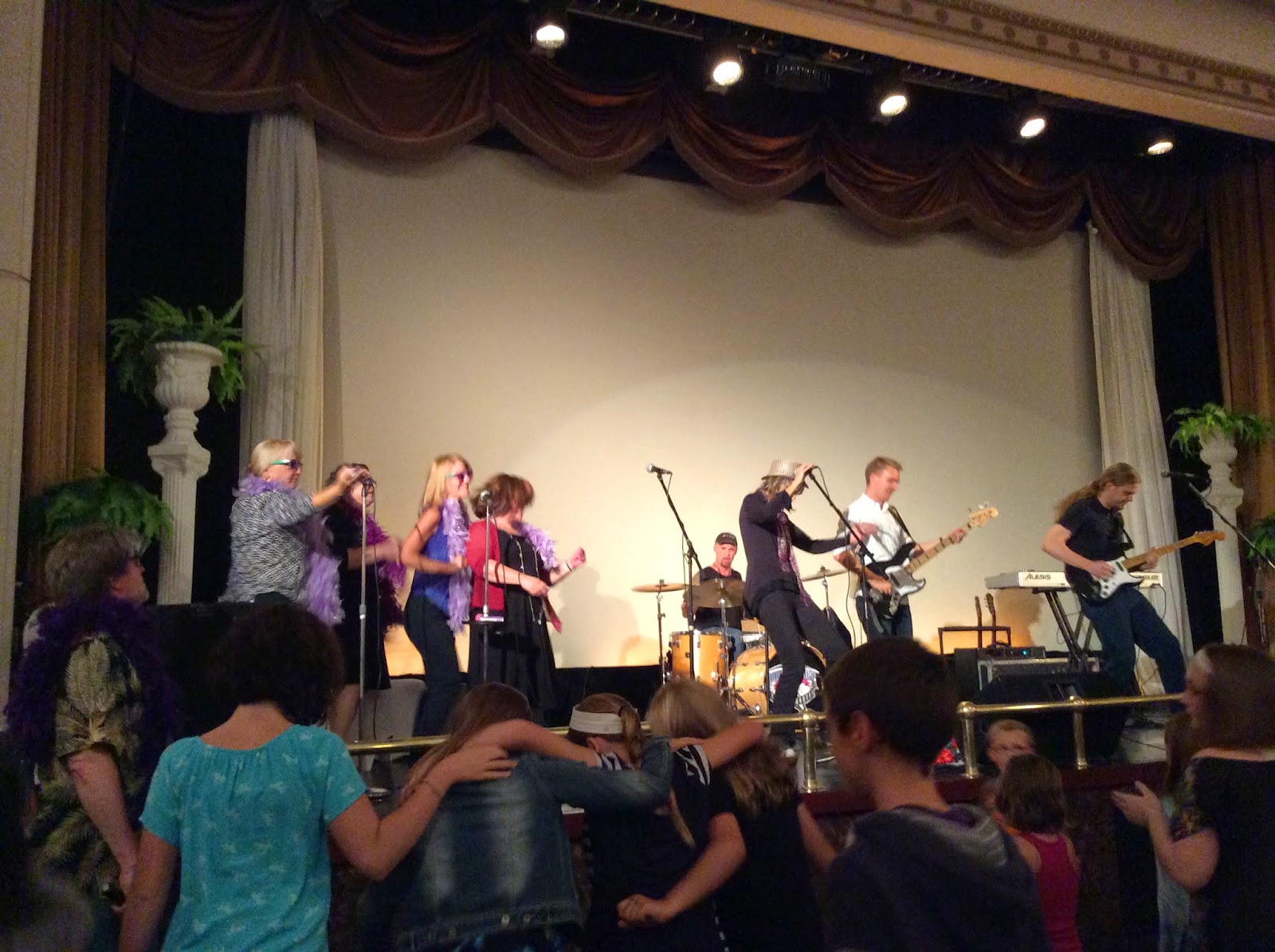 Burning Down the House (dedicated to Sammy)
Love Comes to Town (a U2 song dedicated to Heather)
The Sammy Keyes Song – this had a conga line break near the end of it where the Whippettes and I all came off the stage and formed a line with anyone who wanted to join in (and some I grabbed from the aisles and, uh, encouraged). The line snaked up and down the aisle and then ended in the “Sammiac mosh pit.” It was my favorite! 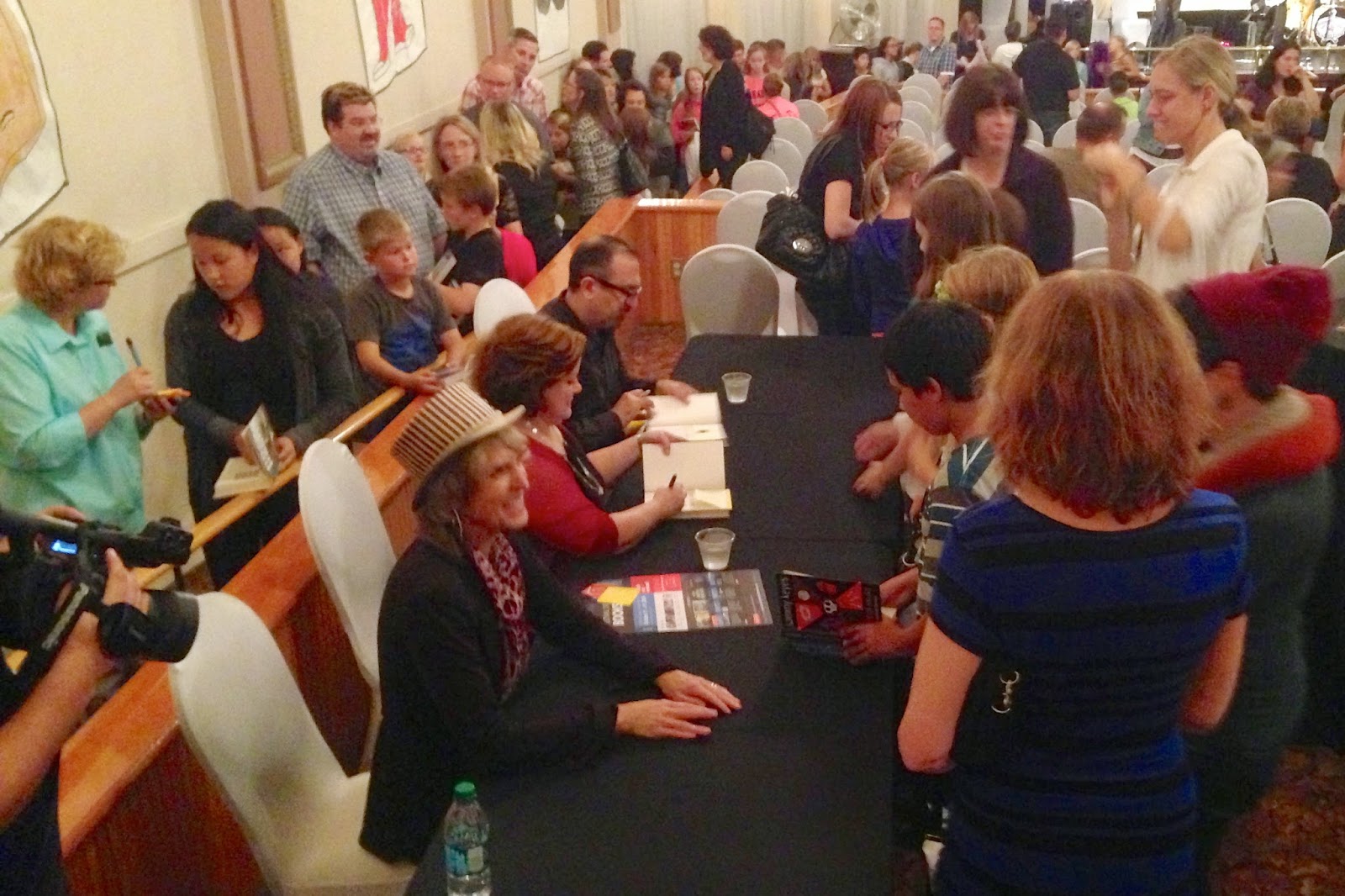 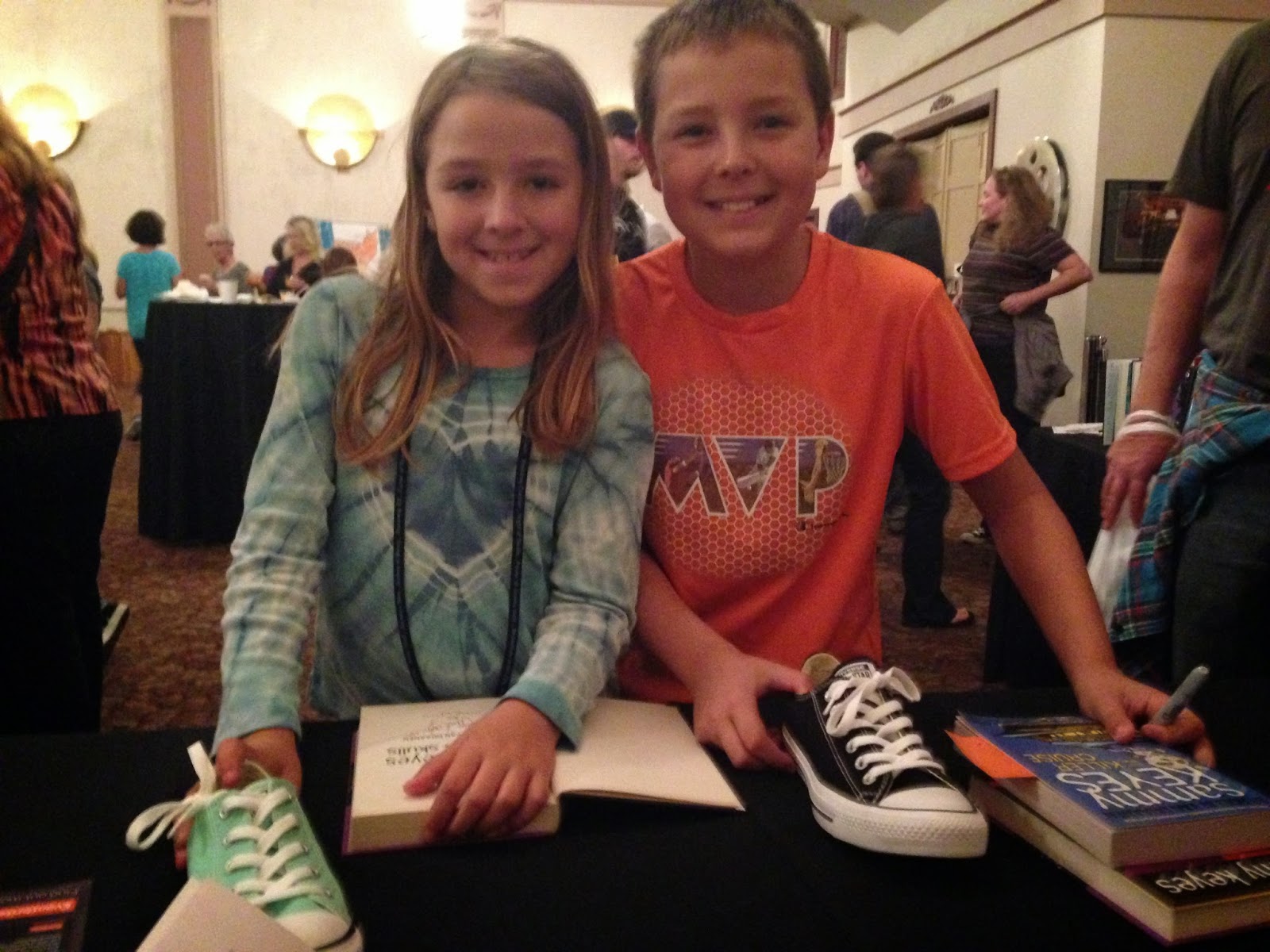 I was so busy that I didn’t get any of the food, but they served some of Sammy’s favorites, including mac’n’cheese with a dollop of salsa, and chocolate chip cookies. People ate while we signed books—we being me, Nancy, and Dan Yaccarino—who all inked copies of Kiss Goodbye, with Dan adding a Sammy drawing. These are so cool! I bought one each for myself and the boys, ‘cause I doubt the opportunity will ever arise again.

And we signed shoes. Lots of shoes. Clean ones, stinky ones…once that started, it was a little nuts, but also fun.

The party itself was overwhelming for me—having all those kids in Converse was awesome, but seeing people who had traveled great distances to be there was moving in a way I can’t describe. There were the people I knew, and then there were the people who know me through Sammy. One grandmother from Indiana met up with her granddaughter from New Mexico in Washington state because they have shared Sammy Keyes stories since the granddaughter was young. (She is now in college.) How awesome is that? And my cousin sent up a blanket that just blew me away--all the hardcover book jackets woven into a gorgeous throw. I just wanted to hold on to it all night. 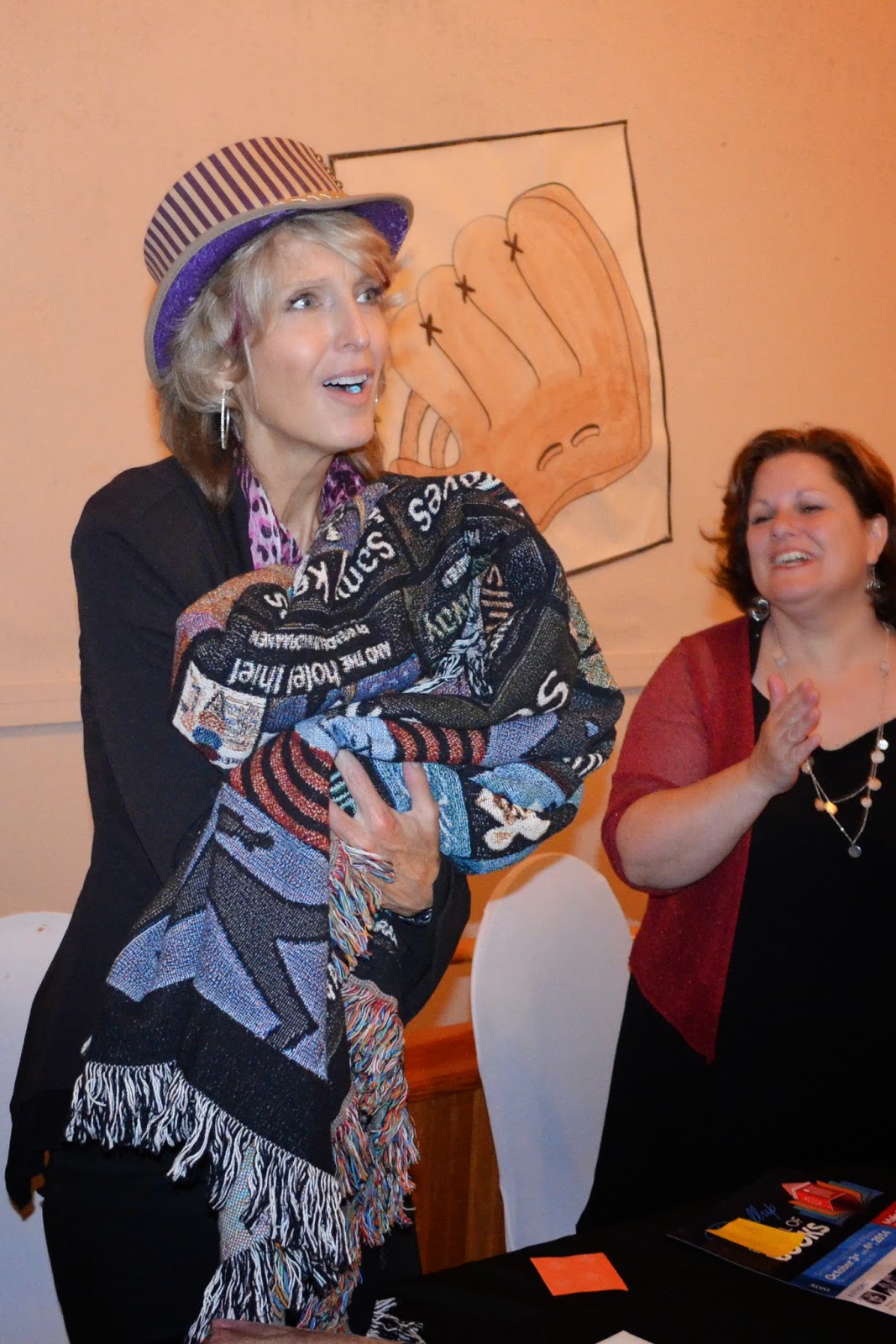 I hoped that the party would be a night for everyone to remember—I had no clue how unforgettable it would be for me.  Enormous thanks to Tim Wadham and the Puyallup Library for everything they planned and arranged—not just for the Sammy Keyes Goodbye party, but for the entire Festival weekend. It was awe-inspiring, and a shining example of how a library can so positively impact its community. I’m still shaking my head in wonder

That sounds like it was an amazing and unforgettable and awesome and.... I need to borrow some words from Sammy here. Holy smokes!

Why didn't I have you sign my shoes!? That blanket is incredible.

I'm glad the party was a proper "kiss goodbye" to Sammy. I hope the rest of the tour is equally memorable -- and that you're able to get the rest of your memories off the computer. And that you don't have too many more Sammy-like (mis)adventures along the way (but lots of interesting sidetracks).

Wow, that blanket is amazing! It's so cool seeing how people have created things based off Sammy.

Thanks so much for sharing about the good-bye party. It sounds like it was a blast, and I can't wait to see the documentary. Definitely going to try to make it to another one of the Northern Loop visits! :)

The Sammy Keyes Party sounds awesome! That blanket was the coolest thing ever!
I hope everyone has a good week!

The party was amazing!!! I wish it had gone on forever! When I got to the airport, I freaked out because I had forgotten to have you sign my high tops!! I had been talking about it for weeks, but I was just too excited! Your blanket looks amazing!!! I wish I could have seen it in person!!

It sounds like it was a blast! And look at all the Sammiacs! Man wish I could have met some of them, that would have been really cool!

That blanket looks awesome! I like what Jessica said about the party being a proper kiss goodbye to Sammy Keyes, well said!

I hope everyone has a fantastic week!

Wow, Wendelin, this sounds incredible! Makes me want to go become a children’s librarian right now. I’m glad you enjoyed the party as much as all the people you did all the prep for. Wish I could have tried the Sammy Keyes buffet. Cheers!