The Genesis of Officer Borsch 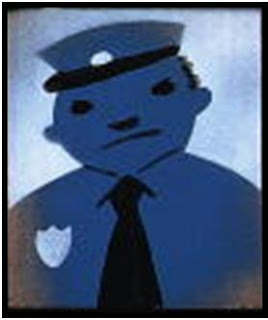 Officer Borsch acts like his squad car's a Porsche and thinks that all kids are delinquent juveniles, but he'll change his mind when he's in a bind and Sammy wrestles down a nasty crocodile...

So where did the Borschman come from?

Pre-kids, Mark and I were living in a duplex in a not-so-great part of town. Well, it was actually half of a little house on a full city lot in a bad part of town. It looked like a cute little cottage-like house from the street, but it was weirdly divided down the middle and the "central heating" was the water heater, located in the corner of the kitchen. This was the place where the refrigerator half-blocked the doorway to the bedroom.

One night we came home and discovered the front room was turned upside down. The couch pillows were all flung around, stuff was strewn about--just chaos. The bedroom was the same, and the back window was pried wide open.

We called the police and the reporting officer is the person who became the character Officer Borsch.

"Do you usually keep house like this?" he asked me after he'd taken in the front room while sucking on a tooth.

"No!" I cried and couldn't believe he was serious.

And after he'd taken a half-hearted tour of the kitchen and bedroom and had noted the things we'd already determined were missing, he seemed to be preparing to leave. So I asked, "Aren't you going to take any fingerprints?"

He scoffed. "Couldn't lift anything off of these surfaces."

And that was it.

I was mad and violated and frustrated and disillusioned all at once.

And we never got our stuff back.

Writers pull from their own experiences, so years later when I was creating Sammy Keyes and the Hotel Thief, I thought back to my encounter with the SMPD, created Officer Borsch, and had my (very satisfying) little revenge.

What's funny is that at one of my book signings at the "Santa Martina" mall, there was a long line and I could hear bits and pieces of conversations as the people in line move closer to the signing table. The books are very popular in the inspiration city, and one of these approaching conversations was about "Officer Borsch." "I think I know who it is!" one woman said, and after a volley of whispers ensued she approached the table and asked me, "Is Officer Borsch [So-and-So]?"

"I will neither confirm or deny," I told her, but I must have been grinning (at least a little) or glinting (maybe a lot) because she cried, "I knew it! I knew it!" I hurried to point out that I had neither confirmed or denied, but it was hopeless.

So that's where the character came from, but the original Officer Borsch in no longer the guy I write about. Sammy's Officer Borsch has become much more than some gruff guy who "presses his shirt from the inside out." He's become someone I understand and empathize with. Someone I like.

Maybe the real-life responding officer was simply misunderstood (or overworked, or also disillusioned, or just burned out), but I sometimes wonder what the evolution of the inspiration officer has been. Has he "grown" like Officer Borsch? Did he make it to Sergeant? Is there a compassionate guy under all the gruff?

I'm sure I'll never know, and that's probably for the best. Better to imagine that there's more to him than I met that night, than find out that there isn't.

So...do you have a favorite Officer Borsch moment? (I'll just fess-up with mine right here: It's the "oinkers in love" scene from Sammy Keyes and the Curse of Moustache Mary. Laughed 'til I cried.)

I am so glad that I stayed up to read this post. I was really worried that you weren't going to post and not until later tomorrow because I leave tomorrow morning at ten for an all week camp where there is no internet and I really wanted to read about Borsch.

I really hate cops that don't care all that much. I grew up around cops and it is sad that I see more like that everyday.

I am so glad Borsch has grown to be the awesome cop he is today. I mean with out him Sammy wouldn't be where she is. He has done a lot for her.

I loved his wedding day because it was so un Borsch like, but he loved Debra so much that he would do anything for her.

Wow, I love hearing how you came up with Officer Borsch! I'm thinking about being an author when i get older, because you really inspire me,Wendelin. You just effect( for lack of a better word) people with your books, and i would love to be like that.
And every person i meet I always think, if i ever become an author i may have to make a character off that person. And let me tell you, even for only being in this world for thirteen years I've met some interesting people.
I hope everyone has a great week!

That's the great thing about writing. you can get our secret (or in this case not so secret) revenge on people. And i find it beautiful that that women realized who it was :) Makes it all the sweeter.

The 'pig in love' moment is DEFINITELY one of my favorite scenes along with him chasing down Mr.Vince in LAVENDER. Or anything with him dressed as El Gato...
Sammy Keyes WOULD NOT be Sammy Keyes without Officer (Sergeant) Borsch so i'm kinda really glad ( in the best way possible) you had terrible experience with an officer. Or else who knows how our officer might have turned out.

In honor of The Borsch Man
--Yusa

And have fun at camp Kylie!

Sigh i'm looking at our comments from posts like a year or 2 ago. we used to have like at least 50 comments :) Gabrielle, Kylie, jessica, and omg i miss Steph's comments.... ahh good times. You guys should try checking them out it's really fun to read through them again.

In Alabama, I was once walking down a street when a police car pulled up behind me. After asking what I was doing, why I was there, asking to see my ID, he came back and explained that their dispatcher was getting a lot of calls about me and that they'd like to drive me to county line. "But," he told me, "you aren't doing anything illegal, and you aren't wanted for anything, so we can't make you leave. But we'd really like to drive you to county line."

Really?! Seriously?! Because WALKING is considered such a suspicious activity, they want me to leave the county?!

I turned him down and walked the rest of the way out of the county.

But good grief.... I wanted to say something like "Tell your citizens to try it sometime. Walking is good for you!" But I figured nothing good comes from being sassy with a cop. =)

That would be crazy awesome if that guy happened to pick up one of the first books like Hotel Thief, Skeleton Man, Sisters of Mercy, ... and figured out who he was and then thought,
Whoa! Was I that much of a jerk?!
And then he read on to discover what happened to Officer Borsch, and found the hope to change into a better person!! Then he emails you sorry and lalalaaaa happy ending!!!!=)
Anyways one of my favorite Officer Borsch moments was in Sisters of Mercy when sister bernice said anything in the motor home was what Sammy put there and he said I've known that girl long enough to know that if she says there's stolen property in there, then it's true.

Unfortunately, Bella, I think people rarely recognize themselves when they read about their bad behavior. For instance:
My dad had this boss once who was just like the boss in that TV show The Office: He thought all his employees loved him and they thought he was an idiot. Now the guy was actually a huge fan of The Office, but he failed to recognize himself in the show! He thought it was hilarious, while completely missing the irony.

My favorite Officer Borsch moment would have to be the lavender motorcycle gang arrest in Wedding Crasher. That and the 'porkers in love' scene. :)

One Officer Borsch moment that I find absolutely funny is when in CHC Sammy is all grannied up and Borsch keeps commenting that she 'looks like Tweety's granny' and that 'he can't concentrate'.

RowAn: Maybe he recognized wendelins name..., although I doubt it since he didn't sound like a good officer. Well, one can imaigine! Funny story by the way =)
Noelle: I forgot about that! That was definetly one of the best and funniest Officer Borsch moments!!!

RowAn: Maybe he recognized wendelins name..., although I doubt it since he didn't sound like a good officer. Well, one can imaigine! Funny story by the way =)
Noelle: I forgot about that! That was definetly one of the best and funniest Officer Borsch moments!!!

Some of my favorite Borschhead memories are in Psycho Kitty Queen: 1) When Sammy gives him lip, and he adds fuel to the fire by asking her about puberty -- it shows just how clueless he really is around kids, but he's trying so hard. And he doesn't even mind when she starts wailing on him, even though he doesn't get why she's upset. 2) When he figures out she's at Hudson's and teases her about the fight with Heather before getting down to his real business with her. 3) Re-reading the book knowing certain things makes the back-bump betting scene even funnier.

But I also love when he asks her for help in "Wedding Crasher," regarding the photos that his police pals all dismissed. Or in "Justice Jack," when he withholds key information from the mayor during the press conference. Oh! And how can I forget the end of Sisters of Mercy, when Sammy finally stops the mobile home... with a police car!

So many great Borsch moments we've all shared, and they all started from a poke at a lackadaisical cop.

SAW YOUR TWITTER ACCOUNT. Made my day. No time for anything else, had to say this. YES finally my fav author decides to make one, GO BAILEE MADISON. Bye.
-Steph

OMG STEPH ... ARE-YOU-BACK???? Don't go again. I miss your entertaining and fun to read comments. Seriously. I hope you check back again.
--Yusa

Jessica- I totally love the moments you picked out! I probably liked officer borsch best in wedding crasher, he had a big part in that book.

Jessica- I totally love the moments you picked out! I probably liked officer borsch best in wedding crasher, he had a big part in that book.

What I find remarkable about Officer Borsch is that he actually started softening up to Sammy long before she ever realized that he did. In re-reading, I find that he often says things to her after the Sisters of Mercy book that are cautionary, protective, and Sammy simply hears them as him giving her grief. Wendelin did a beautiful job of showing how Sammy had to learn how to not be so distrustful and angry (though she had reason to at first), and Officer Borsch had to learn that not all kids are like his nieces and nephews. Because it took a realistically long time for these two to learn to trust each other, the scene where Officer Borsch comes to Gram's apartment for the first time to thank Sammy and tell her (gruffly) how proud he was of her is my favorite moment between them. There's real growth there on both their parts, and genuine warmth - it moves me every time I read (or listen to) it. So many great relationships in this marvelous series!