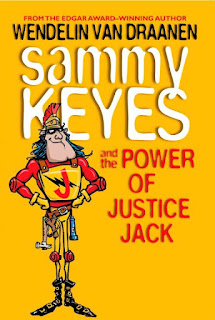 Love the idea! I think I may enter just for fun! Will you let us know her actual birthday in the end? Or will we have to wait for the book that has it to come out?

And I was wondering how different is the ARC copy from the published copy? Just wondering.

THIS SEEMS HARD! I'm not going to send a Just For Fun, but I *will* come up with my own answer, write it down, and see how close I was. I'm usually good with narrowing down birthdays, but exact DATES? Seems difficult, even for me, the amazing-genius-person. Just kidding. :) But still, it seems hard.
For example, I've narrowed Casey's birthday down to mid-December, but I can be WAAAYYY off. Because she met him on Dec. 31st, and they never mentioned him turning 15 January-through-early-December (because Justice Jack was early December).
I mean, an alternative could quite simply be that he tutned 15 sometime September, October, or November already and it was never mentioned.
One thing I'm positive about Casey's birthday is that it was in September, October, November, or December. Because it can't be any earlier, a 15-year-old 8th grader isn't realistic.
I used to just imagine it was October because thats my favorite month (October babies put yo hands uuuppp) but now I kind of think its mid-December.
Then again, I could be WAY off. But I feel like I deducted it enough.
Now I'm REALLY curious as to how its possible to figure her birth date out. I know Psycho Kitty Queen will definitely help, but Skeleton Man? Night of Skulls? HOWWW? I MUST GO FIGURE THIS OUT.
Good luck to the rest. So glad you guys get a chance again!! To be honest I felt kinda guilty reading it...but now 2 more crazy Sammy fans can. THE WORLD IS SO FAIR...and JUST...like Justice...Jack...
Get it?
JACK ATTACK.
BRINGING JUSTICE IS A MUST-ICE. Mustice? Justice?
xoxo

And Steph, you crack me up, pondering Casey's b-day. Let's start with Sammy :)

It's the relative position of dates in SM & Night of Skulls that reduces calendaring options. (When you figure out why that is, it becomes pretty straight forward.) And that's all the hints I'm giving!

Yay! We will figure it out in the end! So excited! I can't wait!

And Steph, it in Justice Jack wasn't it based in December? It didn't mention anything about his birthday...

Or have I been mistaken? Is it in November?

It was early December, not near enough to winter break and Christmas because of the date that %#%&*% put on her $^^8&* to Sammy.
That was an epic fail at my attempt to not spoil things. Hope it worked though. By the way those are just censoring regular words nof profanity, that would be very very awkward..
WVD, I already figured out the day of the week of Sammy's birthday. :D

Oh My gosh I'm soo excited!!! I entered the last contest,but I didn't win. But when I saw there was another contest,I was soo excited!!! I hope I win!! Like when saw this post I was like YES my second chance to win!!! I'm such a big fan of the Sammy Keyes series,as you can see. I think Sammy's b-day is between march and April because the dead giveaway is right after sammy's b-day. And thank u sooooo much wendlin for letting some of us get a second chance and getting justice jack!! :)

WVD, is it safe to assume that neither book took place during a leap year?

And you already have it? I hope we have the same week!

Never thought of that.

The leap year question is answered by the calendaring of the Halloween books...which is why those two are important!

I'm still just waiting for a picture of the new haircut. =)

Today it looks more Shirley Jones. Really need to work on that.

Wait what do u mean by the calendaring of the Halloween books,do you mean the date in the books or the date it was published?

The dates in the books, not the pub dates.

so the 3 books (pkq, sm, and nos) will have enough clues as to what her exact birthday is?

whoops that was a typo
i fixed it =D

I FIGURED IT OUT.
YES MAN.
I divided my mind in half, half of it on baseball (doing some sort of research project on Japanese baseball) and half of it on days of the week, 366-day-years and ultimately, Sammy's birthday.
I might be wrong...but I wrote it down and webcam-photoed it so on the day you announce the answer, I can check my answer.
COOL STORY BRO.
Good luck people! I can't wait to see the winners.
xoxo

UGGGHHHH i only have 2 of the books so i've been looking through the google book preview but i'm worried that some important pages are missing. Do you NEED nos to solved it? I'm so confused on what year and everything but i got the month and got the date narrowed down to between a week.
t's the relative position of dates in SM & Night of Skulls that reduces calendaring options. (When you figure out why that is, it becomes pretty straight forward.
Srry i don't know what that means.

OOOOOOOOOOOOOO!!!! so excited, i think i know some of it off the top of my head, but then again, the Lady Lana situation will also mess up the year...haha!
just for fun, wendelin and fellow sammy keyes fans, i made something for everyone! it's my version of an album cover for Sammy + Casey's song, Waitin' For The Rain To Fall by Darren Cole and the Troublemakers. i know the song isn't real, but i wish it was! WENDELIN you and your band should perform it sometime! but even if you don't, here is my art for it! i hope you like it!!
http://www.polyvore.com/waitin_for_rain_to_fall/set?id=47317687
<3julie<3

YES!!!! A chance to cure my obsession with Justice Jack!!!I think I've got the majority of the answer but I need one of the books to complete it. Luckly, I own one of the books and have one checked out from my library. So I am sending my little sister to her school library to pick up the third book(I hope they have it!!!)so I can have the complete answer. They had a BUNCH of SK books at my middle school library, and I would go there every morning and just reread them all. At my high school now, they have NO sammy keyes books. it depresses me. Although i saw Flipped at my library :) I know how to use the last book to figure everything out.
Thank you for the challenge...although i should really be working on my projects...

Yosh! When I saw this post and it said "second chance contest" I totally flipped out. I must get to work searching for the answer! Thank you Mrs VanDraanen! And good luck everyone ^_^

It's a puzzle, but not THAT hard. I'm looking for her birthday/date of her 8th grade year. Everything you need to know is in the three books I mentioned. No further hints about leap year needed. Go forth and solve!

I'm soooo sad!!! I live in Mexico and my copies of PKQ and NOS are in MI so I'm not gonna be able to figure it out!!! :( This is an awesome contest though and I can't wait to find out Sammy's birthday!!! :D

I've looked alll over in the books, because I could have swore, Wendelin, that you actually stated her birthday in one of the books. :/ Maybe i just imagined it, but I have the day already; the question is how I am going to find the actual DATE. Luck to all!

PS: What if only one person gets everything right? Will you pick the next closest answer to the actual birthday?

It was never identified specifically in a book. You have to put the pieces together and that can be done by using the information in the 3 books mentioned.

And no, only correct answers are eligible!

i was rereading nos and i realized there was a typo
on page 106 and 107
the line "so u think he's a cadaver conductor," and casey
is repeated

Yeah someone else here found that out when it came out. When i read it the first time i didn't notice it.
I just sent in my actual answer cuz i just got nos from the library. I sent two answers but my actual one is the latest one i sent. sorry i do that.

and will you tell us her real bday today?

Yes, I will use the last of multiple submissions. Yes! Today's the day :) See you tonight!