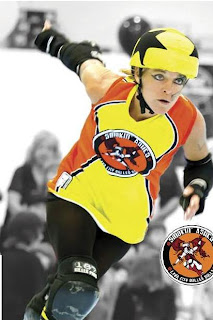 Never underestimate the power of a librarian.
This is something I've learned over the years and if you're a whippersnapper, take it to heart.
Also, never stereotype a librarian.
I was hosted in Oregon this week by one who's a big fan of Death Cab for Cutie, and three--count 'em, three---who compete in roller derby.
That's right, they're...(pump up the volume)...Derby Dolls!

Of course derby dolls have their character names, and let me tell you, at nearly six feet of pure power, Dame Deviant (aka a YA public librarian) is not someone with whom you'd want to argue about overdue books.

Sounds like a character out of a Sammy Keyes book, only she's the real deal.
Bend, Oregon is built on volcanic earth, so, going with the geography, the derby league is named the Lava City Roller Dolls and the teams have such names as: Smokin' Ashes and Cinder Kittens, and on the back end of their costume (aka uniform?) you can read Kiss My Ashes.
There are also teams named 12-Gauge Rage and Moulin Bruise. 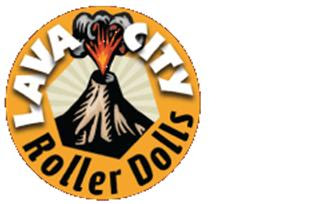 You gotta love it. Especially since they roll for more than just fun and competition. From their website:
LCRD is made up of strong women from all walks of life who share a common passion for the sport of Women’s Flat Track Roller Derby. The members of LCRD are also passionate about our community and participating in charitable events throughout the year that benefit a variety of charities throughout Central Oregon. Some of our charitable partners include: Saving Grace, The Leukemia & Lymphoma, and The Boys and Girls Club of Central Oregon.

Alll this has gotta make you wonder, what's my librarian up to after she skates out of the building?

You might want to check out the roller rink.
Posted by Wendelin Van Draanen at 10:27 AM

Woah. And to think Librarians were quiet, clam people who only got ticked off when your books were overdue. DANNNNNNNNNNG.

I love Death Cab for Cutie! ^^

These people have secret identities. O:

Never judge a book by its cover sounds so cliche... but I can't help but say it. =)

Man this makes me wonder what my librarians do? I loved watching roller derbies. And I especially loved the psych where Juliet had to be apart of one. It was hilarious!

That reminds me of Psycho kitty queen and how the wrestlers are different. also ( iforgot which book its in) hudsons renter, was a rapper but also looked different.
I love books and i was a TA for the library, but my favorite sport is rollerblading! I mean it feels like i can fly when i do. I learned with my brothers rollerblades (that were like 3 sizes big at the time) in my garage, but i love it now!

Nice blog. As a librarian you might be interested in the word play involved in cryptic crosswords. I am doing a series of posts on solving cryptic clues. This was the first one I did. http://caroleschatter.blogspot.co.nz/2012/01/cryptic-crosswords-solving-hints-1.html Hope you enjoy.