Hi, everyone – Mark here, subbing for Lady Wendelin. (Okay, when the boys were little we had a kid’s book about a knight and a dragon and a fair princess named Lady Wendolyn. It stuck. Kinda like the little boy named Patrick down the street, who our oldest called “Saint Patrick” for the longest time. Or our friend Mary, who the boys called “Mary-Mary”, from the nursery rhyme…) 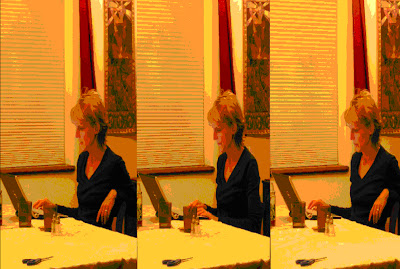 I’m writing to provide a semi-external perspective on Wendelin’s writing process… and because I told her I had what might be an interesting blog topic, after I cobbled this pic together last night.
See, even though the 1st and 3rd frames look identical, they’re not - all three photos were taken in the order shown, a few minutes apart. And she had no idea I was photographing her, as she was working away late Friday night on the ‘SK and the Wayward Parents’. (She was in the dining room, and I was in the kitchen supposedly doing dishes. But I was watching her work - as I am wont to do - and something just caught my eye and I thought I’d take a few pics.) Then, when I looked at them last night, I was taken by the back-and-forth nature of the photos: She’d sit back and think. Then she’d write some. Then more thinking. Then more writing. Etc…

This struck me as a metaphor for the whole creative process. We’ve all heard ‘Writing is Rewriting’. And of course, ‘Writing is Hard Work’. (Both true.) But it also occurred to me that ‘Writing is Thinking’. (I suppose this is a big “DUH!” to most of you, but I’m known to make these very obvious discoveries, which everyone else already knows. Like, I’ll come in from the outside on a sunny day and announce, “Hey, you know the sky is really blue!”)

So, by ‘thinking’ I don’t necessarily mean the analytical kind, where you fall out of the creative flow, but more a mulling over – either what you’ve just written or are about to write - holding the words in your head like stones in your hand, rolling them around and around and trying to get them to fit together smoothly. And not being afraid to toss them back in the stream and fish out some new ones, if they’re not quite right.

Wendelin has talked about the concept of ‘do a chapter, do a chore’. Sometimes, if you’re stuck, it’s good to get away from the keyboard and go do some relatively mindless task for a while. But really, this may just be ‘thinking’ on another level, allowing your subconscious to get into the game.

But regardless, good writing doesn’t seem to be a linear task, at least not for those I know who do it. It’s more like a tennis match, whacking that ball back-and-forth, only you’re playing on both sides of the net.

So, look at the 1st and 3rd frames. That’s where the real writing is happening…
Posted by Wendelin Van Draanen at 9:51 PM

Yes, writing is thinking! You can't start REALLY writing unless you you've thought of what you want to write. Otherwise you'll come out with a bunch of random words. When I'm writing and I get stuck, the best thing to do is distract myself to where I'll be doing something and get a perfect idea as to what I'm going to write. Most of my inspirations come from books I've read; Sammy keyes, Artemis Fowl, The Mother-Daughter Book club, etc. One is about mystery, one's fantasy, and one's about friendship. Without, at least, one of those things, your writing is incomplete.

that does make sense! don't worry- i point out the obvious all the time! oh my goodness its crazy to think of a sammy keyes #16!!! AHHH!!! you have NOOO idea how devastated i will be when #18 comes out!!!!
i'm reading the City of Bones by Cassandra Clare right now and its pretty good! although i'm still not up to speed on the whole demons vs. shadowhunters clarifications :) have you read this series, Wendelin? ALSOOOO have you read The Maze Runner Trilogy by James Dasher?!?!?! THAT IS ONE OF THE BEST TRILOGIES OUT THERE!!! its a dystopian setting and AHHH its just so good!!! the third and final one was AWESOME and the author just released that he's writing a prequel!! AH!!!
well, keep writing Wendelin! i'm sure its going to be FABULOUS!!!!
<33333julie<333333
PS what's on your christmas list? if you celebrate christmas...i honestly can't remember!!

Oh my god, haha. Thats really cool actually.
Did you know she is my idol?
I look up to her.
Now you know.
If that is what makes her the amazing writer she is, I will emulate her process to every last breath.
That sounds really creepy, but its supposed to be flattering.
WENDELIN VAN DRAANEN, I LOVE YOU. LIKE YOU ARE MY IDOL. LIKE, REALLY. PLEASE. DONT. LET. GO. ITS A WONDERFUL LIFE. A WONDERFUL LIFE. NEVER GIVE UP CUZ ITS A WONDERFUL LIFE.
I'm sorry, but something about saying she (or you, if you are reading this) is my idol makes me want to break out into song.
Okay?
Because I really look up to her/you... (idk who to direct this comment to, because WVD didnt write the post but might read this)
xoxo
Steph

PS, coming from a photo geek, I like the editing.
God, I am such a suck up.
It just comes out when I comment on this blog, okay?
My inner suck-upness just....comes out of the closet. Or something. Like that. IDK.

Oh wow. You are right. Writing is thinking! I never thought of that before.

I do the obvious thing all the time too. I'll run in and be all like, "Guys, carrots are vegetables! They don't have seeds!" and my friends will stare at me and nod really slowly like they think I'm joking or something.

I just discovered my love for entering when I type thus the multiple paragraphs.

Oh and Julie, did you know that Cassandra Clare started out as a really popular fanfic writer? THERE IS HOPE IN THIS WORLD!

I'm really excited for the sixteenth book. It shall be quite amazing due to the fact that we are learning about Heather, I should think.

Btw, Cammylover, songs are quite beautiful.

Meh, I really need to stop speaking like that. Habit. Happens when I get excited.

Cass Clare started off as a fan fiction writer? Very hard to believe..... I guess there is hope........ I didn't particulary like her writing, or as a work that I would read over and over again. I only read it because my friend was breathing fire down my neck to read it (since i always did the same to her, but only with books that I liked and that in turn that I knew SHE would LOVE). I saw it more as a fake rock compared to other writing that I have read, with would metaphorically be a real rock.

Cassandra Clare DID start off on fanfiction as Cassandra Claire, then she got charged for plagiarizing and changed her last name spelling to "Clar" on her books so people wouldnt remember her as a plagiarizer.
NICE STORY, GUYS.
This is why you stick to WVD.
ORIGINALITY, authors. Ever heard of it?
Totally not directed to all the Twilight-wannabe books. *saracasm
Kay.
xoxo

I hope some day I have a husband who will write my blog posts for me when I'm too busy.
And I LOVE THE PICTURE. I seriously considered making it my desktop background, but then I thought that would be creepy.
"Who's that?"
"Oh, my favorite author."
"Oh, cool, did you meet her?"
"...No."
"Then where'd you get the picture?"
"Her husband."
"Did you meet her husband?"
"...No."
But of course, I'm being dramatic.

sammy4ever LOL
anyways im still waiting for the 16 book to come out and now i have to wait for the 16 one at the same time!
Can't wait. do u know when its coming out? anyways i love you and your husband is so sweet. :)

Haha, sammy4ever, I have a lot of those conversations with my friends.