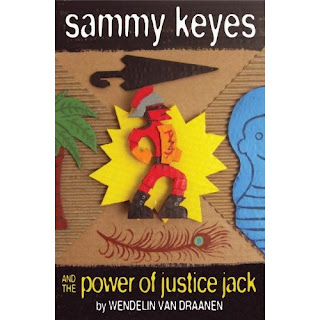 I hate to get information about my own books from Amazon.
Like, shouldn’t I be the first to know?
Or, at least, somewhere in the top ten?
I was actually at the Amazon site because I’d been given some good news—The Running Dream has been named one of Amazon’s Best Books for 2011 in the Young Adult category, so I was checking that out.
But then I happened upon the hardcover art for Sammy Keyes and the Power of Justice Jack, which—as you can see—is a bit of a stylistic departure from the rest of the series. I’d seen (and commented on) the initial sketches, but this was the first I’d seen the final art, and it caught me off guard. Partly because it looks collage-y instead of painted, and I wasn’t expecting that. My reaction was rooted in how the art fit with the rest of the series, coupled with a knee-jerk annoyance at seeing it for the first time on-line.

I tried to tell myself to let it go—that it was a done deal and there was nothing I could do about it.

And what is it I wanted to do, anyway?

I recognized that I was probably hurt more than anything, which I told myself was childish, but I kept staring at the Amazon page and the situation festered. I was feeling overlooked and undervalued and just…irritated.

He persisted, though, and had made good headway in convincing me to call—to the point where I actually said I would--but just then FedEx drove up.

I like our regular FedEx driver. She’s friendly and competent and she’s been navigating our driveway for years without complaint. I can see her coming from my office window, so whenever I can, I go out and thank her i in person. And since my son had just convinced me to make a call I was feeling cowardly about, I took the FedEx truck as a welcome (albeit temporary) escape.

The FedEx lady handed over a box, and started chatting about having seen me on the news the previous week. She was her usual upbeat self and told me she had a grandson she reads to—he’s only two, but she love-love-loves to read to him—something he won’t be able to do for himself for a while, not, it turns out, because he’s two, but because he’s blind.
Blind?
This was the first I’d heard of the grandson, but my heart immediately went out to her.
She was in grandma mode, though, and having none of my sympathy. She whipped out her iPhone and showed me a video of her grandson swinging, and while I watched him go back and forth she told me he’d been born with detached retinas and that he would likely never be able to see, but then went on to talk excitedly about how he’s started walking by holding his palms against the walls, and how he’s the sweetest dearest thing.
“He doesn’t know anything else,” she said, putting her phone away. “So he’s happy.” Then she teared up a little and said, “It’s been hard on my son, though,” and it came out that in his two short years of life her grandson has already been through four eye surgeries and there will have to be ongoing surgeries as he grows—something about scar tissue and pressure and headaches.
I said whatever positive things I could think to say to her (like how blessed the boy was to have her for a grandma), but when she was gone I just stood there feeling like an ass.
How many lessons do I need about not sweating the small stuff?
Haven’t I had plenty already?
Why do I need these refresher courses?
Maybe I didn't like the way things were handled, but good grief. So what? It’s art, not life and death.
And, more to the point, I was born with eyes that can see it.
Posted by Wendelin Van Draanen at 8:32 PM

I can see Sammy in all your posts. You take one personal situation and turn it into a life lesson. This is such a sweet message. (^_^)

We all need reminders from time to time about the really important things in learning to navigate every-day living. What a wonderful "what really matters" lesson you shared in this story.

Wendelin's avid readers: The Running Dream has been nominated for the Goodreads 2011 Choice Awards in the Young Adult fiction category. Please go to goodreads.com, register, and vote for The Running Dream in the 2nd round of voting.

Wendelin, congratulations on another honor for TRD!

This was such a great post......
Before I got rid of my FB, I wrote a post similar to this after being inspired; similar to you, Wendelin. Sometimes we take so many things for granted, and yet as we are all healthy and having the good life, we overlook it with trivial, mediocre facts (not trying to make a SK cover sound mediocre but... you get the point.)
Like Caradith said, though, I think we all need that mental kick in the butt to shape us back up, and so that we can realize that we have a lot to be grateful for.

Congrats on the nomination! I will be voting! :)

Wow, you know what? I really liked this post. Like, a lot. I would have been like you--kind of pissed at first that the first time I see it is online (I mean, if I were you, the author)…but yeah, the FedEx lady and the blind grandson thing..
wowowow
I really liked this because it was short but told an amazing story. And a lesson. Or whatever you want to call it, but I loved it.
Like its one of my favorite posts of yours.
Also, I am indefinitely in love with that cover art. It just pops out, like WHOA. So cool, and I love how Sammy is huge? At least she's on the cover--I noticed how she wasn't on the cover of Night of Skulls and I was peeved by it for a whole week after. I don't know why, but I would have wanted her to be on all of the covers.
Wait-- I need to think of your post and how you said you shouldn't sweat the small things, and that is definitely a small thing, and I shouldn't care because at least I can see.
Look, 2 lessons learned already.
Welll…I loved this, and I'm totally starring it in Reader. 'Kay.
xoxo

I don't think you are an ass. I wouldn't even consider you an ass even if you changed the front cover art even after hearing about her grandson. I don’t think you should even feel bad if you want to call and change the cover. Just because there are people out there who are homeless doesn’t mean I will be keeping a contractor who built my house below building codes.
The boy is blind and he is using what God gave him to the fullest abilities, beginning to walk, etc. You have your eyesight so you should use it, knowing people that aren’t as fortunate to have it, to your fullest ability. This may mean giving your readers/customers a good front cover book art. And maybe you actually do like the front cover, I am just saying that you shouldn’t feel afraid to change it.

You're not an ass, you're awesome! We all love you!

The cover doesn't match the rest of the series, but by itself, it's not too bad.

I'm not a cold person, but I'm still bugged about the cover art.

Also, I am making a short movie for my cinematography class about a blind girl, but the audience isn't supposed to realize she's blind until the end. So this blog was written at an appropriate time :)

its crazy how those things happen when youre feeling sorry for yourself and then you realize how blessed you are to have a great family, or great place to live, or even your sight.....
even still, though, that sucks that you weren't the first to find out about the cover...i mean, hullo!! you're the one that wrote the book that NEEDS the cover art!!!!
jerkkkkkkkkks!!!!!!
have a good week wendelin!!
<3julie<3
PS what is your family doing for thanksgiving?
my 3 older sisters and grandma are coming, including my oldest (25 year old) sister! she is flying up from her house in Nashville to NH for Thanksgiving (for the first time in 6 years!!!!) and i'm wicked stoked to see her! i mean, i saw her over the summer, but still! and besides, her husband was with her then, and lets just say her husband can talk my ear off. Luckily he is NOT coming with her now though! weee!!! (he's going to be in Europe with a training program thing...long story)

Hold up, hold up. People DONT like this cover? Home come? I mean, I know its different but thats the thing...its DIFFERENT. Which makes it new and unique and exciting.
Okay, I dont understand the logic. It pops out and looks cool to me, so for each his own.
But still! I LOVE THIS COVER. At least she's on the cover, bam, right there, instead of NOT being on the cover like Night of Skulls.
I like the palm tree too.
Just saying that again.

Oh, and Ms. Van Draanen: I swear this is the last comment but I really want you to see these 2 SK photos I edited (I havent made one in like, forever, so its a special occasion for me).
Especially the baseball cap one, I want to know what you think.
That is, if you have time and WANT to see them real quick--if not, I understand.
OK I SOUND LIKE A DESPERATE FREAK.
pleaseohpleaseiloveyoutoomuch<3
This is a link to the post on my SK blog:
http://simplysammykeyes.blogspot.com/2011/11/my-sammy-photography.html
ILY<3

I saw it on goodreads.com and i was really suprised. its not thta i don't like it, its just..... different. I like the other ones better but i still like this one too. When is it coming out though? I'm really excited but sad that i have to wait AGAIN.
Its so sad that he was blind. People like that make me realize how lucky i am to be healthy. Thanks for posting this. And once again i say - i wish you would come to my school.
A bid Sammy keyes fan --
Yuseyz

+1 for Cammy Lover! I think this is the best of the hardcover covers yet. There's just something about Justice Jack's expression... I think Dan captured him perfectly.

Cracks me up everytime I look at it. LOL!

I can see how you'd be irritated by the cover. I kind of like it, though(:
Congrats on The Running Dream!
This has been one of my favorite posts,ever, I think (:
<3
Abbi~

Once again like Caradith said, go to goodreads and vote for the running dream in the semifinals for the best young adult fiction category!!

Just like I tell my students... It is all about perspective.