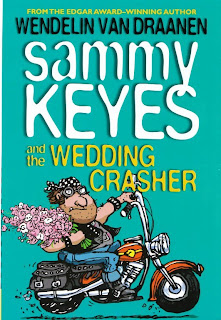 Hi there and thanks for checking in! Before I get going on this week's post I want to thank everyone who left such nice comments last week. This community is so positive and supportive and I know I've said it before but, once again, I appreciate you!

(I also know there are questions in last week's comments and I will get back to those asap.)

Meanwhile, I think you'll find this week's entry fascinating because it's the inside scoop on the cover art process. I've mentioned in several entries how the writing process is in some ways more a re-writing process, and I think it's worth noting that this is often the case with the artwork as well. (And, extending the concept, with anything creative.)

To the left is the cover for the paperback edition of Sammy Keyes and the Wedding Crasher (which I believe comes out in May). I received the proof in the mail last week and busted up, even though I'd seen previous sketches and had a pretty good idea of what it would look like. Still, seeing it as a finished cover was really fun.

So how am I planning to explain all the steps involved in getting to this cover when I'm not the artist?

I'm going to let Karl Edwards, the illustrator for the Sammy paperbacks explain via his blog post. For those of you interested in art or illustration, this is an invaluable look at the process. For those of you who are just Sammy Keyes fans and want to see what the poor artist had to go through to make us all happy, you'll see the previous renditions (and Sammy on a motorcycle!). For those of you who have already read Wedding Crasher in hardcover, you'll see that all the sketches took liberties with the storyline, and that is because capturing the essence of this story with a single image (note that all the covers have just that), was a tough job.

So until next week, I'm delighted to introduce you to Karl Edwards, his blog, and his  fascinating overview of the cover art process. Enjoy!

PS If you like Karl's entry be sure to leave him a comment--it's always nice to get positive feedback and you guys are great at that!
Posted by Wendelin Van Draanen at 9:11 PM

Haha, anyways I will definitely check out that, I'm not quite into art but I think it would be interesting. I do love photography though. I've always wondered how they decide what to do and how to do it for the art on covers of books. A lot of people probably don't even think about it, but really the amount of work that goes into that is amazing really. I think it's very interesting...

Hey girl..
Love the cover!
As an advertising exec. for over 20 years the only thing I would change is the color of the bouquet of the flowers to a brighter pink. It will catch the "eye" and will encourage people to pick up the book and take a closer look. JMO..
Love ya,
M

Oh yes and i was also wondering ( just like rose ) if there was to be a Sammy keyes movie.
thanx,
Ginngle11

Ooh pretty,even though i prefer the hard covers this i like a lot also.I will definitely check the post out,I love art,drawing,exc.I also love Sammy Keyes books,it would be great to have a movie!Check me out for it! ;)

I have got to say, this one is by far, the best. I'm not really sure if it's the solid blue-greenish background or the motorcycle guy with the flowers that compels me to say that, but either way, I love it!