It's Always A Big Deal 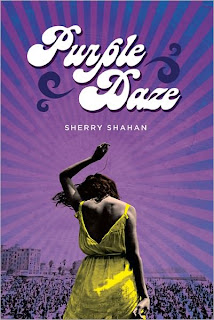 We just returned from an author friend's book release party. (Sherry Shahan for Purple Daze--a free-verse YA novel with "mature" content.) It was a 60's themed bash in keeping with the new book's Vietnam era setting, and it was nice to see so many of her friends celebrate her newest achievement, even though she has many books already in print.

Books are like babies. Everyone makes a fuss over the first one and showers you with congratulations and gifts (well, the actual buying of your book anyway), but after you've had a few, people (understandably) start losing track. The fussing fades away because it's no longer a novelty, it's just what you do.

So if you're the tenth child in a family, there will probably be few pictures of you, and lots of hand-me-down everythings.

But it takes just as much energy to build that tenth child as it did to build the first. Actually more, because you now have those other nine to tend to and keep on track.

So it's still a big deal to you, and still as big an accomplishment. And even if it has grown into "what you do,"  each book that follows that first one is just as special. (And something people who are praying for their first book would kill for!) The difference is, you can't expect the rest of the world to do cartwheels for you. It becomes your job to throw the celebration, and why not? You deserve to celebrate, and it's a lot more fun with others around you.

I never met an author before becoming one, and Sherry was one of the first published authors I got to know. So it was really great to see her decked out in hippie gear and taking time to celebrate what I know was several years of hard work.

It was also good to talk to other people at the party--a nice reset on appreciating the good fortune of having even one book published. There was a woman there who told me how my talk at a local writer's organization ten years before had stuck with her.

I'm like, Hello? What in the world did I say?

Turns out, words of encouragement. About sticking to it. She said that my ten years of rejection served as encouragement to her. She's now very close to getting her first book picked up by a major publisher and she said that once she does she'll pass the same encouragement on to others.

Final thought: Sometimes when things fall into your lap--or they just happened for you easily--you don't truly appreciate that there's cause for celebration. But it's not lost on the person who's been trying for years and years. So if you're one of them, hang in there and visualize your first book bash. Then your second. And your third.

And invite me, would you?

It's always a big deal.
Posted by Wendelin Van Draanen at 7:58 PM

Yay! First commenter! I just was thinking that you always have such inspirational things to say in all your posts. Last week you talked about the importance of happiness, and this time you talked about how whatever you accomplish, it's always worth celebrating, even if it's happened before. Thanks for the great post Wendy, it really made me think.

awwwww! thats a really sweet thing to say and so true!!!!
I believe an accomplishment is an accomplishment and that no matter what it's for it's always special as you just stated in your post. to tell you the truth when you come out with a new sammy keyes book, i celebrate at my house by just being a little bit more considerate and thoughtful of others because your books make me feel so good! Loved the post! thanks again! Ill come back next week!
Bye:)
Ginngle11 <3

I do also believe no matter what,if you accomplish something,to be proud!Because you could have never done what you've done,so now that you've done it be happy.Also,when i read a new book of yours,Or any good book,I am HAPPY.I just am.And I am the Youngest of 5.Everyone thinks I am being 'favored'.My sisters and brothers always say that my parents have an 'Abbi and Philip filter'.Because he's oldest and im youngest.

You know Wendelin?...no matter what's going on in my life - no matter what I'm struggling with, Sunday nights always give me a sense of peace. Your words always carry such comfort regardless what you're discussing. I love this post and I agree with your words. Every triumph is worth celebrating, no matter how big or small. Thank you for helping me look forward to something each week and thank you for sharing your amazing thoughts with all of us.

That was probably one of my favorite posts!
Loved it!
I could totally relate with you about the tenth child thing, because even though my mom had two kids, I'm the youngest and whenever I used to look at all the baby pictures there were more of my brother than of me.. and things that I accomplish don't seem like a big deal because my brother has already accomplished them. Haha, so I wish I write a book before him!
Anyway, lovely post!
-Pooja

That is so true. It seems, for me, that things come so easily. But in actuality that's not the truth. I have to work SO hard to accomplish things. Nothing is ever really easy. That's one lesson I have learned, things won't come easily. But when you finally get them it's that much more worth it. And all those failures along the way have only made you that much more stronger. So what you said is VERY true, especially to me.

Wendelin, is there a way one can subscribe to these posts? Or do you have facebook account. Ok, I must admit, I'm not reader of your books (YET), but I plan to and with the hopes to motivate my 10 year old daughter as well. We are addicted to the movie Flipped. So, we need to find out if there will be Flipped II (hint hint). Or I would love to know when you get books published, etc. Thanks so much.

(sorry this is the only way I could figure out to get a message to you).

I am at a loss for words. I read your posts everytime, and I never know what to say, becuase you always say everything I can think of. Granted, I only think of it after you say it, but we can pretend... Anywho, if I write a book, you're defenitly invited to my celebration. Now I just have to write the book...

Hey i was wondering if there was going to be a sammy keyes movie? I looked it up and the new york post said something about it but I haven't heard anything else.

The book is SO good! I got it from the library and after i started reading it, I couldn't put it down! I just love how it's written! Thanks so much for recommending it!

It amazes me how I just ramble about something and somehow you guys find value in it. I do fall behind (as I'm sure you've noticed) but catching up on your comments is always uplifting. Thank you all of you!

Pooja: Mark loves your name, did I already tell you that?

Lexi: I know I appreciate the things I've struggled for so much. It's a disguised blessing, really.

RP: I know there is, and I don't think it's hard since you already have a blogger account, right? Just find the "subscribe" button--it's lurking around somewhere!

Rose: Any movie news will appear here, I promise.

Eleanor: I'll be sure to tell Sherry--she'll be delighted!