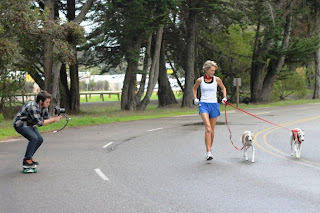 For a day that I was kind of dreading, today turned out to be pretty cool. Random House arranged for a small crew of film studies students from a nearby university to do a video shoot for The Running Dream at my house today. The plan was for them to interview me about the impetus for writing the book, the research involved, and what I hoped readers would take away from the story. They were also to get B-roll footage of me working at my desk, and more of me running. All of this would be whittled down to 90 seconds (or so) and used for promotional purposes and available on Random House’s dedicated YouTube channel. The trouble with a video interview is that you want to sound unscripted, yet intelligent, but when that red light is on, what comes out of your mouth is either stuttery or stupid. At least that’s how my mouth seems to operate under the glare of the mini red light. The other trouble with a video interview is hair. It just knows. It’s supposed to be perky (or, at least, pleasant) so it becomes immediately sullen. Or rebellious. Or too tired to do anything but just lay there. I’d liken hair on important days to teenagers, but that wouldn’t be fair. Put on some good music and a teenager will come around. I tried that with my hair this morning and it remained sullen and flat. But whatever. It’s just hair. It’s your words that are important, right? What was nice about the guys who showed up—Tony, Aaron, and Kyle—is that they were seasoned enough to know what they were doing, yet young enough to still have that spark. You know—that enthusiasm people have when they believe that what they’re doing matters. So they set up their equipment and we went through the questions my publicist had suggested, but when we were done with that they had me just talk about The Running Dream. You know—a conversation. And I think that was when I forgot about the mini red light and finally relaxed. I love this book, and there’s so much to it and behind it that it’s easier to just talk about it than answer questions about it. An answer should have a beginning and an end and not a bunch of segues and sidetracks. A conversation…well, that’s different. Of course, it’s much harder to edit a conversation than a Q&A, but I’d personally way rather hear someone speak from the heart than hear them hit all the important talking points. Anyway! That was the interview portion of it. What was next was B-roll footage of me working in my office. I’d put all my usual desk clutter in a box and hauled it out of there so there’d be room on my desk for the prosthetic legs I’d borrowed. Let me back up here and say that it’s really cool to have gotten to know the people who have helped you research a book well enough to be comfortable ringing them up and asking, Hey, can I borrow a leg? To the wrong person, that could be a very insensitive (make that crass) question. But to these guys it was, Sure. We got you covered. So covered, in fact that right now there are five prosthetic legs in my office, including a running leg, and a flipper footed one for swimming. The flipper foot is awesome. More about these guys in a future post—I promise you’ll want to meet them. But now I’ve got to focus, not get sidetracked, so back to the mini-video YouTubey thing. The last phase of this adventure was getting footage of me running. Now, the truth is, I was not keen on them videoing me running but when they said it was fine for me to bring the whippets, well, I was suddenly a lot more okay with it. So we drove down to the local campground, and while I leashed up the pups, they hatched their plan—Aaron would ride a skateboard beside me, shooting footage as I ran. A skateboarding videographer? How cool is that? He had this clever counterbalance contraption attached to the camera which served to steady the shot. (It’s that backwards “C” shaped gizmo in the photo.) The dogs and I ran back and forth, back and forth, while Aaron rode beside me, pumping along, shooting video. It felt kinda like being out on a little adventure with Sammy Keyes. So even though it took about 5 hours to shoot what will become a 90 second video, the guys made it fun and interesting, and the day turned out way better than I’d anticipated. Now if they’ll just make me look good and sound smart!
Posted by Wendelin Van Draanen at 8:45 PM

That sounds like it was a really fun and unique experience! I can't wait to see the video :).

You shouldn't worry so much. you're a writer, so just talk about what you love- books.And if that doesn't work, then just pretend that there is no camera.

you could never not sound smart, wendelin. :)it's funny, but you mentioned prosthetic legs, and i just finished watching the fugitive w/ harrison ford.:)

That sounds super fun to do!
Great Post! Can't wait to see the video!

That sounds cool about the skateboarding thing! Never would have guessed. When is the video going to be up on YouTube? I would like to watch it! You have a lot of prosthetic legs in your house! And the flipper one would be neat to see!

Well, your day sounded like fun! Don't worry about how you look and the whole video. It sounds like you talked from your heart (not literally) so it'll be great. We're all here to support you too. "Your wild-eyed, hyperactive minions". That was a negative conotation (I think. I wasn't paying attention in LA) A posistive conotation would be... "Your enthusiastic, lively fans." Ok, Im done with my Language Arts reference. Really, im hoping we're considered the second one. Anyways, can't wait to see the video and do you have any info as to when your Running Dream book tour is?

Thanks for that inside peek into how a video is made for Random House. So glad the guys were cool and your adorable dogs were included.

Can't wait to watch the video! And read the book!!!

That is such a creative and awesome way to get shots of someone running! Plus it looks tons of fun (and cheaper than getting someone to pull you along a wheeled platform or something).

And your dogs are so cute!! :-D Can't wait for the video and the book! Does the flipper foot include a knee joint, or is it just shin and foot?