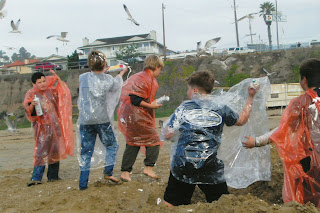 I should have said this in a comment last week, but since I didn’t, I’ll say it here: I love how all you guys went with the (kinda loser) guy thing. Something about that was really fun for me and I just want to say thanks :) More about the (kinda loser) guy later, but what I’m wanting to talk about this week is birthdays. Those of you who read last week's comments probably saw that a (definitely nice) dad requested a little birthday wish from me for his (unfortunately sick) daughter whose birthday is today. So I sent a note, and since my son’s birthday was yesterday, it got me thinking how my son has been sick on some of his birthdays, and how miserable that was for him. It also got me thinking about fun birthdays. There were two from my childhood that I remember with great fondness. My mom always baked our cakes, and one year I thought she’d had a little trouble with the baking because my cake was oddly shaped. There was this weird top layer that looked like only part of a layer but it was…I don’t know, just strange. And when I went to cut it, it was like a rock (which was not boding well for the enjoyment of this cake). But then I realized that the top layer was an upside down margarine tub, and once I removed it I discovered that inside the tub was a jewelry box with a darling little necklace. So that was really unexpected and fun and I thought my mother was very clever. The other birthday was one I had after a long battle with my appendix (which ruptured and had me sick for way longer than I should have been). My parents converted our backyard into this elaborate Wild West Adventure Land with booths and gold nuggets and activities…I remember it as being just amazing. But I think the birthday that, uh, takes the cake, was my son’s tenth birthday. Food Fight Birthday! Mind you, this was not a spontaneous chucking (and thankfully not upchucking) of food. This food fight was planned and sanctioned by adults. (Well, at least by someone passing herself off as an adult and her poor accomplice...I mean, husband.) Yup, I got this idea in my head and once it was there, there was no stopping me. I made vast quantities of rice and mixed it with mashed potatoes. I bought huge bags of dinner rolls. I bought cases of whipped cream cans. I made a huge slab of Jell-o cake. There were boxes of cookies and crackers and bags of marshmallows. The kid in me was not thinking about starving kids in Africa. The kid in me thought it was the most awesome idea ever! The day of the party, Mark and I hauled the vats of food, a table, chairs, a boom box, shovels and shields down to the beach (which was deserted because it was cold and cloudy and threatening rain). First we made the kids play some obligatory games…beach golfing, balloon volleyball, ring toss….you know. But really, the ten or so kids who’d come were there for one thing: FOOD FIGHT! So we gave each kid a poncho (because we thought their moms would appreciate that). Then Mark and I split them into teams and cut them loose to dig their foxholes and ready their strategies. And when we finally said GO, those kids cut loose. They hurled food and darted in and out of enemy territory dousing each other with whipped cream. It was wild! Completely out of control! And such fun. The unexpectedly cool thing about the aftermath of this food fight was that the food did not go to waste after all. Not that it went to kids in Africa, but the seagulls swooped in and had the beach spotless before we could load up the table and chairs. The bonus being, no clean up! My son is now 17, and most of that same group of friends will be over tomorrow for a jam session birthday party. (I’m talking music here, not strawberries.) So they’ve outgrown the urge to hurl food (I’m counting on that, anyway), but to this day they all still talk about Food Fight Birthday. If you have a favorite (or least favorite!) party story you’d like to share, I’d love to hear. Meanwhile, may your days be merry and bright, and may at least one birthday in your life be…FOOD FIGHT!
Posted by Wendelin Van Draanen at 10:18 PM

I don't know if this could be considered my favorite birthday but I defiantly remember it.... I was turn five (I think) and I decided since I didn't have many friends I would just invite my best friend and her little sister, only my friend could make it so basically the party was my friend, my sister, and me. We ran around and played in my little play house until we found a spider a decided it was time to go inside, so we ate cake and I opened my presents. It was so lame yet so fun! Your birthday is January 6th right?

My birthday parties haven't been that fun..

my least favorite b-day. We went to watch spy kids 3-d in movie theaters, but one of the girls said it was really scary and the other girls got scared except for 2 of us so we switched movies to finding nemo ( which for some while after i really hated) and guess what, the one other girl who wanted to watch spy kids with me got scared of the sharks in finding nemo and had to leave the theater during that part. Thankfully not all my b-days have sucked liked that.

My favorite birthday...hmmm.... ok, let me think about this.... I would have to say when we went Go Karitng (with real race go karts!!!!). It wasn't my birthday. But it was totally awesome. Reminds me...I want to go back there! I can't think of any other ones though............ I remember being sick on my birthday. Let me just say this: IT WAS MISERABLE.

But hey, I've had enough of colds and flus (UGH!). Like a couple of weeks ago, I got sick. And a week or so that before that I was sick! It was so annoying not being able to do anything. It was almost as annoying as when I sprained my foot while playing soccer in August. That lasted like 2 or 3 weeks and it HURT! I don't even know how I sprained it! I mean, i was running and then OUCH! I was like a lawn gnome for the rest of practice. That was no fun.... But then like the next day, my dad called and told me I could get a free ride in a small plane. I got dressed and everything and went to the airport. I limped, and it hurt SO much. But it was worth it in the end. I really missed not being able to play soccer in those few weeks. I really miss it now. I usually do it like all year. But we took a break, and I feel so bored without it. And...wow. I'm rambling... *sheepishly smiles* Sorry about that. Sometimes I just go on and on. There's really no end to what I'm saying, y'know? Especially when I'm bored. Like now... So, sometimes it's really funny. Like I sit there and talk, and talk, and talk and the person is just like: I GET THE POINT! But they are actually thinking it's real funny. Which is why I ramble on sometimes. But others it's just like unavoidable. I do like making people laugh. It's fun, I think. That you can make that person happy by doing something relatively easy. It brightens up my mood, totally. People say I have a good sense of humor. I like that. I always wonder what people think of me. Whoa, wait...hold up! I am rambling AGAIN! Gosh, what is wrong with me today? All I did was make cookies! Maybe, it was eating the cookie....Yum, sugar cookie. Ok, so I had two cookies. Which equals: Hyper Me! So that's why I'm rambling. I just can't stop going on and on...and on and on...you get the point. I have got to stop rambling! I'll shut up now. Or at least I'll try. NO ONE CAN MAKE ME!!!!! *cue maniacal laugh* MUAHAHAHAHAHAHAH Cough, cough. Who knew laughing maniacally was so draining?

Ok, I'll completely shut myself up now. I think the only way to do that is to post this comment. Now my family will have to deal with me and my ramblingness.

I dont remember having a least favorite birthday, but to tell you the truth, that may be because I dont have a birthday party every year. My parents try to throw a party but with my birthday in the summer, most of my friends are away. But my parents always make my birthday special, especialy 2008. My birthday was on 8/8/08 that year and I had eight guests and eight presents which I loved cuz eight is my favorite number. Plus I have eight best friends that year so its not like I was forbidden to invite anymore, it was purely my choice. Anyways, Food Fight seems awesome!

my favorite birthday was my 9th birthday was when i woke up in the morning to my mom saying happy birthday, i love you......... but you have to stay in your room b/c the closet next to my room "broke" in the middle of the night, and she didn't want me to get hurt. so i stayed in my room watching movies (on VHS) on my tv, but feeling strange all the while. my dad came in from who-knows-where to wish me happy birthday, and the next time my mom comes to the room to bring me breakfast, i dropped to the floor to look between her legs, and saw, my hunch correct, that nothing was wrong with the closet. "Mama!" i'd said, upset, yet amused: "the closet is fine! why won't you let me out of my room?"
"the entertainment center fell down, too; i don't want you to get hurt."
the entertainment center exsuse was ridiculous, b/c our enertainment center was about 6'5 feet tall, 2 feet wide, and perfectly stable. at that point i'd already known that she was bluffing, but i played along. to shorten it, she let me out, and after i got past a veil of streamers, i saw my whole family in the living room, and they all shouted in unison "HAPPY BIRTHDAY!!!!!!!!" in short, it was one of the best birthdays ever. even if it wasn't a food fight. and even though it was cheesy. :D