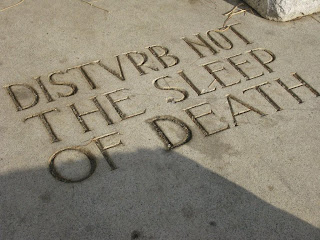 The thing with a Sammy Keyes book is that it gets very complicated near the end. Actually, it’s complicated all along, but it’s not until the end that the timing of everything matters. It’s like braiding hair, but with ten strands instead of three. You’ve got to concentrate, keep track, and pull each strand evenly because if you don’t one strand will become shorter than the rest and in the end it will mess the whole thing up. And who wants to have some awkward, ugly stump of hair poking out of your rubber band? Not me. The only solution, really, is to figure out where you went wrong, undo the braid to that point and try again. Sometimes what is really wrong is that you decided to use ten strands instead of nine. Nine is so much easier to work with. Three groups of three. It’s always like this at this stage of a Sammy Keyes book, but I always forget that it’s like this, which is maddening because it invariably sends me into a bit of a tailspin and I’m, like, Aaaah! How did this happen??? It’s also the point where it comes out that The Thing I’ve been avoiding for the whole book is the reason my braid is coming out crooked. It is the point at which I finally face up to the fact that if I don’t want a big ugly stump sticking out of my rubber band, I need to suck it up and face The Thing. Of course, first there are the phases of Further Avoidance. This week I further avoided The Thing by driving through graveyards. I really did not know that driving was allowed, but it is. It’s like driving thruogh a little neighborhood of dead people. You can wave and read the headstones and chat with your son about how peculiar the burial ritual is…all from the comfort of your minivan. It’s like being on a little ride at an amusement park without even having been charged admission. That was Phase One of Further Avoidance. I recognized what I was doing, though, so we finally did park and walk around. We had lots of questions that we made up our own answers to…because, obviously, it was easier than facing The Thing. Yes, phase two of Further Avoidance was well under way. And it continued to another graveyard which I thought would be spookier and perhaps have a mausoleum or two to investigate. This time I took both sons and we explored for an hour, answering all our questions with whatever seemed to make sense to us. Plus, there was an enormous pyramid-crypt-thing which was very impressive and fascinating, although of absolutely no use to my story. Yes, I’d entered Phase Three, and it was getting me nowhere fast. Then yesterday Mark and I drove four hours to see a friend in his first starring role in a play—perhaps you’ve heard of it? “Sweeney Todd, The Demon Barber of Fleet Street.” Yes, quite right—it’s the one where the barber slits his customers’ necks and turns the corpses into meat pies. Pail after pail of “blood” on stage. Lots of demented screaming. Lots of death. Oh, and an asylum. Then we drove four hours home. On the drive we “talked plot” and I told Mark about my issues and quandaries and ugly, crooked, stumpy braid, and how I just have to finish this book because everywhere I turn it’s all death-death-death! So we talked and talked and talked, and by the time we got home I knew that I had to unbraid and quit avoiding The Thing. So today FINALLY, I made an appointment with the manager of the cemetery and watched them bury a body. The reason I had such an aversion to this is because I went through it once in real life when we buried my brother. I was so grief stricken then that I didn’t notice anything technical about the process—who cared how it was done? But now I really needed to know, and I was just…afraid. The nice thing about today was that the manager and his crew had a great outlook about what they do. Each of them on their own said, “I love my job.” They’re regular guys who see their role at the cemetery as important and valuable, and the manager was very philosophical about the historic significance and importance of graveyards. Plus, one of the crew has a daughter who reads Sammy Keyes, so that didn’t hurt! So it’s with a big sigh of relief that I tell you I’m ready to unbraid and give it a final go. It’s all there, it’s all good, I just need to go back and make it tight!
Posted by Wendelin Van Draanen at 7:14 PM

I'm glad that you got up the courage to face The Thing! I'm not sure that I would've been able to do that, if The Thing was the snag in my braid.

Keep on going! I'm rooting for you from my tiny corner of the universe. :-D

Darn it, Wendelin! I haven't even read the Wedding Crashers yet, and you've got me looking forward to the one after that!

Good luck with the stump in your braid. I know exactly how you feel, or at least to an extent. I've been avoiding going back and reworking my own book, even though it needs it (one of the scenes is in the wrong place, and that set's everything else off course, and that means that everything else has to be reworked, too!)

Anyway, good luck with Sammy Keyes, and I hope you don't have her getting into too much trouble (but of course, you do).

AHH, I can't wait to read Sammy Keyes... I'm reading the series over again for a fresh start!
YOU rock!

Just letting you know, Wendelin, that your blog is what keeps me from going nuts waiting for SK14 and all of the later SK books coming out. Thank you so much!!
PS: What happened to the Sammy Keyes promotional-shoelaces thing? Everytime I put my shoes on I think of those shoelaces!!!

people like you, who face the Thing and then talk about it afterward reflecting or whatever, are who inspire me.
Like really, this blog is one of the only things that keeps me from deflating like a balloon every week.

I have my own Thing too to face. My Thing is how to face the people at school who have no feelings, who don't understand that we're ALL people too. People like Heather.

Like Kailee at my school. She's my biggest Thing. She completely ruined my birthday by passing around this card where all her friends signed it saying how much they "love" me etc. And some of the crueler boys even put heart sound their name as a joke. And when she gave it to me at lunch, they all just turned and watched, expecting me to break down or something but instead I just played along and took it. Normally I wouldn't have taken it but since this card was phyical proof to what they were doing, I took it. And I didn't want them to get away with this (it doesn't soun so bad here but it was REALLY mean when they did it. Some freak jock named Cody who was part of this was about to has an accident cuz he was trying so hard not to laugh. And Kailee was walking all around the cafeteria clad in her gross yoga pants that are way too tight asking people to sign the card or whatever. I swear she's too much like Heather. Her pants are waaay too tight ahahah).
I didn't want them to get away with this because if I did, it would set a precedent for the future: that they can pull a stunt like this again.

So, I thought about your blog. And I faced my Thing. Since I'm not as clever as Sammy to do something cool and witty like use the PA System (my vice principal would start screaming and suspend me most likely), I decided to do something else. So I talked to my favorite teacher in private (ironically the language arts teachers) and told her about the card and etc.
There's way more to the story but I won't go yapping it here.
There was a relevant point to this actually:
I faced my own, um, Thing, right? I've never actually bothered to prove to Kailee that no she can't get away with this stuff. I usually just ignore them.
I don't know but I did some things I normally wouldn't have done today and I guess I could say that even though our "things" were so completely different, we both faced them.


And omg. I want to see a burial too. Wish I could... I'm a generally morbid person so, it's not a surprise. :P

ONLY TWO NOW. :D TWO DAYS LEFT. :D
And omg I don't think Heather would ever do this, but.
Kailee apologized to me. :/
Anywaaaaaaaayy whatever, right now I could care less about anything but the fact that there's less than 48 HOURS til THE MOST ANTICIPATED/AWAITED BOOK OF THE YEAR (and part of 2009).
It smells like poo outside.:p but I am enjoying this beautiful October weather while I await for the day to arrive.
:D :D
Oh. And the post for NEXT Sunday (the Sunday after WC comes out) better be about Wedding Crasher (or at least ask us about it) so I have real reason to discuss it. c:
Haaaapppyyyy <3