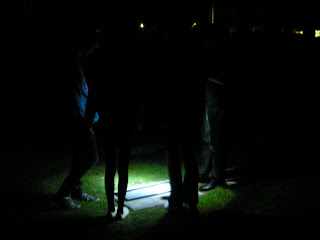 Happy Halloween! Sammy Keyes and the Night of Skulls starts with the line, “I love Halloween” –which I do! We live down a long driveway, and don’t get much action at the door, so we’ve been known to go seek it. We’ve sat at the end of the driveway (dressed scary, of course) and given out candy to kids (after scaring them, of course). We don’t always aim to scare. One year my older son dressed up as Slash and played out at the end of the driveway by the snake pit of candy. That was very cool. But this year—in the name of authenticating research—I took a van full of “kids” to the graveyard and snuck around and checked out the pyramid tomb and had a spookin’ good time. My son’s girlfriend wanted to stick close to Mark and me because she hadn’t been to a graveyard before and was kind of creeped out and scared, but first chance I got I hid, then popped out and screamed and scared the stuffing out of her. She trusted me and I gave her a heart attack. I am so bad. On the way home I was thinking about epitaphs and decided that if I were to have one it would say (my name and all that stuff) and then “Rode Shopping Carts ‘Til The End.” That’s how I want to be remembered. How about you? Anyway, despite the spooky adventure in the boneyard, I’m pretty elated (can you tell?) ‘cause I FINALLY made it to the end of Night of Skulls. I sort of hold my breath through the whole process because I really don’t know until I write the last chapter whether the story will actually work. With Sammy it’s such a complicated juggle and the theme has to hold everything together. Plus Sammy’s got to have that moment of clarity about what this has all been about. It’s that moment that gets to me, and really, that’s what I drive for throughout the book. So last week Mark tattled in the comments that I’d been crying, and well, yeah I’d reached that moment and it was such a relief that it had all worked out. Well, I was dealing with a complex barrage of emotions about life and death and friends and family, but I’m blaming it on that moment of clarity. So even though the story has several rewrites yet to come, this is the part I’ve come to love. Plus I’m happy to be crawling out from under this rock. I have been such a recluse, trying to get this book finished! Who knew this “Halloween book” would wrap up on Halloween? Pretty cool. So here’s hoping your night was as fun as Sammy and Friends, and that… Actually, I take that back.
What I should say is here’s hoping you had a safe and sane Halloween and didn’t take any shortcuts through graveyards! Now let’s hear your epitaphs. (And don’t get too serious on me—I might cry!)
Posted by Wendelin Van Draanen at 8:22 PM

Moments of truth and clarity always come as shocking--shocking in that everything seemed so simple, like DUH the weird guy in the ski mask was the shifty accountant in the bank. (just going out on a limb, here)

Ha-ha! Graveyards are perfect for scary things and people (not that you're scary--but that moment must've been perfect :-D). And yes! a tiny first look at Sammy Keyes and the Night of Skulls? Yes? Unless you're going to change the first sentence?

I have no idea about what's going to be on my gravestone. If I even have one. You never know what the future will bring. Hey, maybe I'll use that as an epitaph! Or "Let the peacock fly." (The Other Guys, anyone?)

I don't necessarily believe in halloween, but I am looking foward to Sammy's halloween night for a second time; I really hope Billy's going to do some prank on Sammy, b/c Billy's billy, and he's the bomb-digidy.

Hmmmm, my epitaph, huh? I may put "Read On!". But not likely. I would most likely ask in my will for a jar of nutella to be put next to me, and on the epitaph to be put "I'm still enjoying nutella!" or something cheesy like that. JK. I can be sooooo lame.

"She kicked the bucket with a smile on her face and a song in her heart. She might have gotten a little carried away with the music..." :D. If not, that I was real from the start and to the very end, that I never took any bull from anyone, and had great taste in books and shoes. Or that I loved and was loved, and knew that was all that really mattered in the end... (sniffles) But I think that sounds too serious!

AHAHAHAHAHAHA! She trusted you and you gave her a heart attack...I would've done the same thing. I wish I could go to a graveyard at night on Halloween, even though I don't celebrate it. My older cousin used to tell me, when I was little, "Don't go to a cemetery at night, cuz ghosts come out to kill you, yada, yada, yada."

I actually believed that jerk and I was obsessed about dying for a year. Actually, yestreday was his birthday. He turned seventeen and for the first time ever, I SCARED him. Finally...he was getting annoying, being o heartless and scaring ME all the time...

Eleanor Grace Johnston-Carter
March 13 1999 - (whenever I die)
She was the evil moosinbaa (or white ninja by night)who loved the evil eskimoo since they met in first grade... She will remain in our hearts (and under our floorboards) forever....
“You know you're in love when you can't fall asleep because reality is finally better than your dreams.”
- Dr. Seuss

Me and my friend alex have our epitaphs all planned out to match each others. :D
alex's is, "here lies the most amazing human on the planet. she was a gazelle in the midst of a million moose. she was loved by everyone and only because she majorly sucked up to adults in her sweet high pitched snow white voice...yo gotta love her. RIP"
and then MINE would be next to her's and it would have an arrow pointing to her's saying, "Cant top that."
ahahah. Okay, maybe that's not REALLY what we'd do but it was an interesting discussion.

My REAL epitaph would probably some song lyric or whatever. Probably an MGMT song lyric, too, because they have serious issues with making the strangest melancholy and indie music that it's just insane of a thought that they even have, like, real human lives other than making weird music videos where they are crawling around white rooms making rainbow smoothies.


I'm starting to ramble. Sorry? Haha. I'm being spammed on my formspring, which is really quite entertaining. Who knew that Spacebars and Caps Locks buttons had an affair. ? Ahahah.

Just like you when I *grow up*, I meant.
I sounded like such a creep saying that when I reread it. Like, Arnold Schwarzenegger telling Chuck Norris he wants to be just like him.

Not that I'm Arnold Scwarzenegger or yor Chuck Norris or anything. I was just saying, it sounded weird.

MY SISTER USED TO SCARE ME LIKE THAT WHEN I WAS LITTLE. well, not in a graveyard, but in the bathroom.(which was at the end of the hall)

my epitaph:
Life- as we know it, is greater than it seems. don't look at it sideways as it spans through the years. STARE AT IT HEAD ON. face it, dare it, SURVIVE IT. this epitaph is not really deep, BUT REMEMBER THIS IS WHAT I HAVE DONE... until i crashed. oh well.

Hmmm, my epitaph should be a list of annoying things I plan to do. Example: In the dressing room stall thingamabobs, pace back and forth and say in your best posh voice, No daaaah-ling, that doesn't suit you at all daaah-ling. Red just isnt your color! OR Find the loudspeaker at TARGET and yell something wacko like, "A VAMPIRE BIT ME! RUN FOR YOUR LIVES!!!" Uh g2g. Im going crazy

Haha that's so funny! Some friends and I were thinking about what ours would say. I was watching wheel of fortune.. xD.. and the main host guy was all like ..I'd want my epitaph to say R_P
..."can i buy a vowel?"
hehehe
ANYWAY! haha i decided that it would be awesome if mine could say
Alexandra Martinez
is chillin' with Jesus
:) That of course just based on my own beliefs and convictions, but yeah i think that fits perfectly:)haha
I hope finishing Night of Skulls goes well!! :) Thanks Wendelin!

i need to know when this book signing in chicago is! must go! anyone know?

Sounds like you had a fun Halloween! I cannot wait till SK14!!! Mine would read:

Alexa (Not gonna say my last name)
May 20, (Not gonna say the year)-(whenever I'm gone)
"Time, life, is a precious gift and should be used as such. Live your life, spend your time, and have no regrets when you die. Remember me always"

How did that sound? Kinda funny, I never even thought about that until now! I am like so late on commenting! I have been so busy :)! But Halloween was awesome! I went to this one house at the end of a long driveway...and, well, to make a long story short I jumped. And then almost tripped on my shoelace :D! I love Halloween!!!!!!!!!


anyway, i wanna be burried behing toys r us (if thats ok w/ the owner) and i want my epitaph to say:


(i torture my 20 year old cousin with smackng him with my fist, a pillow,or banana. he's super jeolous of me cuz im better than him and beat him at EVERYTHING!)