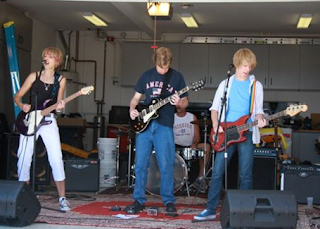 I've been experiencing an unusually long streak of happiness. I'd say I don't know why, but I think maybe I do. And it's actually rather counter-intuitive, considering I've just had another birthday, and I've had a long (somewhat notorious) spell of hating my birthday. I think this happiness comes from a sense that there are good things right around the corner; that life is ahead of me, not behind me. Not the usual sentiment of a woman my age. Granted there are lots of things slated to happen in 2010 (like the Flipped movie!) but they will come and go, and this feeling seems deeper and stronger than that. It feels like possibility. Like lots of new, unexpected things are about to happen. Who knows what? I almost don't care what. I just like the feeling of possibility. Now, I think part of the reason I feel this way is because my family had a really wonderful Christmas break together. Mark had time off, and the boys had vacation from school and they got along great. They went shopping together, did homework together, slept in the bunk beds and yakked through the night. They seemed to really appreciate each other, which made me so happy. I've told them both since they were small that my big wish in life is that they will be friends--as children, but especially as adults. It's the one thing I want more than anything else in the world, because I think with that all the other hurdles they may face are manageable. Also, we don't live a life of big entertainment. We don't even go to the movies that much. Mostly, we entertain ourselves here, and one of the things we do is "Family Band". My younger son hates when I call it that because it sounds so lame. So the rest of us call it that, just to see him pull a face. Our "official" band name is Thing 2 (because all of us are second children, except for our first son, but he got out-voted). We really should be The Parsons Family, but that sounds cheezy. You think The Partridge Family when you hear The Parsons Family, but we're like The Partridge Family meets Metallica. We're loud. Oh, and (little detail) we're a real band. Anyway, this vacation we raised the roof quite a few times, and recorded a new original ("Reputation"). Mark just mixed it down tonight, and it's SO much fun (and it totally rocks). Maybe I'll upload it and provide a link next week if anyone's interested. Double-anyway, playing loud guitar is my therapy, so I got a lot of it this break, which must certainly be contributing to my happy state of mind. I think everyone needs some sort of creative outlet to up the happiness quotient. Or at least stay sane. Write, paint, sculpt, shake the walls with a Marshall amp...something. I really think the two things that keep me sane are running and my guitar. Like Evangeline in Confessions of a Serial Kisser, plugging in an electric guitar transformed me. Gave me an outlet for rage and joy and pain. Triple-anyway, Mark plays the drums and until a few years ago, our kids used to tell us to TURN IT DOWN! How backwards is that? But now they play with us (lead guitar and bass) and they don't think it's weird or uncool to be in a band with their parents. They like it. I just shake my head in wonder at that. I have the best kids. The best husband. The best family. And it makes me happy. Really, really happy.
Posted by Wendelin Van Draanen at 8:40 PM

Yay! I'm happy that you're happy! Hope this happiness will be remembered in times of unhappiness.

wow, I wish my mom was as cool as you. I mean, you and you're husband sound like the coolest parents in the world! my parents are very business-like. my mom's in investor relations (whatever that is) and my dad works at Wells Fargo and wears a suit and tie every day to work. and you should put a link with Thing 2's music! that would be so cool if you guys made it to iTunes!
well congrats on all your happiness!
BTW, can't wait for the new SK book!!!!

Wendelin, you just upped MY happiness quotient with your blog post.
Rock on!
Donna

I'm glad you're happy! I play in a band too with some friends but its for fun.. like a hobby. We're not really planning on doing anything big with the band cuz its just something we like doing for fun. :]
Oh! And I just raided Casey's room. I stalk him. lol, its just a post on my SK blog explaining my escapade in his room.
Anyways, glad your happy!

Dear sammy4ever -- I love the picture of the shoes in the leaves...nice! About your comment...I'm sure if you were my daughter you'd have complaints about me :-) Everybody does about their parents. I'm sure yours are doing their best to give you a good life. I think a parent's "best revenge" is seeing their kids become parents and the consequent awakening of understanding and appreciation. Being a good parent is the toughest job you'll ever have, and I think we all do our best in our own way. So give your parents an unexpected hug sometime soon and tell them you love and appreciate them. I guarantee it will make them happy for an entire month :-)

When you said that you wanted your sons to be friends- as children and especially adults, it reminded me of my mom. She tells me and my sister that(I'm 17, she is almost 19), and we struggle with getting along sometimes, but knowing how happy it makes her makes me try harder. Thanks so much for the reply to the email, by the way! I'm working on another :). And I would love to hear some of your music! I love rock, so I'd love to hear the music of my favorite author in my favorite genre :). And your happiness is based on what really matters, which so many people struggle with. They let the little things of the world around them determine how they feel, ignoring the people who are there for them THROUGH the little things. So congratulations on not just being happy, but being happy for all the right reasons :). I'll try to do the same :)

That's so cool!
Its real great that your family has a band together.
In our family we have scrabble night.
Yeah we're nerds! :)
I am glad your HAPPY!
I am too!

Thank you all for the comments. You're a really great group. Oh, and Pooja Dimba, we want to know if that's your real name. Mark and I think it's so cool! Have a happy weekend, y'all :-) See you at tomorrow's post.

This has nothing to do with the blog post, but I LOVE YOUR SAMMY KEYES BOOKS! i've read all of them, and can't wait for a new one to come out! Talking to you would be a-ma-zing.

I heard Nathan Kress was playing Casey Acosta. Is he? *sad face* Please say no and say Gaspard Ulliel is going to play him- pleaseohpleaseohplease!
Okay, maybe Gaspard is a little too old for Casey (he's like 22). But he'd be a great older-Casey!
PS- this may freak you out a bit but today I saw 'The Lovely Bones' and now I'm inspired to write a Sammy Keyes fanfiction where Sammy dies. I know I'm killing off your character. My sincere apologies.
XOstephy
PS- I really dont want Nathan Kress to play Caseeeeeeeyyyyyyyy! Casey is supposed to (no offense to Nathan) look good. xC

I am in awww of you!

Aaaaawwwww! Thanks for the smile Marjorie :-)

Okay, here we go. As promised, links to music. (or the URLs, anyway, you'll have to copy and paste, 'cause this is a comment, not a blog entry, sorry!)

If you're going to listen to just one, I'd select REPUTATION -- it's the newest, and probably the best.

And for those of you who can't get on myspace:

(the trax distort on the high end at this site, but it'll give you an idea...)

Rock on! (And thanks for your interest!)

Reputation is SO COOOOOOL! It reminds of the movie, School of Rock, and the good ol' days of classic rock (Led Zeppelin!!!). Seriously! It sounds just like rock should sound (if that makes any sense).

My favorite was Won't Let Go! Especially the second verse :) You all rock :)