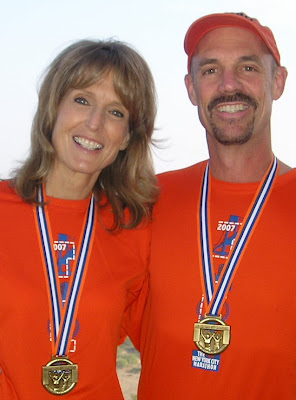 I know Wendelin’s already mentioned this, but the support from our friends (both old and new) was really wonderful, and helped make this entire adventure something we will both remember for the rest of our lives. And of course the marathon itself also contributed to that feeling. I’ve heard for years that the NYC marathon was unlike any other, and now I know what they mean. (Example: when was the last time you saw blind people running down the street? And I mean running. The Achilles Track Club has volunteers that help disabled athletes compete in the event, and we encountered more than one sightless runner trucking along, tethered to a sighted runner giving them guidance. Kind of makes you feel silly for complaining about a sore hamstring.)

The support of the spectators of New York was something else. (Actually, the word ‘spectator’ doesn’t do them justice, because these folks were seriously involved!) There were people out in force along almost the entire route, and many of them were there for hours, cheering on the runners. When we came off the relative quiet of the Queensboro Bridge and finally entered Manhattan sometime after mile 16, the sonic impact of the crowd lining 1st Ave. was amazing. I turned to Wendelin with a big grin on my face and yelled “This is the reason people run this, right here…!”

(As for the results, we were especially stoked that Paula Radcliffe was the women’s marathon winner, as she was coming off having a baby earlier this year. Not that we actually saw her or anything, as we were slogging along in the middle of the pack while she and the other elites were flying along a couple of hours ahead of us, but hey – we were in the same race!)

The post-marathon revelry was really nice. A small group of us met at “Harry’s Bar” (gotta love that name) right after we finished. We’d planned to go up to our room and shower/change before joining them, but we ended up attending in all our sweaty glory. (We just popped in on our way up but I could tell that Wendelin really needed to eat, so we sat down ‘just for a minute’, which turned into two or three hours…) Following this we did the ‘shower-change-eat (again!)-sleep’ routine, then got up Monday morning and had a great breakfast at Sarabeth’s. Did a little window shopping, then headed out to the airport so that we could be home Monday night… we thought. To sum up a long boring story, from the time we arrived at JFK until we finally landed back home it was almost 24 hours (due to a series of airline misadventures that would have been almost comic if we hadn’t been so tired).

But here we are, happy to be home but also thrilled to have had such an amazing, uplifting time as your faithful ETRTR correspondents. Wendelin will touch base soon with an update on the program.

Cheers!
Posted by Wendelin Van Draanen at 6:48 AM

Thank you SO MUCH for this post. I loved it. Thank you for having the courage to be real......
Samantha
Home Security Systems no CREDIT CHECK everyone is approved

I enjoy reading your blog. It is great to find someone who can find the fun things in life!


--
Jenifer
Are you scared to be alone at home need security