It’s been a funny evolution, one that underscores how time, distance, and a study in perspective can change your view on things. Many of you already know that it took me a long time to get my first book published. A long time. And during those years I viewed the mailbox mounted inside the porch of our rundown little rental with mixed emotions. Mornings, when I’d clipped outgoing mail to it, it held my hope. Evenings, when I’d come home from work and pull bills and publishing rejects from it, it deflated me.

Still, my husband and I began telling each other we had put “hope in the mail” when we sent something off to editors and agents in New York, and in my pursuit of getting a novel published, I put hope in the mail consistently and persistently for ten years.

I also received rejections from New York in that box consistently and persistently for ten years. 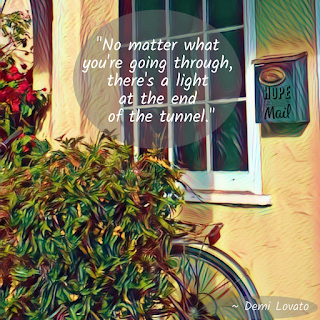 During that time, the phrase expanded to mean doing something, anything, that created possibility. It meant overcoming your fears, it meant putting yourself out there. Rejection is hard on everyone, but it’s especially hard when there’s an emotional component to it. Love, of course, tops that list, but creative endeavors land not far beneath it. Creative people expose their heart, and rejection can pierce it, leaving your creative self to shrivel up and die if you don’t find ways to patch yourself up and try again.

For my husband and me, putting hope in the mail--sending out a query letter, making a phone call, filling out an application…anything that would buoy us with the belief that good things might happen—is what got us through hard times and got me to my eventual publishing “yes.”

Living that way was my lifeline to success.

When I began sharing my story at speaking engagements, I would encourage the audience to put their own hope in the mail. It didn’t matter what walk of life they were on, what mattered was that they reached for their dreams, that they took the steps—especially the ones that scared them—and that they moved forward bravely, creating the possibility for good things to happen. I started to see that because things hadn't been easy on me, it help others who were struggling believe that they, too, could reach their goals.

Miraculously, I began looking back on those ten years with gratitude.

In time, my friends began adopting the phrase, and other people began using it too. “I put hope in the mail today!” they’d tell me, and with it always came a sense of excitement.

Twenty years in, over thirty novels later, people who’ve heard me speak convinced me to write a book centered on this idea. And, big surprise, it's titled Hope in the Mail. Yes, it’s about writing, but, as the subtitle suggests, it’s also about life, and it’s for anyone who could use a little boost moving forward in their own creative pursuits. How do we find the time for our creative passion? Why does everything else manage to push it down the list, until eventually it’s been pushed off the list entirely?

My wish for Hope in the Mail is that it inspires anyone with a dream to pursue that dream bravely, and that it helps give them the fortitude to create possibility--something that will move them forward with hope in their heart. 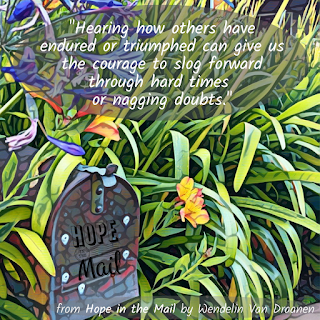 The book itself won’t be available until January, so it may seem curious (at least to those outside of publishing) to be talking about it now, but the reason I am is to let you know that, meanwhile, to keep you inspired in the pursuit of your own dreams, there’s a new Hope in the Mail on Instagram. It starts today, and will deliver a regular dose of hope through mailbox art featuring inspirational quotes from a diverse cast of people. I invite you to follow along, and please tell any friends who could use a boost to meet us there.