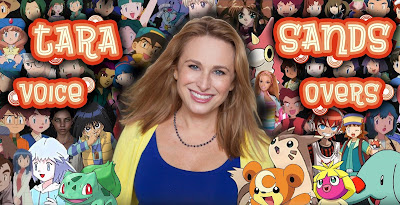 For the record, Tara is awesome. Kind, generous, excitable, and funny. She also adores her rockin’ grandma, which, come on, says a lot.

The Sammy Keyes books came out before the audio recordings did. My kids were too young for Sammy, but I tried reading them aloud to them anyway. Let's just say they didn't have the enthusiasm I'd hoped for.

But when the audio books came out, I let Tara do the talking and it suddenly became fun. For them and for me! They wanted to hear more. And then when my sons discovered that Tara voiced for Pokemon and Yu-Gi-Oh, well, they were over the moon excited to listen. They looked at me differently. “You know Tara Sands?”

The cool thing for me was, the audios hooked the boys on Sammy. When the new books came out, they wanted to know what was happening in Sammy World now. And since the audio books weren't out yet, they broke down and started reading them. That’s right. I have Tara Sands to thank for getting my own kids into Sammy Keyes.

So, if you haven't already gotten to know Tara, let me give her an official introduction:

Tara can be heard as over 50 characters on the original “Pokemon” series, including Bulbasaur, Richie, Jasmine, Oddish, and Tori. Other favorite roles include Mokuba Kaiba in "Yugioh",  Circe in “Generator Rex,” Summer in "Barbie: Life In The Dream House," Kari in "Digimon Adventure Tri," Karla in "Gundam Thunderbolt," Kombu Infinity in "One Punch Man," Cynthia in "Pokemon Generations," Anna in "Shaman King" and lots more.

Tara has narrated over 150 audiobooks (including the Sammy Keyes series) and for over 100 episodes, Tara was the on-camera host of the Cartoon Network show “Fridays.” There, Tara interviewed dozens of celebrities and had more on-camera food fights than she cares to remember! She has received numerous Earphones awards from Audiofile Magazine and has been nominated for Audie awards as well.

And now, on to the interview!

Welcome to the blog, Tara! We have a lot of Sammy Keyes fans here so we appreciate your taking time to chat with us about what it’s like to voice the audio books for the series.

WV: Walk us through the audition process for a voice artist. How did Live Oak Media select you to be the voice of Sammy Keyes?

TS: It was a long time ago, so I am a bit fuzzy on the details! I remember Paula Parker, the amazing director of all the books, asked me to audition. I am pretty sure I just read a few pages into a tape recorder!! And then I was lucky enough to get the job!!

WV: How did you prepare to record the first book – Sammy Keyes and the Hotel Thief – where all the characters were brand new?

TS: This series is unusual in that the producer and director were very involved in helping me prepare before we got into the studio. We had some phone conversations about what we envisioned for the characters’ voices, and then tweaked them a bit when once we started recording. Back then I would highlight every character’s dialogue in a different color! Now I use an ipad to read off of and I do make some notes, but nothing that intense! I was very new to audiobooks when I started the Sammy Keyes series, so that preparation was really helpful.

WV: You’ve just recorded the sixteenth title – Sammy Keyes and the Showdown in Sin City—how do you prepare to record a Sammy Keyes title now? Do you revisit previous recordings? Do you read the entire book before entering the studio?

TS: It is crazy to think this is Book 16!! Yes, I definitely read the book ahead of time and I make a list of all the characters who appear. Then we cross reference that list with characters from the older titles and listen to sound clips of their voices to get them right. A lot of the kids in the books have really matured or changed over the books, like Casey , so I try to make his voice reflect that change. WV: I have a newfound appreciation for what you do after voicing the bonus pages for the new Flipped audio. It’s not easy! I wasn’t even doing any characters--it was just me being me—and about twenty pages took me a big chunk of the afternoon. On average, how long does it take you to voice a Sammy Keyes book?

TS: It depends on a few things….if there are a ton of characters it takes a little bit longer. The pacing of the scenes also makes a difference. For the high energy scenes I definitely read faster, and for the more emotional scenes I pace it a little slower. If the voices are hard on my voice (like Officer Borsch) I need to take a lot more breaks to rest my throat! The general rule with audiobooks is that it takes us about 2 hours to record 1 hour of finished audio. So a 7 hour audiobook would take me about 14 hours in the studio. When the writing is good (like yours) I make less mistakes and can go a bit faster.

WV: The cast of Sammy Keyes characters continues to build across the series. Do you have a method, or maybe an ‘audio bible’ that helps you keep the voices straight from book to book?

TS: Well, for many years we didn’t and would have to have stacks of cds and time code lists to go back and listen to each of them. Then last year I took a few hours to make mp3 files of all the major characters and now I have them in a handy dandy folder on my computer.

WV: It seemed that you especially enjoyed voicing Sammy Keyes and the Power of Justice Jack. Was it the character of Jack? Billy Pratt?

TS: Yes! I love Billy Pratt!!! He is exactly who I would have been friends with. I love how kind he to Sammy and how he is up for anything. His relationship with Marissa was a really interesting story line. I imagine he and Sammy staying friends as adults. They would make a good couple.

WV: What have you most enjoyed about the evolving series storyline?

TS: Honestly, I love the writing. I believe that these are real people and I find them incredibly relatable.  You have given them solid histories and back stories to explain why they are who they are. I haven’t stayed with any other series as long as this one and it has been so much fun. I get excited to see what happens next and I know that you don’t write typical “happy ending” stories which I really appreciate. I also love the Grams/Hudson relationship.

WV: Does character evolution mess with voicing those characters?

TS: “Mess with” is such a strong way of saying it!!! But yeah, in this last book, I had to figure out how to sound like Heather without being mean. That was tricky. She started sounding like Marissa at times, and Paula would make sure I stayed on top of making them different.

WV: You attend lots of Cons and seem to have a really good time doing it. Which character(s) do you voice that create(s) the most fan fever to meet you?

TS: I’ve been lucky to do a lot of  cartoon voices over the years, but the one fans are most excited about is Bulbasaur from Pokemon. It’s so much fun to watch their faces when they ask me to do that voice in front of them – which is especially funny since all he says is “Bulbasaur”!!!!

WV: You’ve voiced all but the last two books to go in the Sammy Keyes series, and it suddenly occurred to me that you probably don’t know how the story ends…or even that the last one isn’t in the voice of Sammy Keyes! I’m not sure how Live Oak will choose to approach the last book, but regardless, it’s almost over! Any reflections on Sammy and the broader purpose or value of these stories, or the series as a whole?

TS: Wow!!! I didn’t know that! I purposely haven’t read ahead! But now I need to!! When I heard you had written a final book, I was so sad. But then I remembered how much I loved re-reading my favorite stories as a kid and I know that’s what people do with these books. It’s especially fun re-reading a series because you know where it’s going and you see all the smart little hints the author planted along the way. So, while I would love it to go on forever, I do love a great ending! I feel really lucky to have been involved since the beginning and hopefully I’ll be at least somewhat involved in the final book.

WV: Thank you so much for your contribution to this body of work. I know you have some ardent fans inside the Sammy Keyes community. Maybe someday we’ll have a Sammy Con! You game?

Isn’t she awesome? If you’ve read through the entire Sammy Keyes series and have been missing our girl, try listening to the audio books. It's a whole new (and really fun) experience. You can get the physical CDs through Live Oak Media here, and they're also available as downloads on Overdrive and Audible.

As always, thanks for checking in. See you in the comments!
Posted by Wendelin Van Draanen at 7:37 PM

I am a HUGE fan of Tara Sands - I am always listening to audiobooks, and she is absolutely one of the best there is. This was a fascinating interview, because I never knew (and always wondered) what sort of preparation goes into the reading (the performance) of a book. I laughed out loud when I read that Ms. Sands has to rest her voice if there's a lot of Officer Borsch in the book! She always puts 100% into his (and every) voice, so I have wondered how hard that is on her! I suspect the biggest challenge of all was an early softball games - for heaven's sakes, there was a HUGE cast of characters playing in or watching the game, including coaches, insulting catchers, and a GERMAN EXCHANGE STUDENT! What terrific fun to listen to! Ms. Sands also delivers beautifully on the emotional parts of the book - Sammy really gets challenged at times (sometimes by herself), and is sometimes deeply hurt - Tara handles all of this so well - it's a great combination of powerful, insightful writing AND performing. Thanks for this wonderful interview! I can't wait to buy Sammy Keyes and the Showdown in Sin City! (By sheer coincidence, I just downloaded all 3 of the first Sammy Keyes books onto my ipod earlier today so I can happily experience them all again until Sin City comes out, which will hopefully happen around the time I finish Justice Jack!)

Thank you for conducting and sharing this interview! I guess I'm like your sons because my interest was definitely piqued when I saw the name "Tara Sands" in the title of this post haha. I think it's really cool that the Sammy Keyes audiobooks were able to get such a talented voice actress to record them.

Wendelin i always look forward to your articles. This woman Tara is so amazing. She has actually motivated so many kids into reading. This concept of audiobooks is so amazing and Tara has put life to this idea.