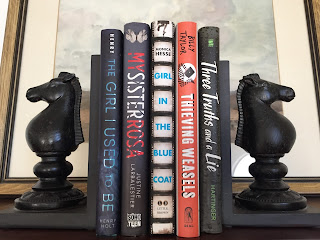 We weren't allowed to talk about it. I guess that falls nicely under the mystery writer umbrella. After all, you're not supposed to know who-dun-it until the end of the story.

But since the 2017 Edgars were announced at a fancy-pants banquet in New York City on Thursday, I'm now permitted to tell you that I dun it. Or, at least, I helped.

I was on this year's Edgar committee in the Young Adult category. There were five of us. I was not the ringleader, and I'm glad. This was my first time serving on a committee like this and it has given me a broadened perspective (and newfound appreciation) of what goes into selecting a handful of books from the many titles submitted.

You wouldn't think there'd be that many young adult mysteries published in a given year...and it's true, there aren't. But publishers submit books that are thrillers, or suspense novels, or any story, really, that has some tangential mysterious element to it. So you wind up with all these books that don't really qualify as mysteries, but you read them anyway because there must be a reason they were sent in for Edgar award consideration, right?

So...what do you do if a book is really good, but only tangentially a mystery? Should it be considered for "best young adult mystery of the year"? I sure didn't think so, so I asked several times for clarification. What definition of mystery are we using? Is a thriller eligible, even though we know the whole time who the bad guy is? Is a simple suspense story a mystery? Does there have to be a central crime?

Having been on the other side of the process for sixteen Edgar cycles (the span of the Sammy Keyes mystery series), I would now say that - strictly for the purpose of being considered for the Edgar - I  would not want a mystery I'd written to come out in the fall. Books to be considered for the Edgar are all published within a given calendar year, so titles start trickling in early in the year when committee members have time to read-read-read. By fall, there's a deluge of books arriving, and all must be read before mid-December while the holidays and other end-of-year pressures are all bearing down on you.

It becomes a power-read process...not something you're really hoping for as the author. You want people to savor your book. To enjoy it! To revel in the mystery and try to puzzle it together, not just power through it.

After reading the submissions is complete, it's time to vote. And I would tell you more about that but there's the section in the Rules for serving on an Edgar committee that states "Any discussions among committee members may not be shared outside the committee."  So I'm not able to really tell you anything other than that the winner  - Girl in the Blue Coat by Monica Hesse - was very high on all our lists. We were unanimously happy with the winner, which (I've heard) is not always the case.

The other nominees were Thieving Weasels (by Billy Taylor), The Girl I Used to Be (by April Henry), My Sister Rosa (by Justine Larbalestier), and Three Truths and a Lie (by Brent Hartinger).

The Edgar Award "Dress to Kill" banquet is always a fun night. For each and every one I attended as a nominee for a Sammy Keyes book, I was game to fulfill that instruction the best I could...but always in a dress that was $29 or less. It started that first year (when I won for Sammy Keyes and the Hotel Thief) and wore a dress I'd bought for $29 at a "vintage" store. After that, the price tag of the dress I'd wear to the Edgars became a fun $29 tradition for me. And now, in addition to fun stories I have from each and every Edgar banquet, I also have one for how I found each and every $29 gown. 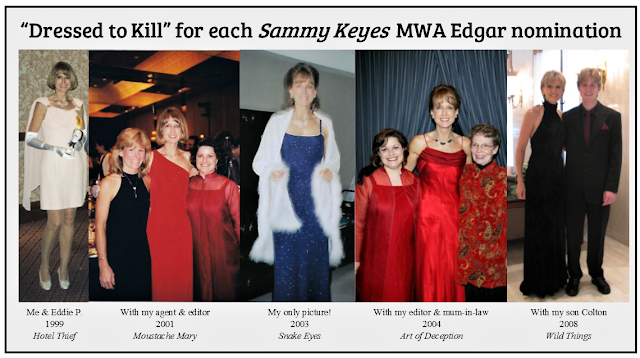 "It's just an honor just to be nominated," is also very true. Especially now that I know how crazy-many books get submitted for each category.

But let me also confess this: It's a lot more fun to win!

And both are much more thrilling than serving on a committee. I'm glad I did it...and grateful in a brand new way for those who served on committees in years past when there was a Sammy Keyes book lurking in their mile-high stack of reading.

I loved reading the post. You never cease to amaze. You are always taking on a new and different challenge, and it's fun to read your latest adventure/endeavor. You were a wonderful choice for the Edgar committee this year. I can only imagine the time you put in reading and then deciding on the winner. I have shared Girl in the Blue Coat with classes during book talks and felt it was one of the best books (along with Lincoln Jones) published in 2016. GREAT POST AND TERRIFIC SELECTION FOR THE EDGAR!

To be honest it set on my to-be-read shelf for a long time after I bought it because I kept stacking others on top of it, but once I started it I couldn't put it down.

Thanks for giving us a little peak on what occurs when these awards are well awarded. I have always wondering how the process goes and I never realized just how many books you have to read but I am sure it was fun!

I hope you all have a wonderful week!

Interesting post, loved the way you wrote it. Need to share it with others as this stuff is really superb. Thank you for sharing it with us