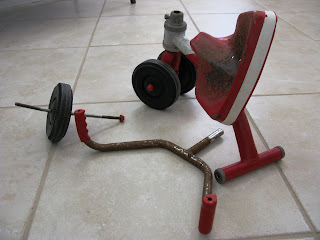 When an LMS at a middle school in Oklahoma sent e-mails regarding a package she’d shipped, I knew I was in for a treat. Something about the package was very special, I could tell. Plus she’d hinted that the students at her school were super excited for me to receive it.

So I checked my porch for it daily, assuring her that it takes a little time to get here from Oklahoma. But after ten days of checking, I was starting to get a little concerned too.

“Something happened to it,” she fretted. “I can just tell.” She was kicking herself for not insuring it. Or getting a tracking number. Or, you know, shepherding it to my door.

There was a big square of cardboard affixed to the box with her name in the return address spot, so I knew this was The Box. So before I even opened it, I zipped upstairs and wrote her an e-mail letting her know it had arrived.

Then I opened it, and what I found was a tricycle.

And it smelled bad, too.

I pondered for a moment the significance of the tricycle and the possible reason this school would be so excited to send me a smelly bucket of rusty trike parts.

A skateboard would have made sense. But I have no book with a tricycle in it. Rusty or otherwise. And although our house is furnished with refurbished antiques, this trike was not the look we’re going for, either inside or outside.

Then I saw a letter inside the box from the United States Postal Service.

It was a poorly zeroxed form letter that reminds me very much of the over-copied rejection letters I received from publishers when I was starting out as a writer.


During the processing of your package the contents became unsecured and required rewrapping. We realize your mail is important to you (yada yada…) If the contents of your parcel is [sic] not satisfactorily accounted for (send us a detailed description yada yada to): PO Box 44161 Atlanta, GA We sincerely regret any inconvenience to you. (No signature, contact name or number of any kind.)


So great. Somehow whatever this school sent me got turned into a rusty tricycle.

I took a picture of the trike and e-mailed it to the LMS (since all the world except the USPS has such communication avenues) and, just in case, I asked if this is what was supposed to arrive.

She wrote back immediately and her answer was the one I was expecting:

The kids at the school had made a “quillow”—a blanket that folds into itself and can also be used as a pillow (or stadium seat, or back prop, etc.)—that had a RUNAWAY graphic in the center of it to celebrate my book and the units they’ve done around it. There was also supposed to be a “The Running Dream” backpack that the students had sewn, plus some peanut brittle.

Someone somewhere received a quillow, a backpack, and some homemade peanut brittle, and I got their nasty, rusty tricycle.

The LMS tried to find a way other than the PO Box to contact the Atlanta Recovery Center, and there is none. And of course writing a non-person at a government agency is going to result in nothing but wasted postage. (I am in awe of how they cover all their bases here.) Still, rather than give in to the frustration of this, the kids at the school decided they wanted to redo the gifts.

So they sewed me another quillow, another backpack, and baked me some more peanut brittle.

And this time they sent it UPS, and it got here without any hocus-pocus.

Issues with government agencies aside, the real nugget in this experience is that the school didn’t give up. The kids dived back in and did the whole thing again. And the teachers made time for them to come in and use the equipment to do so. The LMS sent me pictures of boys and girls working at the machines, fabricating these gifts for me. And what’s ironic about all of this is that this school is in a “lower socio-economic” segment of their region and with redistricting going on right now parents of kids who will be newly assigned to this school next year are protesting mightily. They are concerned about the school-wide Title I program, about having their kids in the oldest building in the district, and about subjecting them to a very diverse student population.

It reminds me of Jessica’s school in The Running Dream—it may not have had the greatest equipment, and the parents might have wished for their students to be in a more affluent district or a school with flashier credentials, but in the end it was the actions inside the school—the pulling together as a family against all odds--that made the school one where students truly triumphed. Sometimes it’s the creative ways around what you don’t have that illuminates what you do, and it’s usually through struggle that kids grow into compassionate, contributing adults.

Unpacking the beautiful quillow and backpack was also a good reminder that if at first you don’t succeed (or if your hard work gets transformed into a rusty tricycle), don’t give up. Try again.

All kids should be so lucky to attend a school that models and supports this.
Posted by Wendelin Van Draanen at 9:29 PM

Aaaahhhhhhh- the postal system. Don't even get me started. Great blog- I love that you always find a shiny lining. You are a treasure!

Wow, this story gave me goosebumps! It's always amazing to hear the happy education stories. I grew up with two teachers, which meant I heard all the flaws and failures of the system. And the district I was in wasn't the greatest, either. Anyway, see you next week!

Well whoever got your mail sure was lucky! I think you're right when you say to not give up,I sure do wish I couldve heard that all the other times I've given up.with school sometimes I'll just slack if I don't understand what I'm learning.I do think that every time I give up that Gods telling me it's for the best,but sometimes it's just a screw in the mail or a cruddy paper.

You collect antiques? Ah-mazing! But anyways, it's great that the school didn't give up. I'm sure we could all learn something from their hardwork. Especially me. I have the tendency to give up on a lot of things. Lucky person who got all your stuff the first time...

USPS is so annoying! They lose our mail all the time; or it comes late, or damaged. It's gotten even worse lately...

Giving up has never been something I do but lately, with school, things have just been so hard for me! Besides the fact that I advanced a grade and shouldn't even be in the grade I am, the material is VERY hard. I'm homeschooled and the curriculum I have is already quite advanced, so sometimes I just want to give up! But I don't because I know somehow, I'll eventually get through this year.

Like Thomas Edison said (or at least I'm pretty sure): "I have not failed 1,000 times. I have
successfully discovered 1,000 ways to NOT make a light bulb." Through trial and error you will always learn something. :)

Wooww... that is so cool!
But seriously, how can they mix up a quillow and a backpack with a rusty tricycle?
That's strange!
Haha cool post!

Now I'm temped to send you my tricycle from when I was little. It's old, and rusty :]