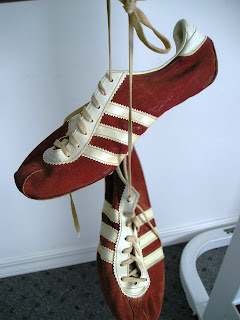 I’ve been promising information about The Running Dream. It should be something I’m dying to talk about, and in some ways it is, but in bigger ways I find myself shying away from it. I don’t even like to summarize what it’s about because the premise sounds so…tortured? It’s not tortured. It’s an uplifting story. I swear! But even mentioning that it’s an uplifting story sounds contrived to me. Like I set out to write some epic tale that will bring you to tears then lift your soul to new, profound heights. Please. I’m not nearly so clever. The only effect I can really gauge is the one a story or character or situation has on me, and the only way I can sustain the energy it takes to complete a novel is if that effect on me is substantial. The main character in The Running Dream is named Jessica Carlisle. She is not me. She wasn’t based, even remotely on me. I ran track in high school, and I ran “Jessica’s race” – the 400 meter – but that is because authors write what they know. I can describe that race with authenticity because I ran it, and remember the pain of the last stretch quite well. But this book was also never a story about running to me. I didn’t set out to write a “sports book.” Running was intended as the vehicle used to present a larger concept. It was like the train that moved me from the depot to my destination. The real story takes place inside the train as it rumbles along the track. But it’s true that the title of the book leads you to believe it’s about running. The track shoes on the cover also give that impression, as does the little detail that the main character is, oh, a track star. So I guess it shouldn’t come as a surprise to me that people assume this is a book about running – it’s completely logical. But it leaves me wanting to explain that it’s not actually a book about running, which then gets me describing a story that sounds so…tortured. Which it’s not! It’s uplifting! I swear! Authors are supposed to talk their work up. It’s actually a big part of our job. But if there’s one profession I would never choose for myself, it’s sales. I’d rather shovel dirt for a living. Way. So I’m not going to trumpet the merits of The Running Dream (or any of my other epic tales that will bring you to tears then lift your soul to new, profound heights). But I will tell you that the journey through Jessica’s life had a huge, emotional effect on me, and that during this past week promotional efforts by other people have brought some very strange coincidences to light. Most notably, my track shoes. Let me back up a second and explain that the cover for The Running Dream was presented to me as a finished design. There were several to choose from, but to me, my husband, and my editor, the one that became the jacket was hands down our favorite. It wasn’t the look of the shoes, it was the look and feel of the entire design. I immediately loved it. It wasn’t until this week when there was a request for a picture of my track shoes and I unearthed them from a box in the bowels of my garage that I realized how uncannily like the shoes on the cover they were. It was actually kind of spooky. For a moment I felt like I could have been Jessica. Not her as a person, but that what had happened to her could have happened to me. Because, really, it could happen to any of us. And even though I’d explored this as Jessica when I wrote the story, it made me wonder what life would have been like—how Wendelin would have coped—if it had happened to her. Or, you know, me. And as I sat on the floor in my garage, turning over my petrified track shoes in my hand, I had a fleeting, sort of out-of-body thought that a book like The Running Dream would have helped me through it. As small as a book would be in the enormity of such a crisis, a story like The Running Dream is a reminder that there’s light at the end of our dark tunnels. And light is what we move toward. It’s what keeps us going. Step by step. Thinking all this also made me recognize how grateful I am that—despite the profound effect the writing and research has had on me—I’ve only had to “live” this crisis through Jessica—not live it in real life. So no. Even though Jessica and I ran the same race, even though the shoes on the jacket look very much like my racing shoes, Jessica is not me. She’s just someone who’s run through my life and taken with her a piece of my heart.
Posted by Wendelin Van Draanen at 10:03 PM

I know you're an author, and it's your job, but you have such an incredible way with words. Even just this blog post made me teary eyed, and I can't wait to read this new book - you're so incredible Wendelin. As an Author, as a mother (from what I've seen/heard) and most importantly as a person. I'm blessed to know you.

Sort of like how Upton Sinclair set out to make Americans more aware of the awful conditions capitalism forced on new immigrants, but people mistook his book to be an expose on the meatpacking industry only? Like the meatpacking factories were supposed to be a medium through which the plight of new immigrants from Europe would be exposed?

Sorry for rambling. We're reading The Jungle in English and I just HAD to comment on the similarity! Even though I am certain that The Running Dream is going to be very, very different from Sinclair's book. I can't wait to read it! Uplifting tales can't be uplifting if they don't have those tortured moments. Then what would they lift you up from?

ohmugosh!!!!!!! i am SOOOO excited!!! wendelin, you dont even know how long ive been looking for your blog!!!!!!!!!!!!!!!!!!!!!!
my name is julie and i have been reading sammy keyes since 6th grade and i am now a freshman in high school and i am sooooo glad you are still writing them!!!!!!!!!! i was so worried when i finished wedding crashers(WHICH I LOVE BEYOND THE ENDS OF THE EARTH!!!!!!!!!!!) because it sounded like the series could end but then i did A LOT of searching and found your blog!!!!!!!!!! i am A HUGEEEEOO fan and im SOSOSOSOSOOSO glad that there are going to be 18 books!!! i am sad that #18 is fastly approaching, but the ride there has been so amazing and i just want to thank you for being such a great author!!! i CANNOT wait for night of skulls, although i dont know when it comes out!! have you said yet???? and you said its about death and such and i hope nobody dies that is important to sammy because THAT would be devasting!!! BUT ahhhhhhhhhhhh i cant wait!!!!
goodness, i cant even describe my happiness that i found your blog!!! OHH btw, is Flipped still in theaters?? or is it out on DVD? because i just heard about HERE on your blog and i really want to see it!! im about to re-read flipped now and i LOVED runaway!!! also, i just finished confessions of a serial kisser and that was really great too!!!!!! i loved the part where when (i think its andy??) he writed evangeline a note asking "are you ok" and how evangeline (you :D) thinks "its completely unethical and anthropologically incorrect for guys to ask girls that question when they are mostly the reason the girl is NOT ok!" (im paraphrasing) it was pretty great :D:D
SO YAYA FOR FINDING YOUR BLOG!!!!
<3333333sammykeyesta(also love that nickname!!!!!!)
<3julie<3

3julie3 -- I think I speak for everyone here when I say welcome aboard! I know this blog isn't easy to find...but I'm glad you did. To answer s ome of your questions so you don't have to dig through all the posts...Night of Skulls comes out next October, and Flipped has finished its theater run (sorry!) but comes out on DVD today!

Ashlee: Hugs sent! I hope I get to meet you in person on tour :-)Can you get to Seattle?

I cannot wait to read running dream! It sounds so uplifting and hopeful. It sounds like it's about running to your dream and catching it no matter what obstacles come in your way. The road to a dream is rough, but you can always jump over the potholes. Running Dream seems like a wonderful book. I bet it is :D!

That would be incredible. It depends on when you'd be in Seattle. it's 4 hours away, but...I'm a pretty determined person at times. I just have to be able to afford the drive! :)

ur welcome!:)actully i have more in it but i didnt wanna give off alotta personal info so i just did the 1st 3 letters

and i don"t know if i spelled all of those spanish words correctly, even though i'm mostly hispanic, but whatver. just say it's a new word. ;D

and welcome to the super cool, slightly wack club of SK+CA and wendelin fans, julie!!!!!!


Hello, my name is Makayla Klann, and I am writing an article for our school newspaper, The PawPeratzii. I got entertainment for my category and I thought that it would be cool to write about one of my favorite books and the author of, The Running Dream. This book was an amazing book. I loved the book and I can’t tell you how many times I’ve read the book. If it is okay with you I would like to ask you a few questions about how you wanted to become a writer and everything.


Question 1~What or who was your inspiration to write such an amazing book?
Question 2~Where do you get your ideas from?
Question 3~What is your writing process like?
Question 4~What advice do you have for young upcoming writers?
Question 5~Does writing energize you or exhaust you?
Question 6~Do you try to be original or give the readers what they want?
Question 7~How did publishing your first book change your process of writing?
Question 8~What’s the most difficult thing about writing characters from the opposite sex?
Question 9~How long were you a part-time writer before you were a full-time writer?
Question 10~What one thing would you give up to become a better writer?
Question 11~How many hours do you write a day?
Question 12~What's the best ways to market a book?


Thank you so much! Looking forward to your answer!!

Hi, Makayla
Could you send the questions to the CONTACT form at my website? (wendelinvand.com) -- email is way better for this than blog comments. Thanks!