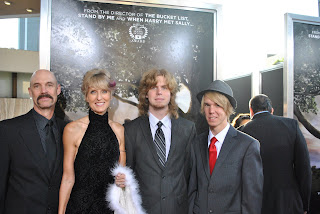 I love you so much! Who you are just shines through your writing, especially this blog. Plus, in the video I noticed the awesome purple streak in your hair which made me love you more!

It sound chaotic but fun! What was your favorite part (besides seeing Flipped)? Your hair looked really cute! I liked the streak of pink/purple! I cannot wait much longer for Flipped! It looks so awesome! Thanks for posting!!!

sounds funnnnnn! :D
yay you took anonymous off. In the past week I've been spammed and hacked. Yeah not so fun :(

anyway. I reread alll of Hollywood Mummy last night and i've never been to Hollywood. I wish! :( it sounds like so much fun. I can't imagine being an author of a book and seeing a MOVIE of it. Hopefully when I grow up I'll be watching movies I directed by myself. Directing is one of my dream jobs XD besides being a photographer and author but I don't think I have enough patience to write a book. And I'm not THAT amazing with a camera. So whatever. We'll see.
Anywho. Yay:D so I guess there was no Johnny Depp? Ahhaha just kidding.
I'm in a really bad mood, and I've been faking being happy all day, so I better go. I feel sick an guilty and upset and I'm not in the mood to do anything anymore. I hate life :(

I'm so embarassed. You're like my favorite author and i really respect you, and some anonymous person has embarassed me in front of you. I think I may go change identities or something. I feel violated. :(

It sounds like it was crazy, but fun! And did you say the WOMAN WRITING THE SCRIPT FOR CONFESSIONS OF A SERIAL KISSER??? Didn't know that one was in the works for a movie! XD. And you looked gorgeous, and the purple streak is awesome, and your answer about your beauty secret is perfect. Just perfect. I'm glad you enjoyed the night, and thanks for sharing it with us! And thanks for responding to my email as well, I really appreciate it :).

I love, love, love the Sammy Keyes series! :D It is AWESOME! I literally cannot wait until Sammy Keyes and the Wedding Crasher comes out! It sounds like your red carpet event was awesome! I was wondering...when did you decide you wanted to be a writer?

You didn't tell us anything about Confessions of a Serial Kisser becoming a movie! Why not? I mean, in other posts. I want to go to Hollywood some day. But first, Santa Maria. That would be nice. Anyways, um, I forgot. Oh yeah. Do we send you fan mail by using your email address? The one up gave up there?

Wow. It sounds like fun... I've only seen the outside of the theater you went to!
I can't wait to see FLIPPED! Its gonna be an awesome movie, I can just tell!

That was SOOO COOOLL!!!!! It seemed hectic. How did you even manage to talk to all of those people and get to the theater? Anyways, I also have to say that your dress and shawl-thing was so cool! And the pinkish-purple streak! Can I be all Joan Rivers-y and ask you who you were wearing? (ahahahahaha--I've been interested in clothes and such lately, but basically more like how clothes can be used to say things about yourself, others, etc. CLOTHES SHOULD NOT BE ABOUT FOLLOWING TRENDS [and yay Sammy won "Most Unique Style"! ahaha :-)])

Ahem. Can't wait for the movie! And COASK! I loved the book. It was hilarious! (and Swear to Howdy was good too! Even better than I thought it would be!)

I WILL FLIP IF FLIPPED DOES NO COME OUT SOONER. I loved the purple streak and it was so chaotic. Its like lunck yime on my old public school. Food fights might LOOK fun but its very uncomfortable from under the table. Poor Aylleen got orange in her hair. She had a headache for a few days after that. And you looked soo pretty!

I don't think I ever mentioned this but I think you're amazing for naming an SK book off of a Jimi Hendrix song, i mean, if you even did that on purpose. But when I first read Wild Things and came to the part where Casey sang the song, I was like OH MY GOSH LOOKIE HERE. It made me love Casey more cuz if he listens to Jimi Hendrix he's gotta be awesome right? My older sister always insists that Casey should be in a band. Why? Because he apparenty enjoys singing at random moments lol.

Btw it was 3 am yesterday morning, I was reading Moustache Mary and I was getting sidetracked by my evil cell phone and my friend texted me saying about something, "If you locked Paige in the closet because she didn't listen you..." and it made me think of Manny's family locking him in his room so he could get over Lucinda when he didn't really, and THAT made me think of how Heather hates that Sammy and Casey are friends and then I had a revelation. You should have seen me, i was just sitting there like an imbecile, screaming in my head because I hadn't realized it before.
And I know you wrote the books and all so this is pointless to even ask cuz I hate it when teachers try to get in depth with the authors' "meaning" of a line or you know, all those morals and hidden lessons that don't make any sense at all really. But I was just wondering something...
You know how you wrote about Manny and lucinda meeting each other a party before they knew each other's last names or whatever. Then when they found out that they were both part of families that hated each other, they still didn't care no matter how much they were forced to break up or whatever? And then Johnny James, Manny's brother hated Lucinda a lot and wanted to kill her and accidentally killed Manny etc etc you know it all of course lol you wrote it after all. So yeah. That little story goes REALLY well with the situation between Sammy and Casey and Heather and all. You know, Sammy met Casey at a party and liked him as a person before she even knew that he was related to Heather? And then Sammy and Casey are friends and Heather is losing her mind trying to break them up. Well, not break them up cuz they're not even together, but you know, get them to stop being friends. Like the note in Art of Deception and the horseshoe.
Well I just thought the similarities were more than ironic and I know it's stupid of me to notice that little detail NOW because I've reread Moustache Mary like seventy times now so I've been pretty much a moron.
I hope Heather doesn't accidentally kill Casey. :c

Um yes. That is all.
So my question is basically, is that similarity supposed to be there or is it just irony or something? Sorry, sometimes I really can't tell what an author means really. :c


Sorry for the stupid post. I'm an idiot I know, and I really can't keep my mouth shut for more than four days. I was gonna wait until your next post to ask you that question about the Huntley/Murdock & Keyes/Acosta connection but I could not hold it in my mouth.

I know the original Wild Thing song wasn't made by Jimi Hendrix but he did it best in my opinion. :P I also like The Troggs version but whatever both of em are good.

im bacckkkk from IDAHOOO!!! anyway, i am about to cry! i feel so amazed that i've been able to read all about this whole Flipped journey from book to big screen in your blog posts! when me and my friends see it i'm gonna be all like 'yeah, i knew all about this movie before you guys' XD i love your son's hair and the other son's hat (: and again, you remind me of my friend's mom and also lisa kudrow a little. great post (:

i saw flipped and it was SOOOO good and a lot like the book. i loved it!!!! i have three posters in my room for it!!! i saw it with my sister and mom we all liked it!!!