Luck of the Draw 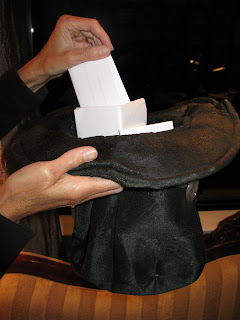 I want to thank everyone who sent in answers to the little Sammy quiz. If you have won an ARC of Sammy Keyes and the Wedding Crasher, you have been sent an e-mail letting you know you won. So for a lot of you this is a bummer moment. I am sorry! (I sent e-mails to respect the privacy of the applicants, as most of you don't use your names on-line, which is wise.) It's fun to inform the winners, and zero fun to break the news to the people who haven't won. (Again, I'm sorry!) I wish I could give all of you copies!
Actually, there were 5 recipients instead of 3 because there were WAY more applicants than I'd expected, and Random House kindly upped the ARCs to 5.
Not that this makes the rest of you feel any better. (I'm sorry!)
In case you're curious, the answers I was looking for are:
1) (Hotel Thief): After Sammy spotted the thief in the Heavenly Hotel, what action of hers started the turmoil? She waved.
2) (Skeleton Man): Why did Sammy go into the Bush House on Halloween? (INto, not UP to.) The reason was the fire.
3) (Sisters of Mercy): What clue did Gregory give Sammy? The cold carrot
4) (Runaway Elf): Where did Elyssa keep ‘disappearing’ to? The cemetery
5) (Curse of Moustache Mary): What was Lucinda Huntley’s pet? (Penny the) pig
6) (Hollywood Mummy): Name as many “mummies” as you can! Inga, Claire, Lana -- some of you went wild with this, which was cool. But because it was a confusing question to many of you, I gave a lot of leeway with answers. Lana was a play on the British mommy.
7) (Search for Snake Eyes): What is the William Rose Junior High mascot? Bullfrog
8) (Art of Deception): What kind of fair do Sammy and friends meet up at? Renaissance Faire
9) (Psycho Kitty Queen): Who has the same birthday as Sammy? Heather
10) (Dead Giveaway): Sammy and friends go to the end of the year dance dressed as what?Pirates
11) (Wild Things): In the beginning of the book, Sammy has no idea why anyone would bother to save this animal from extinction. Condor
12) (Cold Hard Cash): At the pool party, who has the same swim suit as Marissa? Heather
BONUS:13) (Wedding Crasher): What color are the bridesmaid dresses? Lavender
14) Sammy Keyes Song: “Officer Borsch acts like his squad car’s a Porsche and thinks that all kids are delinquent juveniles...”
By the way, I was very impressed with how many of you got them all right, and laughed out loud at some of the answer add-ons -- like Oinkers in Love! and Heather, of course! or That nasty witch Heather!
Also, it was interesting to me to learn how far away from each other you "Sammiacs" live. There were people from Switzerland, Korea, and South Africa who couldn't participate (I'm sorry!), and those who did send in answers live all over the USA. Because we meet here I think of you as being in the same vicinity. Like, we all hang out in Sammyville, or something. But you're everywhere!
Coincidentally I had to go through the final (?) rewrite (the re-copy-edited version) for Wedding Crasher last week, and those of you receiving ARCs will find the differences between the ARC and the final book very interesting. One suggested change cascades into the need to make other changes. Even in this late state of the process, I wound up changing a name (because of a change in nickname at an earlier go-round). There are more subtle differences too, and for those of you interested in the fine-tuning process of novel writing, you'll be fascinated to compare the differences.
One last thing: Those of you receiving ARCs, PLEASE don't spill too much about the book. I know that will be hard, but I really don't want to wreck the ending for those who can't get the book until October.
Thanks again to everyone!
Posted by Wendelin Van Draanen at 9:16 PM

So, did you send out an email to everyone who participated? Whether or not they won?

No, sorry. Just the winners. It's a lot to sort through for me. And I didn't want to give a moment of false hope.

Omg xxcammylover has no patience to login. said...

Ok my stupid iPod isn't listening, the keyboard won't switch hen I turn it. Anyway I was literally going to collapse when I was in the process of you know, loading the screen to the email homepage, typing in the password etc. I thought I'd be like reeeally upset if I hadn't won but I was unusually calm. Strange. So anyway October isn't so bad. Just 120 days away. Well congrats to everyone who wonnnnnnnnnn!! :D rememberrrr DO NOT SPOIL ANYTHING OR I WILL PERSONALLY RAMPAGE YOUR HOUSE AND INVADE YOUR PANTRY IF YOU DO. just kidding of course, some people take things literally. So farrwellll. :)

Sammyville. I like that!
You shouldn't be surprised that Sammy was spread across the globe. It's because of your books' pure awesomeness!
But did you know they changed most of the names though? I read in english, but my friends read in french and instead of "Sammy Keyes", it's "Sara Kay", and "Heather" became
"Hazel" and "Dot" was "Mouche" and so on...
I just don't get why they do it!

Wah. Oh well. And I'm getting hungry so I WILL invade your pantry if you spoil it. Can you believe it though? I actually FORGOT TO ENTER. That's how stupid I am. I thought that you didn't have a chance to enter yet. I almost started crying when I saw this.

I hope you know who CCG is cuz my momisreadingthis...

Funny about the French. They're supposed to clear changes like that (with me) before they make them, but did they?
No, no.
Was I a little miffed?
Oui, oui!
But my agent told me to just trust that they knew what their "market" would respond to, and sales there have been pretty good, so maybe they do. I guess a girl named Sammy is too confusing for France's young readers?
Whatever, it's fun to hear from someone who (knows someone who) has read them in that language.

I Kinda wanna read the French one just for the names now haha. :P well I don't know French... Actually I took classes earlier this year but me and my friend just stopped going in the middle because we're in all AP classes (and with Spanish on top) it was acting "negatively" towards our grades. Oh well, my mom knows French so maybe i'll get her to read one. I wonder why they did that? Sara Kay? Lol okay then... :P

I kind of knew I wasn't gonna win, only because I saw the blog post yesterday.
But I'm not that sad, there's this fun feeling when you want something.

Just out of pure curiosity...about how many entries did you get?

PD: Great attitude :-)
And I had no idea I posted last night. I wrote the rough draft so I could post early today...must've accidentally clicked Post! Didn't send the e-mails until this morning...Oops...!

Did you get the one with links?

Yes I did, and I've been planning to e-mail you and say how cool that was. Although one of the links was broken and it freaked me out because it kept regenerating the page and I thought I'd been sniped. But it was an innocent error and the submission was very thoughtful (and cool). And I know it was a lot of work!

Wehat were the links of?

i'm actually kind of surprised that there were only about 40 applicants... this has been my one of my favorite series for a long time... like sammy, is my ultimate role model... so i really surprised that there weren't double that amount...
but yea... i can't believe that i actually forgot to enter like CCG... i sent the email today anyways just to let you know you have one more fan but i'll just wait until October

LOL, I have all the blogs that I follow in a folder in my favorites called "Blogs" but for some reason I have another folder titled "Author's Blogs" that I didn't put inside the blogs folder and I always forget to check that one. From now on Author's Blogs is going into Blogs.

So they didn't clear this with you? Ugh.
And the cover art the cover art... it was well drawn, but they allways put the image of a blond girl with plucked eyebrows on the cover... I guess the illustrator didn't read the books well did he?

Ahh grr.. i forgot to enter too!i even answered the questions! oh well, :) October seems far away but it rlly isnt that bad of a wait :) congrats to all who won! hopefully there can be some more contests like this :) it was pretty fun!

My calender mocks me. It really does. So far. So very far. I'm on the floor typing this just to be more dramatic. *sigh* I should be in my school's plays. Curse the dreadful virus this world calls "shyness".

Was the Lana thing in the book for her being a mummy... because I wrote that, but I was trying to be cool and write corny jokes the whole time, but I am curious if you were actually thinking of that as an answer when you wrote the question?

Hi i am so upset!!! I was to late to enter! Oh well! That sounded so cool for all of the people who got to enter! I also thought that WAY more people would of entered!

CAN'T WAIT FOR OCT.! Even though it means school.

I know, right? I won't survive.

Neither will I. But if we don't survive, then we can't read it. So, I'll do it. I'll be strong...a little. I have to go pray again that I'll survive.

just curious... are you ever making a sammy keyes movie?

Sorry the replies have taken this long! Let me dive in:

# of entries: I was surprised that there were so many, not few, because until recently this has been sort of a "secret blog". I don't promote it anywhere and it's not easy to find!

"Mummy" for Lana was one of the ones I was looking for, but since it was a joke in my mind, I wasn't expecting as many people to include Lana in their answers as did.

The French: Yeah, I say they changed her name and made her look like an angry Nancy Drew. But apparently French readers don't mind!

NYA: I want you to know that I was VERY shy all the way through high school. You'll break out of it, don't worry. An electric guitar can help :-)

October: Forget about it! Get out and enjoy summer!!

Movies: Eventually, probably. Not in a rush, that's for sure. I want to finish the series...

Thanks to all of you for checking in!

Hi, I just wanted to say that I've read some of the Sammy Keyes books in swedish, and some of the names are a little different in them too. Dot is named Pricken (which is swedish for 'the dot'), the spelling of Sammy is different (they've spelled it 'Sammie' for some reason), Sammy's mom's named Lena and Gil Borsch is named Gil Borst. So no big differences, just small ones that I don't really get why they bothered to make. Anyway, the Sammy Keyes series is great, I read some of the books in the series when I was like twelwe, and I bought the ones I didn't have a while ago and read them too, and even though I'm 20 years old I totally got into them. Such cool books shouldn't be just for children, so I will keep reading the Sammy Keyes series and keep hoping that September will pass really fast so that another SK book will be out :)