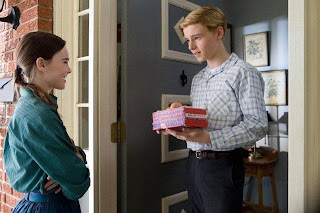 I just got word that the Flipped movie will be in wide released, not on September 17th as previously stated, but on August 27th. So mark your calendar! Tell your friends! Plan a party! Go! (I'm planning to serve popcorn, drinks, and Peeps at mine.) (And if you're asking, Why Peeps? you really need to go read the book!) And now, a little inside look at how moving the release of the movie up three weeks (or, really, six, as it's in limited release on August 6th) can send a publisher into a mad scramble: As you know, when a book is made into a movie, the book is reissued with a movie-related likeness. You know, they take the movie poster, or part of the movie poster, or the actor images, or whatever, and that becomes the movie-tie-in cover of the reissue of the book. They also will often add bonus features. Like pictures taken during the shooting of the movie, an interview...something movie-related. Now, in order for the publishing house to do all this, they need to coordinate with the movie production company and get the art and permissions and all of that. If there is no movie poster, it's hard to generate a book cover. If pictures are not yet available, it's hard to include them inside the book. And since a publisher wants their movie-tie-in issue to be available a good six weeks before the movie is released, and since it takes a couple of months (at least) prior to that six weeks to print, bind, and distribute the book, Random House was crunched to go to press next week-ish to print movie-tie-in issues of Flipped for the September 17th release date. Which means that next week-ish is already three weeks (or, really, six weeks) behind! And, as of Friday, there's no finalized art; no pictures. I'm sure it will all figure itself out. Or, rather, that people at Random House and Warner Brothers will figure it all out. But being new to this, I tend to try to move things along by worrying, which is, of course, completely ineffectual. So that's where we are as of tonight. I really do have a lot more to share about things related to this, but it's late and I've got miles to go before I sleep so I'm afraid this is all for now. I really appreciate your checking in. See you next week!
Posted by Wendelin Van Draanen at 9:38 PM

Cool! I wish I could watch the movie even though I dont live in the US...

...I actally have been following this blog ever since someone mentionned it on a fanfic...

I love your posts! They're something I look forward to every sunday!

Can hardly wait! Hey, I should have been the photographer! Would have had them ready by now. Just tootin' my own horn. Really excited for you!

YESSS! Oh my gosh I'm just reeaaallly hyper when I see your posts. I had to read your post this morning on my dad's phone before I went to the school yard. I was so happy and stuff and reaally hyper so my teacher sent me to the nurse...for the fourth time this month actually. The other three times was for laughing too much during silent reading time. How can I NOT laugh when I'm reading Sammy Keyes? I'm sooo happy that Flipped is coming out soon! Its coming out five days after my birthday. Aaaand my birthday is on Sunday so I'll ask my parents to let me stay up later so I can read your post. Time zones are SO annoying sometimes.

Any information on when a trailer will come out?

Yay! I'll definitely have to reread the book and go see the movie! I can't wait to see the tree--it was always my favorite part of the book. I LOVE TREES!

Congrats on the entire process, to you and all of the other people who made this possible! Woohoo!

OMG! I can't wait! So... are you planning on letting them make a Sammy Keyes movie? Cuz that would be superfantabulistic! Ugh, I don't want to wait till August!

YAY! That looks sooo cool! Wait tell me if I'm mistaken... but shouldn't the boy have black hair... and blue eyes or something... maybe I'm confused.?

Thanks for updating us! I can't wait for the movie to come out :). I hope all of the work that has to be done so quick turns out great, and that no one has a mental breakdown in the process... thanks again,

Ahh! Excited. :D Sorry for posting so late, is it already Tuesday? I feels a Monday. :/
I was talking to my friend Alex in class yesterday about Flipped, and one of my friends, he turns to us and he's like, "Flipped? That's becoming a MOVIE!? I LOVE THAT BOOK." it was sort disturbing at first, but oh well.
At first, when I first heard about it my friend Colton promised to take me, but now that plan is kinda over since I have a boyfriend.!:D(HisnameisNate!) Annd this week has been weird since I made a weird desicion and dyed my hair blonde. I'm doing my friend's hair tonight! Anywho- I cannot wait for like a million things this summer and next fall!) Here is my ever-growing list:
-3OH!3's NEW ALBUM on June 29th! :D Love emmm.
-Miley's new album on June 22nd! (I admire her, I know, I'm a geek.)
-The Lightning Thief DVD in the summer! xD I wanna see it again so badddd.
-The Last Song DVD (when is this coming out?)
-Flipped movie! (GAhh, I might die)
-Beezus and Ramona movie! (I do not like Selena Gomez, but I used to looove Beverly Cleary and her Ramona books when I was in grade school. I still love that author, she was my first role model to being an author, then you came along.) ;D
-Eclipse movie in June! I'm so, fahh, sick of of Twilight, and Taylor-Lautner-OMG-his-abs-his-six-pack WHO CARES. And Edward and his sparkly vampireness. Gahh-hatehate. But I'm still excited. (;
-Heroes of Olympus series release daaaaay! (Same day at Sammy-Keyes-and-the-Wedding-You-Know-The-Rest)
-SAMMY KEYES AND THE FUDGING WEDDING CRASHER!! ! This is, by far, my favorite thing I'm looking forward to!

Sorry, super long post. I just needed it let it all out. :)
-Stephee.

You're not a geek, Stephanie. I AM. I'm being serious. "Jennifer, why do you like books so much? And why don't you read Twilight?" Becaaauusse. I'm too busy reading Sammy Keyes. I cannot WAIT for Sammy Keyes and the Wedding Crasher! Aaaand. This summer, my parents are FINALLY taking me to a Rennaissance Faire! YEESSSSSS! I'm all hyper again! Hmmm...maybe I'll find a horseshoe. Aaaand. I'll be wearing my high tops there with my dress...!

i am so going to see that on opening night. my 6th grade teacher recommended Flipped to me for a language arts reading log thing. we had to fill out a reading log for one month and we had to read books we had never read before and we couldn't have the same book twice on the log. i kept asking her if i could put flipped for the whole log but she said no. but, actually, in the end, the whole reading log consisted of your books. seriously, i read flipped, sammy keyes books, confessions of a serial kisser, swear to howdy.... the "author" box just had "wendelin van draanen, wendelin van draanen, wendelin van draanen" down the whole line.
is a teaser trailer for flipped out yet?

awesome! I'm a HUGE fan of all of Wendelin's books. I'm so excited! I've been thinking that there should be a movie to one of your books. and now there will be is! :)

I just got off work, and I'm reading Snake Eyes, which I finally bought, tonight :D. At least till the Survivor finale comes on. I hope assembling the reissue of Flipped is going ok :/! Thanks for keeping us all posted,

It must be so cool to see your story come to life =) Now, if only we could do that* for Sammy...

*did you know that Girl's Life magazine did a segment on Sammy? (it was an interview, note the fact that she denied Casey being her boyfriend ;)) And there was a picture of Sammy next to the article...! It was this pretty little girl with sleek brown hair and such. I was thinking, No! that's not Sammy! they better not be casting her for any future movies!

*the movie's supposed to summarize the events of Avatar season 1 =)